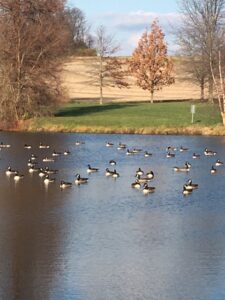 The winter wren is back, quick

Among the tree roots by the stream,

Feeding from stem to stone to stick,

And in his late return the rhyme

Of years again completes itself.

Today’s high temperature distribution: 60s on ten percent of the days, 50s on 30 percent, 40s on 45 percent, 30s on 15 percent. Skies are overcast two days out of three; rain falls half the time, and snow is unlikely. For the first time since March 20th, average low temperatures fall below freezing.

On November 23, the Sun enters the Early Winter sign of Sagittarius. My notes from the day offer a thin composite of impressions for that transition in Yellow Springs. Like most of the days this week, the 23rd is a narrative of migrating blackbirds, restless geese, the gathering of crows in the fields north of town, the continued shedding of the red-gold pear leaves and the sienna beeches, the flowering of witch hazel, the collapse of bittersweet pods. Sometimes it is like a soft September day, sometimes one of hard frost, sometimes a day on which sandhill cranes, forecasting the last cold wave of the month, pass above Yellow Springs.

1989: Downtown pear foliage still red and full. Geese fly back and forth every day. The red-orange Christmas cactus is in full bloom, the white maybe a fourth.

1992: First junco at the feeder, another tan finch too, cardinal singing for a while at 8:00 this morning. Mock orange, lilac almost all gone, forsythia more than half fallen. Downtown pears hold at maybe two-thirds. Housefly in the greenhouse. Red-orange Christmas cactus full bloom, and the white one has five flowers open.

1994: Finally, three days before breaking a record, Yellow Springs experienced its first hard freeze of the fall, temperatures into the 20s. Many of the white mulberry leaves and the Osage near the shed held on until last night, then with the cold, they all were down by morning.

1995: To Chicago: the trees bare throughout, even the willows and most of the oaks. No forsythia, only a few honeysuckle leaves left. Scattered flocks of pigeons and crows, a few geese, cross over the highway.

1997: Walking downtown, blustery afternoon, clouds and sun, wind from the northwest. Forsythia leaves were thinning, but one bush on Limestone Street was almost in full bloom (our bushes only had a single branch with blossoms). Up Dayton Street, the witch hazel was still in flower. Bittersweet berries holding along the sidewalk.

1999: First almost ripe tomatoes discovered at the west end of the greenhouse. They had been hidden by a red geranium. Outside it’s so warm that I have the back door open. I can hear the crows west of town. These are the shortest days of the year, twenty minutes from solstice, but there is so much sun and light it seems like summer. A cabbage butterfly looking for nectar in the South Garden at 1:45 this afternoon, the latest in the year I’ve ever seen one. A yellow jacket reported in town. Late this afternoon, I came across a long flock of blackbirds, perhaps a mile in length, following the freeway south.

2000: Crows at 7:11 a.m. Hosta leaves finally collapse after nights in the teens and twenties. Osage holds but burned.

2003: A cardinal at 7:04 a.m., sky partly cloudy, temperature in the 50s. Pear trees have most of their leaves, red and yellow, along Xenia Avenue. The Dayton Street beech only has its lower foliage, golden.

2004: Cardinals singing off and on throughout the morning, the skies gray, temperature mild in the 50s. Greg called this evening: he’s still watching the skunks come to his bird feeder.

2006: By today, almost all of the pale hulls of the bittersweet have fallen, leaving the bright orange berries.

2007: Jeanie and I went to my sister Tat’s house for a family get-together in Wisconsin, and we arrived the night before Thanksgiving just as the wind picked up and rain turned to heavy flakes of snow. By morning, the sky was clear and the air was sharp. The ground and rooftops were white, all the leaves down and covered from the storm.

Before breakfast, I went walking with Bella, our border collie. The sun had come up an hour before, and it was shining through the bare trees. Crows were calling from the bike path behind my sister’s house, a house that was only two blocks from where our parents had moved in the early 1960s.

I walked down the quiet Madison backstreet, surrounded by a sense of being completely at home. Something in the way the wind blew, some familiar scent or smell I couldn’t identify, carried me to a childhood state of comfort and belonging.

Then, high above me, I heard sandhill cranes. I looked up to see them in a ragged formation maybe half a mile high, flying hard with a northwest tailwind into the sun and crying their rattling, trumpet calls. The adults and their offspring, having spent the summer in the northern wetlands, might have been heading toward Yellow Springs on the way to wintering country in Florida and the Caribbean.

I walked a little further with Bella, and then I heard them again. This time, the cranes were in a perfect “V” and, it seemed to me, flying even higher and faster. They would certainly beat me to Ohio, I thought.

2011: Crows after 8:00 a.m., cardinal calling in the back yard at 9:15. Rivers very high from days of rain, and the precipitation moves east, snarling Thanksgiving travel. About a third of the Osage and honeysuckle leaves left here at home, honeysuckle berries continue to fall all to the sidewalk, many still holding to their branches. On the way to Wisconsin this afternoon, just one hawk, two flocks of starlings seen.

2012: Liz Porter wrote at 2:10 p.m.: ‘Two sandhill cranes flew over my house as I was hanging suet up in the maple tree! They gurgled/clucked/purred a little bit, and were high up going fast to the south and slightly east.”

2013: Twenty-two crows came from the northeast in a tattered, broad pattern, the last bird flying late, calling to the others. Along Stafford Street, robins peeped in the honeysuckles, and starlings whistled in a bare maple.

2014: On the way out of town around noon: A huge flock of starlings and lots of crows feeding in the cutover soybean fields along Dayton-Yellow Springs Road. No other flocks seen between the village and Cincinnati.

2015: The Osage leaves came down throughout the day, an end to autumn in the yard.

2017: Sun and mild in the low 50s in Madison, Wisconsin. Jill and I walked along Lake Winga, a little ice on the water, no ducks.

2020: Sun and chilly: Crows before sunrise. More than 200 geese on the pond, the full winter contingent.

Then some day here come the cranes

planing in from cloud or mist—sharp,