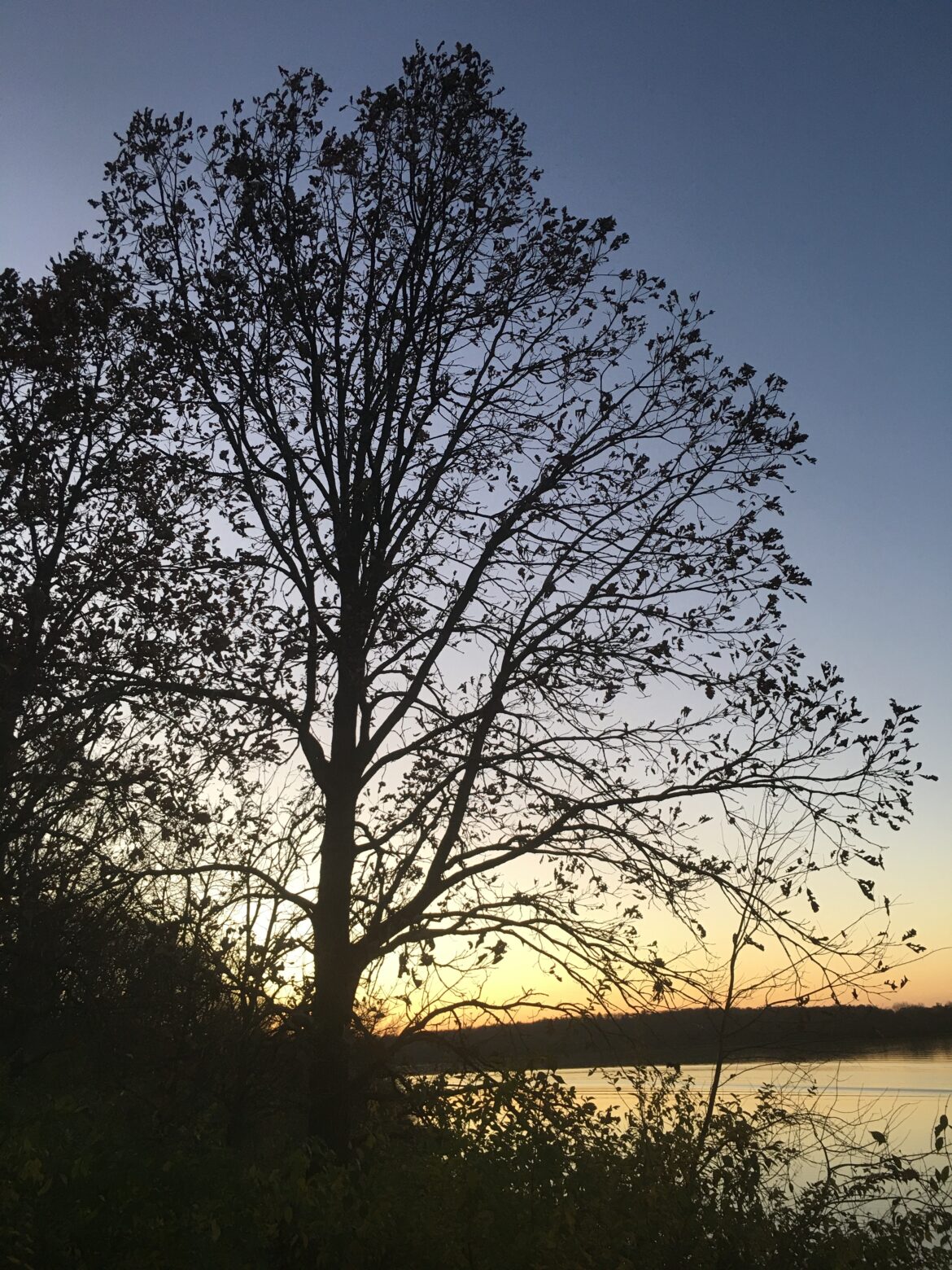 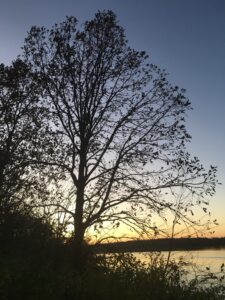 Rolls round the seasons of the changeful year.

Chances of snow are 15 percent, for rain 35 percent, and the sun breaks through just 50 percent of the days. Highs are in the mild 60s on 30 percent of the afternoons, in the 50s twenty percent of the time, in the 40s twenty-five percent and in the 30s another 25 percent. Low temperatures remain above freezing half of the nights.

1982: Despite all the cold, mums are still bright. Mallow, one pansy, some parsley, petunias, calendulas, alyssum, chard, broccoli, chives hold, too; the kale is even growing a few new leaves. The roadside grass is mostly brown now, only patches of green. Seed heads of Queen Anne’s lace bow to the ground. All but a handful of leaves gone from the tall Osage in back, and the mock orange, and the pussy willow. Some forsythia almost bare, others have half their leaves. Privets are still solid, but their leaves are a yellow-gray-green.

1983: Bee flying around in church this morning. Large fly in the house. On a drive into Dayton, I saw maples with more than half their foliage, also poplars. There was a marked difference between the partially clad city and the bare country.

1988: Raspberry and black raspberry leaves almost all gone, also mock orange. Some honeysuckle branches are bare, red berries thick. All the pear foliage on Xenia Avenue has come down in maybe five days. A few sweet gum leaves, yellow and red, holding. The yard grass is bright green like the pastures and winter wheat. Squirrels chatter in the morning, few other birds. Tornadoes out of season destroyed towns in the South yesterday, and a week or so ago.

1991: Road kills increase in the mild, wet weather: three opossums in three days, rare this late in the month.

1992: South Glen, sun, middle 60s: Ironweed seeds half gone. At Far Hole, all the Osage fruits and leaves are down. A cardinal singing on the other side of the woods off and on through my walk. Loud calls of a pileated woodpecker. At the river’s edge, the water is rippled blue, black, green and brown, tree branches tangled in reflections. One bluebird sighted. A tan moth, maybe an inch in wingspan fluttered from one clump of leaves to another, almost like a grasshopper. Three dandelions seen along the way; they are like overwintering robins, stragglers showing up through the fall. One burst milkweed pod, silk dangling. At High Prairie: a field of goldenrod seeds covered with dew shining in the sun, fruit far more exotic than its flowers. A few small oaks hold here, chocolate brown. Moss has new sprouts on an old log. Banks of box elder seeds shimmering. Most wingstem seeds hold, but all are fragile. Burdock burs hold, strong. All but one or two shriveled staghorns are gone from the sumac, thistles bedraggled, most undone, scattered, foliage curled and shrunken like dried seaweed. Small brown spider in the leaves. Thimble plant unraveling. In the front garden, more crocus planted.

1995: After a very cold few weeks, the sun is shining, the temperature up into the low 50s. On the way home from Wilberforce, I saw three orange and black woolly-bear caterpillars crossing the road – today is the latest I’ve ever seen them. I planted the garlic patch this afternoon, about 150 square feet of space. Jeanie reports the crows are congregating west of Springfield, the earliest we’ve noticed them arrive.

1996: November’s beauty is the first of April’s, green of last leaves shining, the first leaves of the year. Sweet rocket high and bushy,

1999: The New England aster leaves have yellowed, and some of their seed heads are tufting. A few poplar and lilac leaves hold on in the south border. The cold front of the 19th passed through last night, this morning clear and serene. First birdseed (thistles) put out today.

2000: All the white mulberry leaves are down. Ginkgo finally gone at school. Ice on the pond.

2001: People ask me about why I give the moons different names in my almanacks, but a person’s own steps and phases could be named according to the visible or invisible landscape, like named moons, guiding each observer in private seasons. If there is little difference between the mind and what it sees, then the creatures of the world and their names in our mindfulness become both cause and effect, impeccably binding us together in a strange stability of ephemeral beauty, passage, birth and death.

2002: Lil’s maple leaves have all withered, but many remain on their branches. Jerry and Lee’s sweet gum is bright yellow. In the south garden, one stella d’oro lily blooming. Two yellow roses and one pink achillea are open in the north garden.

2003: Jerry and Lee’s sweet gum has lost almost all its foliage but is still one of the few trees along High Street to have any leaves at all. In the north garden along the wall, the purple scabiosa has withstood the hard freezes to outlast all the other summer flowers.

2004: Fragments of burning bush foliage remain here and there.

2007: Ginkgo leaves collapsed on Rachel’s tree two days ago; the larger ginkgoes along Xenia Avenue are about half down today. Red-gold pear, sweet gum and oak foliage is prominent throughout town and south into Wilmington. I saw a large flock of blackbirds or grackles yesterday on the way to Cedarville.

2009: Rachel’s ginkgo and all the others in town have been bare for at least ten days. The morning has been quiet: clouds at four this morning, then clearing suddenly, Orion in the west, Gemini above, the Dipper deep south of Polaris. Now a hazy peach sunrise.

2010: I got up late this morning, after 6:00, and Venus was well up over the Danielsons’ house into the empty branches of their maple. Jeanie’s young river birch in the back yard is down to just a small fraction of its leaves (while the birches near the shopping center have been bare for weeks), and the honeysuckles are dwindling quickly, berries more prominent now than their yellow leaves. The Osage foliage has started to come down here, but our tree is far more stubborn than those along the river.

2012: Yellow Springs to Madison, Wisconsin: The back yard river birch has only a skeleton of leaves this morning. The sky cloudless, dusky haze throughout most of the trip. I passed through areas of fog twice in the plains of Illinois, and wispy cirrus appeared as I approached Wisconsin. The landscape uniform throughout, all the fields but one cut over.

Willow trees – which still held their brown-green leaves in Ohio had lost most of their foliage by the time I reached northern Illinois. Three white-breasted hawks seen along the way, but only one sizeable flock of starlings, other small flocks on high wires. The weather was mild, and I drove with the heat off, my jacket off, and the windows open for hundreds of miles. The roadside grasses became browner the further north I drove, but hemlock was bushy in patches throughout the trip.

2013: Jeanie’s river birch is bare except for a few shriveled leaves that hold on. Two brown leaves left on the blueberry bush. I planted crocus in the dooryard garden late this afternoon. Winter wheat showing in rows in fields between here and Columbus. Neysa and I ate supper at the Sunrise Café, a housefly that had escaped from the cold visited our booth.

2015: Robins still peeping in the morning. Winter storm “Bella” sweeps across the Plains and Midwest.

2016: The Dayton Street beech is full rust gold, the Xenia Avenue ginkgoes are mostly down, the Zelcovas on the way out of town rich red brown. Lil’s maple, the backyard white mulberry and the Osage are at about half. Jeanie’s river birch keeps a delicate scattering of golden leaves. A new winter storm threatens the Northeast.

2017: Under the waning moon, the Thanksgiving week ahead is expected to be cold but not stormy. At Ellis Pond, the swamp chestnut oak, the shingle oak and the red oaks held their chocolate brown leaves. Vern Hogans’ English oak was still olive green and fully leafed, as was the sawtooth oak. The yellow poplar still kept its foliage, shriveled, and its calices spilled wispy seeds when I touched them. The weeping willow was bare, the cypresses about nine-tenths down. I saw farmers harvesting corn as I drove back from Beavercreek.

2018: North to Wisconsin: One large murmuration of starlings, four smaller flocks. Three hawks, three road kills. I take notes, thinking that these 500 miles might show no creatures at all in a few years, gone like the insects on the windshield.

2019: Lil’s tree still holds at about a fourth, foliage brown. Robins heard peeping near Stafford Street this morning, and a small flock chirping as they travelled through the high trees of the ash grove.

2020: A warm 61 degrees this afternoon. I took the netting from the koi pond, cleaned out the pump and washed the lower south windows. At sundown near the Glass Farm wetlands, the ghostly intermittent call of a tree frog. A dozen ducks on the water, occasional quacks.

As the last leaves of the year come down, seed catalogs arrive in my mailbox, and I plan for May under the Bedding Plant Moon. Usually, I order a few packages of geraniums, coleus and petunias, and I start them under grow lights close to the furnace, which happens to be in the attic.

If I keep the soil warm, moist and close enough to the fluorescent bulbs, the seeds germinate within a week or so and then develop steadily throughout the winter.

Although I enjoy the flowers that the plants produce in spring and summer, for me, the best part of sprouting seeds in winter is sitting next to them, feeling safe and disconnected from the snow and from the rest of my life.

There, the only sound is the low purr of the furnace fan. All around me and the plants and the soft lights, the space is dark and private. The smell of new earth thins the musty smell of the attic. I hide, shielded by a comforter that is part childhood, part angel.

It seems that my eyes and my longing itself search the magical glowing green of the sprouts for meaning. All their prophetic power rests in their two or four leaves, all of their potential compressed into the most delicate and vulnerable flesh.

Here there is no thought of maturity or harvest, no logical conclusion, no socially redeeming value, no death. I do not think about the eventual work of transplanting and mulching, conflicts with insects and weather and blights. Even the promise of beauty, color and fragrance is irrelevant. Only the coverlet of this time in this place with these creatures makes sense.

Thus times do shift; each thing his turn does hold;