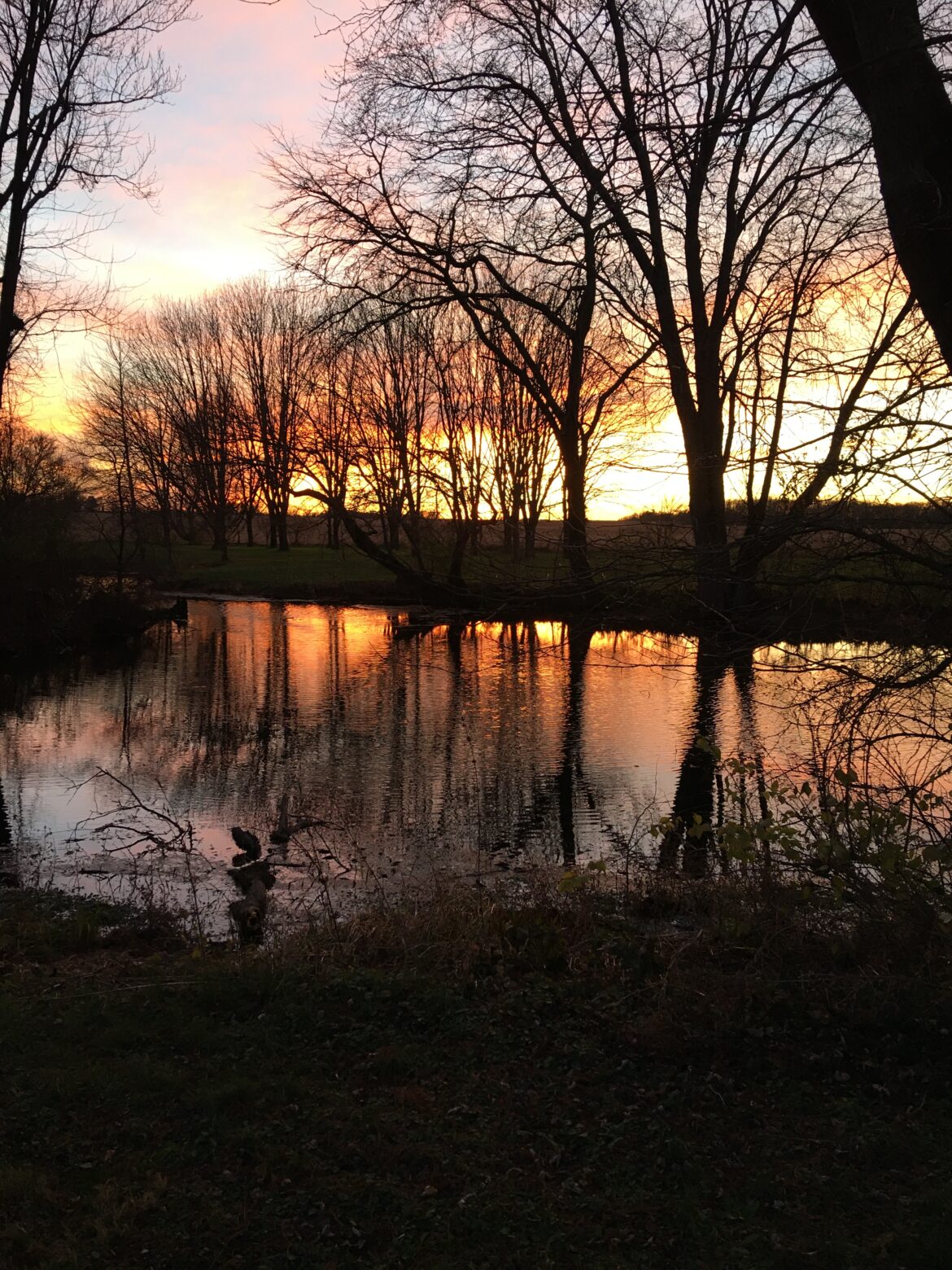 The last red leaf is whirl’d away,

The rooks are blown about the skies.

Even though this week is often one of the darkest and wettest of the Late Fall, milder autumns offer recollections as well as promises of spring.

Some years, garlic mustard has grown four or five inches tall, its leaves wide and bright. Chickweed has come back along the paths, and cress has revived in the pools and streams. Skunk cabbage has pushed up all over the swamp, some plants even opening a little. The low sun sets the new plants glowing like they glow in April.

Fed by honeysuckle berries and crab apples, robins linger in town and in the woods. Starlings cluck and whistle at sunrise, and cardinals and pileated woodpeckers and bobwhites sing off and on throughout the day.

1979: All the Osage leaves are finally down along King Street. All the forsythia, mock orange and honeysuckle are gone, too.

1984: South Glen: No skunk cabbage found so far. Mint, cress, dock, ragwort, garlic mustard, moneywort, sedum, ground ivy growing along the water. Hazy skies, temperatures in the 50s, it could be a day in March. A few oak leaves hang on, Norway maples hold some foliage. As I went toward High Prairie, I saw a deer running along the stream below, an arrow in its shoulder.

1986: Opossums still active at night, still being run over on Grinnell Road. Chubs bite, but no carp. The mild days are becoming more rare, skies darker.

1988: A cardinal sings at 11:56 a.m., then cardinals keep calling all day at home and in the woods, highs coming into the 60s, crickets chirping along the river, moths and flies common in the preserve.

1990: Purple deadnettle was blooming along the south wall, and a dandelion was open in the middle of the side lawn. A cardinal sang around 3:00.

1994: Starlings in the downtown trees this afternoon, the pears keeping most of their leaves in this warm and sunny autumn.

1999: Bradford pears are down to maybe half, yellowish-maroon in color. Starlings flocking in a tree on Davis and High Streets this afternoon. Osage leaves in the back yard hang on at maybe ten percent, all a heavy, vulnerable gold. One sweet gum tree a few blocks away has quite a few of its red leaves left.

2001: In Columbus, my white oaks are almost completely gone, and the small black grapes have fallen (or been eaten) from around my window. Along the freeway, honeysuckle leaves are more than half shed. At Washington Court House, the pear trees are at least two-thirds down.

2007: The downtown pear leaves are red and about half fallen. All of the front honeysuckle leaves are down, and the forsythia has been hurt by the hard freezes of the past two nights. In the south window of the bedroom, one Asian ladybeetle looks for a crevice in which to spend the winter. I saw one last week, too.

2008: Sudden increase in the falling of bittersweet hulls to the sidewalk.

2009: To Madison, Wisconsin in the rain, the landscape wet and fresh instead of frozen and hard the way I imagined it would be on this Thanksgiving drive. Before we left home, I noticed that the Osage tree had started to shed overnight.

2010: Steady rain through the night, the Osage tree in the back yard shedding hard, almost all the leaves gone.

2011: Returning from Wisconsin: One hawk, four large flocks of starlings and blackbirds, and two migrating flocks of gulls feeding in soybean fields. Honeysuckle leaves were absent until near Indianapolis. Dandelions blooming at an Illinois rest stop.

2014: In the yard trees: a large flock of starlings, mixed with what appeared to be some robins and grackles, at about 9:00 this morning.

2016: I noticed that all the honeysuckle berries were down now, just as the leaf fall from the bushes intensified.

2017: Madison, Wisconsin to Yellow Springs: sun, steady wind, mild in the 50s throughout the Midwest. One large hawk, one large flock of what appeared to be cranes, one large murmuration of starlings, sightings of wildlife diminished compared to years past. Two insects killed on the car windshield during the trip. Throughout the countryside, oaks are keeping their leaves and creating a dense cover wherever those trees are dominant.

“I saw a pod of about twenty, probably an extended family group, at about a thousand feet, flying from west to east, just south of my property.  Ran screaming to the house for Jane to come out.  When I cam back outside, they were calling and tracking on the same path, but from east to west.  Getting their bearings I guess.   Earliest sighting for me.  I’m guessing they were bugging out in advance of what The Weather Channel is calling Winter Storm Bruce coming at us through the Plains.”

Emily emailed a little later: “I was pleased and overjoyed to hear a flock of 20 bugling big birds, way high in the sky. As I was breathing and relaxing in my sit spot, there they were, kettling in the north, making their way over YS and toward the SW. By the flash of white and black on the wings, I guessed that maybe they were Tundra Swans.”

2019: Lil’s maple, my Osage and Rachel’s silver maple are scraggly. The oaks are brown and dull. Before sunrise: robins peeping, a cardinal call far off.

Stood amazed at the quiet, the bright sun, the spring-like light. The sharp outline of the pasture. Knolls, the brightness of bare trees in the hopeful sun.