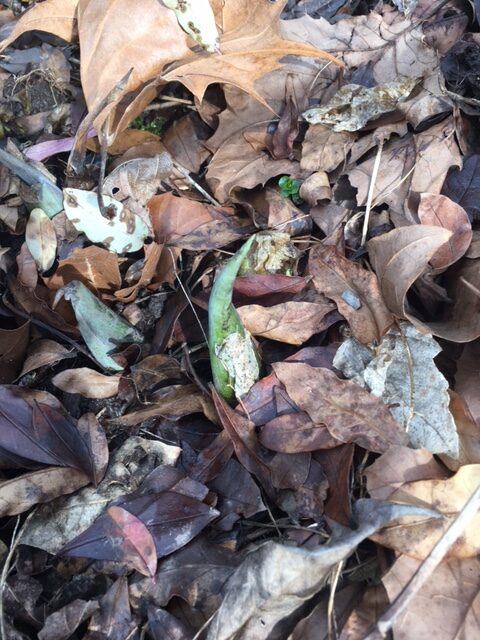 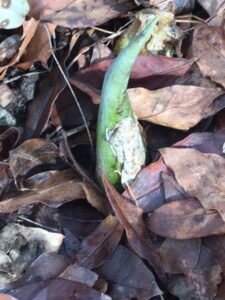 They will come again, the leaf and the flower, to arise

From squalor of rottenness into the old splendour,

And magical scents to a wondering memory bring;

The same glory, to shine upon different eyes.

Earth cares for her own ruins, naught for ours.

Nothing is certain, only the certain spring.

Today is a usually a chilly day, with a 70 percent chance of freezing morning temperatures. Precipitation comes four years in ten, half the time as rain, the other half as snow. Highs are in the 60s or 70s just five percent of the time, in the 50s ten percent, in the 40s forty-five percent, in the 30s thirty percent, the 20s ten percent. Skies are completely overcast 40 percent of the years. Low temperatures in southwestern Ohio can fall below zero between this date and March 20th.

​The inventory of middle autumn at the end of October is rich in foliage and color, but the settling in of late autumn in November draws down the density and texture of the canopy and strips away almost all the floral barriers to winter. As spring overcomes February and March with an accumulation of new growth, fall spreads across the summer with an accumulation of loss.

​        One enumeration of late fall is the counting of what no longer holds, a counting of emptiness, cued only by memory and the more durable, woody scaffolding that binds the seasons:

1982: The garden is ready for spring, the weeds all pulled, vines and stalks thrown on the compost, asparagus cut back, manure and shredded leaves dug under, pathways set, the earth smoothed over. The summer’s garlic, planted in October, is half a foot tall. Spinach is sown for March. Worms have come to work the topsoil, sparrows clean the last seeds and the grass snakes are sleeping in the stone wall. Parsley and thyme are mulched deep with straw.

1988: Paperwhites are nine inches tall today: they started at two inches on the 22nd. The amaryllis, begun on the 13th, has grown 13 inches. Winter sundogs seen in the late afternoon sky.

1991: On the way from St. Louis home: long flocks of blackbirds near the Mississippi.

1992: House finches (four of them at the thistle seed this morning).

1993: First junco seen at the feeder today, and the first wren since early in the summer.

1995: Cardinal singing at 8:00 this morning, and again fifteen minutes later. At the triangle park, the tips of the spruce branches have more new needles now, quite a bit of progress since I first noticed growth in October. At the corner of Limestone and High Streets, bittersweet continues to fall to the sidewalk. Along Dayton Street, the yellow witch hazel flowers are shriveling.

2000: Thunder with flurries this morning, a flicker of spring or remnant of summer, just as the landscape settles down to December and January stasis.

2001: Pear leaves are red and gold downtown, thinned to maybe just a fourth of their summer number.

2004: Around the yard, some Osage and mock orange still hang on, but the lilacs are finally down. Parsley is still bright under the old apple tree, and lavender is still blooming in the garden over on the corner. I saw a few purple asters blooming around town yesterday. The soil thermometer near the pond says 43 degrees, its lowest reading of the fall.

2005: Robins still calling and flying around the Stafford Street alley before sunrise. One robin even gave a long singsong call a few days ago, maybe on the 25th.

2007: No robins seen or heard for almost a month. About fifty or more starlings in Don’s trees this morning, the most I’ve seen there. Some of the pear trees downtown are bare, some about three-fourths fallen. Two orange woolly bear caterpillars found in the flowerpots outside yesterday; I put them in the hollow of the old apple tree stump. Paperwhites planted today.

2009: First day home after returning from Madison. The Osage tree has shed much more, but still keeps maybe a fourth of its leaves. The coneflowers in the alley hold on, unfazed by the date. Starlings whistle in the Stafford Street trees. Jonatha, just back from Japan, said the ginkgoes there two weeks ago were golden but had not started to fall, about a week or so behind the ones in Yellow Springs.

2011: The first snow of the year late this afternoon, the ground white for a few hours before the wet grass soaked it up. More worms stranded from the earlier rain.

2012: Continued cool and sunny. Background whistling from starlings in the neighborhood. In the Stafford/Phillips Street alley, bittersweet hulls have fallen, orange berries decking the honeysuckle trellis.

2014: Returning to Yellow Springs from Wisconsin in bright sun, snow all across the landscape, I saw maybe five miles of waves of sandhill cranes flying fairly low across the Illinois fields about a hundred miles south of Madison. Later, two flocks of gulls far off on farm ponds. No large flocks of starlings, no hawks seen.

2015: Returning from Wisconsin: only two hawks seen, no starlings, no gulls, no cranes.

2016: Light breeze and mild in the low 60s: Lil’s and Peggy’s burning bush foliage collapsed during the night rain. Robin peeping in the yard around noon. The seeds from small white asters disappear. The yellow ochre leaves of the New England asters have started to fall. This afternoon, I stacked some wood and worked in the garden taking out aster stalks.

2017: Another day of sun and mild temperatures. The post office pears and Zelcovas are about down, but Peggy’s and many others are still gold and bright. Lil’s maple has just a few leaves left, and the Dayton Street beech is down to about a fourth.

2019: All around the yard, the honeysuckle leaves have fallen. John Blakelock reports a small flock of meadow larks flying south, seeming to play and chase each other as they travelled.

2020: Barometer dropping in advance of tomorrow’s full moon storm, sun and mild 50s. At the Covered Bridge, four turkey vultures circling so high. In the muck near the stream, slim skunk cabbage has appeared, six inches at the tallest. Throughout the woods, chickweed spreading. Beyond the woods, the pasture is bright green in today’s sun. The river is late-November high, deeper than I’ve seen it this fall. In the back yard, the Osage tree has lost most of its leaves, only a couple of branches holding yellow green.

Like the Zen of absences and the Zen of spaces between sounds, the Zen of unconnected events, of events out of apparent context, creates an emptiness that is both expectant and complete.