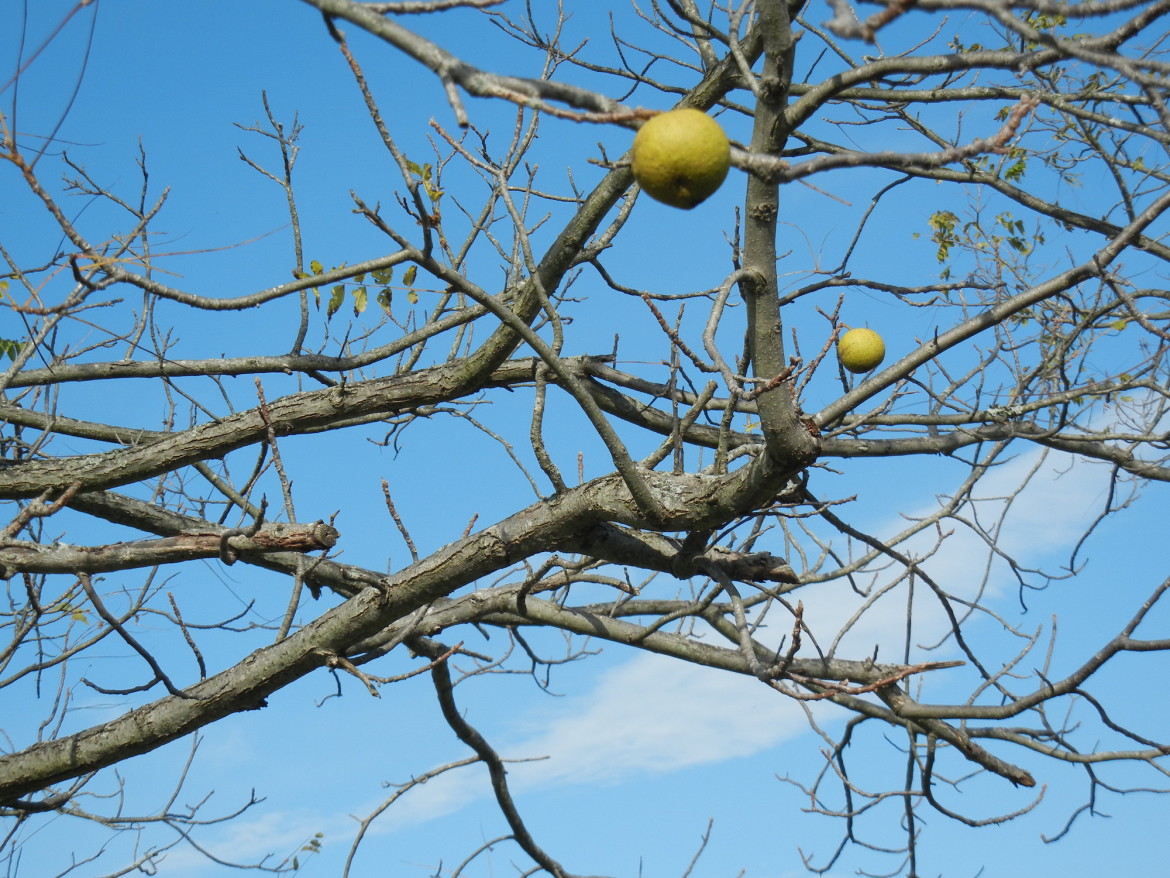 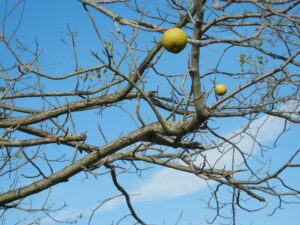 And the frosts is comin’ on

The week just past and the week to come are among the most dramatic of the year along the 40th Parallel. Thirty days ago, the woods were green. Fifteen days ago, the ashes and the locusts were at their peak; today, most of them are gone or ready to come down. The maples and the sweet gums dominate the village now. The deciduous year is almost over; the storms that bring Late Fall will finish it.

1988: Sycamores all gold along Corey Street, but most sycamore leaves are gone at South Glen.

1990: Leaves past their peak now, but still strong. Primroses, planted in the early spring, are blooming, one red, one yellow, one blue. A cardinal sang off and on while I cleaned up the garden this morning, and geese flew over. After three frosts, the last tomatoes and zucchini gathered. Robins migrating through the yard today.

1992: The first tier of maples has fallen, the second level is full color now, maybe half the trees are bare, half full color. No birds heard today.

1995: At the Mill, robins flocking yesterday afternoon and now this morning, too, steady chirping and fluttering. Near sundown yesterday as I was coming back from the dam, about three dozen buzzards suddenly appeared over the river bend, reminiscent of the way I saw them a decade ago.

1998: Asian ladybugs reported at the schools now, increasing in numbers as the week progresses. And a call from Clifton a few days ago about an invasion there. In the garden, I dug up two chard plants and brought them to the greenhouse for a winter experiment.

1999: The pond is cluttered with leaves. A new frog seems to have come to live there. I haven’t seen him, but he dives whenever I approach, unlike the summer frog that sat and watched me from under a rock. Late afternoon: Lil’s maple has been turning all day, now is deep golden brown; two days ago it was almost fully green. Mrs. Lawson’s far maple matches the color of Lil’s.

2000: Cabbage butterfly and small gold skipper seen. In the village, the late locusts are down, ginkgoes starting to shed, pink quince three-fourths bare, some sweet gum trees are three-fourths, catalpas seven-eighths shed. Out in the countryside, the tree line is brown and empty except for scattered bright Osage and maples. In the south garden, late mums, a handful of gaura, spiderworts, two daisies left. Along the stone wall, the yellow roses are the most beautiful they’ve been all year. In the greenhouse, several Christmas cacti are blooming.

2001: Casey called this afternoon: A giant flock of herring gulls was feeding in a soybean field north of town. The soybeans, he said, had just been harvested, and he’d never seen so many gulls. My books say they are migrating now towards the Ohio and Mississippi valleys; Casey found them.

2002: Full color of the first and second tier of leaves blossoming together. Cottonwoods mostly down. Hostas are yellowing.

2005: The Danielson’s tree is all pale gold and losing leaves. Lil’s maple is still mostly green; her burning bush is deep red. The red-orange maple toward Limestone Street is shedding but still vibrant. Mrs. Timberlake’s maple is blanching a little, but remains in Early Fall. In the alley behind Mateo’s house, chicory was opening at 7:45 this morning. Christmas cacti brought in from the back yard, many of the plants budding. On the road to Wilmington, the woodlots are still in full color, but shedding continues to increase.

2007: Robins chirping and whinnying, starlings chattering in the alley this morning, some starlings in the alley pine tree. The alley maple is shedding hard now. Mexican sunflowers cut back today; they are still blooming, but the stalks have collapsed. To Columbus and back this afternoon, the cottonwoods and many ashes down, but many ashes holding, and peak maple and sweet gum color throughout. Across the street, Lil’s maple and Mrs. Timberlake’s maple are still green, the Danielson’s more than half turned. The ash tree between the Lawson’s and the corner is pale yellow and holds all its leaves. Some burning bush in the area is full red; Lil’s favors the southern exposure.

2008: After a blustery night, the back yard shows hundreds of white mulberry leaves down, leaves that belonged to branches damaged in the passage of Hurricane Ike in September. In the alley, all but three of the apples have fallen from the ancient apple tree – the last remnant of an orchard that filled this part of town three-quarters of a century ago. The orange of the Danielsons’ maple deepens, becomes more transparent, stronger. The McDaniels’ maple is still yellow green, half back into summer.

2010: Lil’s maple full gold, her burning bush full red. The Danielsons’ maple is about down, Mrs. Timberlake’s full yellow and shedding, the star magnolia next door to her has dropped all its leaves. Many silver maples around town are still green, many turning palomino gold, some red maples full red. Quickweed, roses, deadnettle, smartweed blooming strong. The pale gold of the grape leaves outline the honeysuckle bushes. One dark maroon and black woolly bear caterpillar climbing up the front steps this afternoon when I was raking leaves.

2012: A reader sent me the following: “Is it just me (I reside in Clark County, OH) or are there fewer, if any, wooly worms this year? I haven’t personally seen a single one and have asked many friends and relatives who have said, ‘Come to think of it, I haven’t either.’ Is it a result of the dry summer, will there be no moths/butterflies next year? They have been used to predict the coming winter’s intensity in years past, if so what could this indicate? “

2013: The Danielsons’ maple is almost bare, as is Carl’s middle maple, and Mrs. Timberlake’s has started to turn near the bottom. (But a handful of her feverfew blossoms have survived in the alley.) Lil’s is holding out, still quite green. Quince shedding is accelerating just a little, the pond netting catching more leaves. At the Cascades, no goldenrod or asters seen, only one robin heard, the staccato rattle of a cricket, the canopy half down.

2014: Leafdrop accelerating leaves thick now on the sidewalks and yards. The star magnolia’s foliage is almost all gone. Carl’s maples are bare. Lil’s continues to hold but thinning. At 7:50 this morning, a medium-sized flock of grackles passed over the alley heading southeast.

In the neighborhood, robins still here, chirping in the lower trees. This afternoon, the very first Christmas cactus flower opened, a white and pink one. On Xenia Avenue, the bright golden ginkgo is starting to shed. Near John Bryant Park, Bob Huston reported seeing two fireflies blinking above the soybean field by his house. And Brad Roof found a snapping turtle emerging from its egg.

2015: Before daylight, I stood in the back yard and listened to the steady trill of a tree cricket. Later, Ed Oxley called to tell me he had found (and photographed) two toads yesterday as he was clearing brush from around his yard. That makes October 26th the latest toad sighting so far! Lil’s Norway maple is now full and deep yellow-orange, its darkest and richest coloring in years. Maples are shedding quickly now, more with each rain, and the secret maple is completely down.

2016: Jeff from Springfield sent a note saying he had always called the fat, round fruits of the Osage orange “hedge apples.” “My grandfather was half Native American, and he used the hedge apples as an insect repellent, mainly for the concentrations of ‘lady bugs’ that accumulate in the fall when the weather turns. I did not see any real change in the numbers.”

This morning, Moya’s maple and Mrs. Timberlake’s are three-fourths down, Lil’s burning bush about full red.

2017: Portland, Oregon: I arrived at the height of leafturn and the second or third day of leaf fall (according to my grandkids, Max and Jack). Throughout the area, Zelcovas and ashes and maples – especially red maples – are full gold and orange and red and falling quickly, and poplars elegant yellow gold, thinning. The color is more dramatic here in suburban Portland two thousand miles from Yellow Springs, but it seems that the stage of breakdown is quite similar.

2019: Notes from Amsterdam, Holland: Sightings of ginkgoes at the same stage as in Yellow Springs, the whole golden sphere, and walking in the park with Gracie, Michaels black poodle, finding old friends (plants), encountering home in spite of myself, the familiar burdock,  rudbeckia, mouse-eared chickweed, horseweed (everywhere horseweed, surprisingly familiar here on the vast Netherlands delta overlooking one canal after another in the cool wind), and so I am simply home or home is not being alone or less being alone than not being totally alien or out of place, ex-patriotic and then running into Ana and having a conversation in Spanish, and I was surprised at my facility.

And in all of that I felt at home not that I had felt so un at home before, but simply that things fell into place as I stood by the canal and the dog ate grass and it came time for me to go back,

And then another encounter in the same story:

How to relate…. Perhaps as

An incident in Amsterdam-Yellow Springs

I was walking the dog of a friend in Amsterdam. It was my first time there, and it was Sunday afternoon, and cloudy and cool and breezy, and we had just come back from the North Sea where the wind had been wild and hard that morning, and the dogs had played fiercely in the waves.

So with everyone else doing something else later in the afternoon, I was asked to walk Gracie, a labra-doodle that looked like a smaller standard poodle, black and curly-haired.  Gracie seemed disoriented to be going out with me but gradually seemed to come to accept me in a kind of absent-minded or lost or confused way, perhaps like I was feeling in a strange country.

Gracie eventually ended up eating grass, like an indoor dog will do, and I stood by the black canal and noticed the Yellow Springs plants that still were blooming now at the end of October among fallen sycamore leaves: burdock, horseweed, quickweed, chickweed, the tiny English daisies with their fat small broad leaves, the dried nettle and the sharp burrs of the burdock, and creeping Charley, and on a puff of wind, a honeybee, the only insect I had seen since my arrival, approached my right hand and then came up and hovered for a moment close to my face then flew away.

Later as Gracie and I were leaving the park, a woman so beautiful and tall and old, with blonde-gray hair past her shoulders, blue eyes lonely, with her two small brown terriers approached me, said something I did not understand, and then she so casually deliberately let the leash of one of the dogs fall to the ground in front of me.

2020: A chilly, gray, autumn day, but this afternoon, in the cut-over soybean field across from Ellis Pond, a flock of at least a hundred geese was feeding, fattening for winter fellowship and spring pairing.

Spatial units are stagnant and there is no “stuff” between the units or frames. The weaving together of these frames occurs in the mind…. In quantum mechanics, “position” is like a strobe snapshot. Momentum is the life-created summation of many frames.