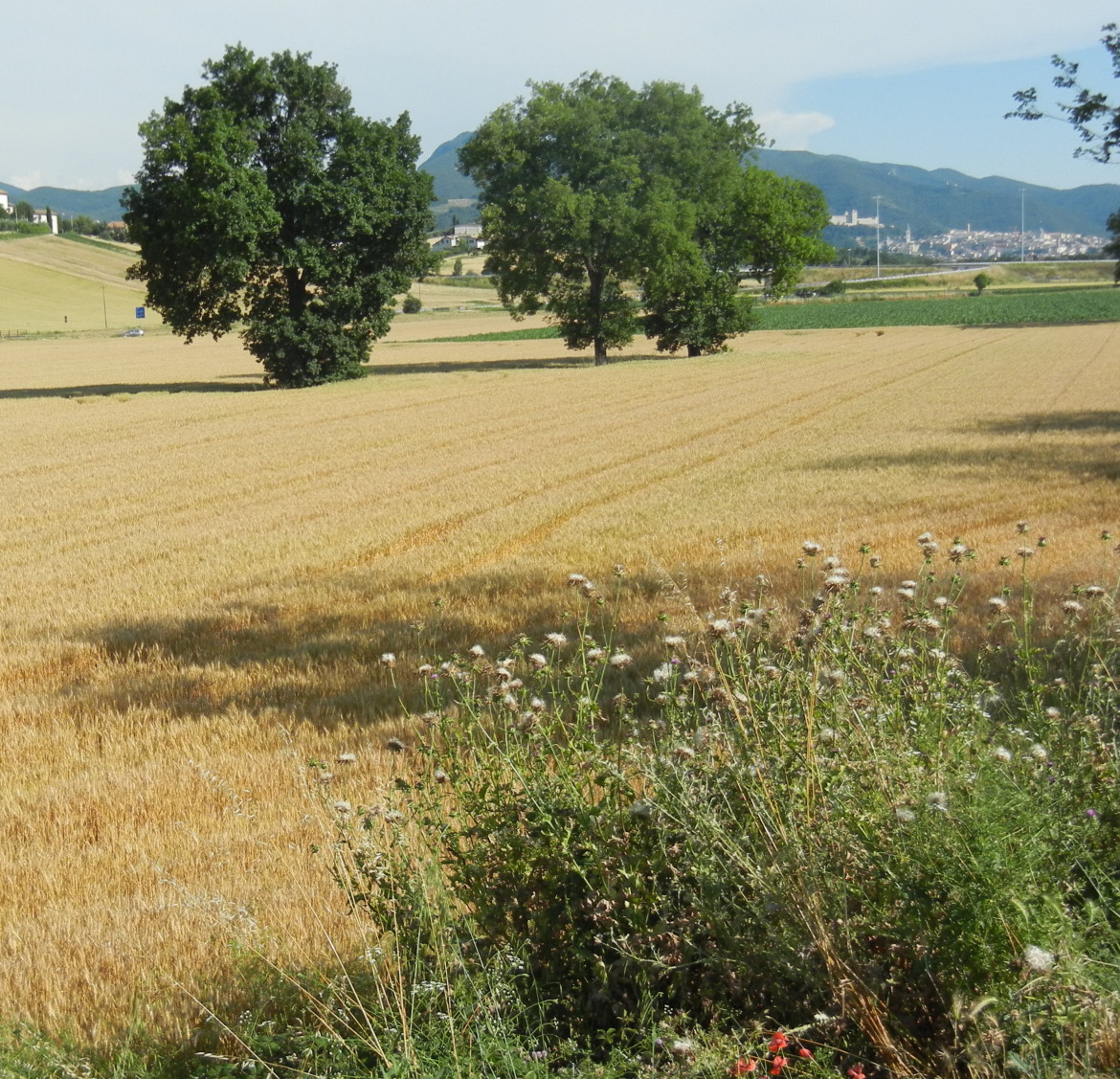 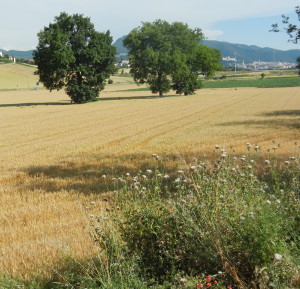 Out of the matted roots of the turf and from the gray soil beneath, innumerable forms of life resembling those that have vanished will spring to light – creatures of a thousand beautiful shapes, lit by brilliant color, intense in their little lives, forever moving in a passionate, swift, fantastic dance. And we shall see it all again, and in seeing renew the old familiar pleasure.

Today is the last day of the year on which there is a ten percent chance of a high in the 80s. From now on, temperatures remain below that mark at least until the first week of April. Highs come into the 70s fifteen percent of the days, into the 60s twenty-five percent, into the 50s forty-five percent, and into the 40s five percent. Chances of rain are 40 percent; overcast conditions occur four to five days in a decade. Frost strikes one morning in five.

Highs are usually in the 50s or 60s, with the odds for 70s near one in five. The danger of frost remains similar to that of the third week in October; about one night in three receives temperatures in the upper 20s or lower 30s. But by this late in the season, the chances of a hard freeze have risen past 50 percent, and the odds get better each night for killing lows.

This week is generally a brighter one than last week. Chances of sun are about 70 percent throughout the period, and some of the driest October days are the 26th, 28th, and 29th (each having just a fifteen percent chance of precipitation).

The sixth high-pressure system of the month usually arrives near Halloween. If it is approaching on the 31st, that evening will be warm, with maybe a little rain. If the front arrives on the 29th or 30th, the eve of All Saints Day is usually unpleasant.

1983: Mill habitat: Robins past the mill, this time on the ground and quiet until I walked through. Twenty buzzards counted on the roost at the bend of the river. Parsnips in bloom, yarrow and winter cress growing back. Thin and broad-leaved zigzag goldenrod still blooming. At home, a violet in the grass. Along the north hedge, peach leaves green but falling.

1984: Mill habitat: Robins found about 200 yards beyond the river bend, buzzards also in a different sycamore, large flocks swarming before heading south. In the rain, the grass was yellow green, the woods like it seemed in April, red leaves like new flowers, and the faded elms glowing like the fresh leaves of spring. In town, the maples are in full decline, yellow poplars and redbuds all gone.

1990: Through the countryside, colors are intensifying, coming to a head about a week later than last year. Lil’s maple about a fourth turned. Mrs. Lawson’s is deep and fragile, as are mine. A Canadian thistle seen blooming at Wilberforce. A sundrop primrose flowering along Grinnell Road.

1993: Dozens of black woolly-bear caterpillars crossing Grinnell and Route 68 today, the only day in the year they’ve been so restless.

1994: A monarch butterfly came to the zinnias today, the last of the year?

1995: Coming back to Yellow Springs from Chicago, I can see little change in the leafturn. Along the freeways in northern Illinois, goldenrod is still in bloom, sunflowers still open. But here at home, almost everything is gone.

1999: The south hedge suddenly rusts and sheds quickly, my privacy dropping away all at once.

2000: Crows at 6:34 a.m., clear, quite dark. In the garden, the last veronica and phlox die back, gaura still in bloom. On the road to Hillsboro, I found the peak of leaf color to be well past. At home, the Danielsons’ maple was three-fourths down, but Lil’s was still at its best. The south hedge around the house is slowly collapsing, revealing the neighbors.

2001: The red Christmas cactus is about a third open.

2002: A large flock of grackles in the back trees for several hours in the late morning.

2003: The landscape is dull on the way to Wilmington, even though so many of the maples and oaks still hold most of their foliage.

2004: A cardinal was singing when I walked out the front door this morning at 6:35. The Danielsons’ maple is deep orange gold, aging but still holding. Lil’s tree is a rich new gold. At South Glen, 8:00 a.m., small cups of gossamer, shining with dew, hang to the tips of the black wingstem, are common throughout the cut field grass. Robins are passing south along the east ridge. Osage leaves are bright yellow (fat green fruit all over the ground); sycamore leaves are rust-brown-gold. In one dark patch of wingstem stalks, a few pale blue tall bellflowers are blooming. In one corner of the pasture, wild lettuce plants, leaves shriveled, display dozens of prominent white seed heads, each maybe an inch and a half in diameter. When I touch the heads, they dissolved between my fingers. This afternoon, I planted late-spring tulips in the northeast garden around the hydrangea.

2007: Venus shining huge in the deep blue, predawn east. A cardinal sang at 6:35 as I walked Bella in the alley. As Jeanie and I drove to Dayton about 6:50 this morning, we saw a long flock of blackbirds high above the freeway. The flock began at the northern horizon and continued across the clear sky into the southern horizon.

2010: First light frost of the year this morning, frost on the windshield of the cars and all across the lawn. The elephant ears and the impatiens, though, were not hurt. When I was swimming in Xenia at about 8:00, I looked out to see a long flock of blackbirds maybe half a mile away, and they continued to pass over the buildings in my line of sight as I swam along, a huge flock! The secret maple and the northeast maple are just about all down; the Danielsons’ maple deep orange, half shed; Lil’s maple maybe a third turned; serviceberry trees are holding; the north viburnum is down to about a tenth of its leaves. One ginkgo on the south end of time is full gold-green, while most of the others have barely started to change.

2011: Light frost this morning, identical to last year’s frost on this date. When I walked with Bella in the alley and along Stafford Street, robins were whinnying and peeping all along the way. On the High Street sidewalk, many more green Osage fruits had fallen in yesterday’s rain. Stacking wood this afternoon, Jeanie and I saw at least three monarchs, a buckeye and a painted lady (Cynthia). Jeanie heard one or two crickets before supper, but on my walk tonight, the neighborhood was silent.

2012: To the hills of the Red River Gorge in Kentucky, 200 miles southeast of Yellow Springs, the land in late full color throughout the drive, many hillsides really strong, others quite thin. The oaks are red and brown now, and many maples still bright orange and gold. In the woods, zigzags have gone to seed, only a few white asters in bloom. Giant pawpaw leaves had just fallen recently, probably burned from the frosts of last week. Ghostly trilling of a cricket behind the motel tonight, like the one I heard at home walking Bella last night.

2013: The first light frost in town this morning, cold front moving in briskly, gibbous moon in the clear west. On Limestone Street, starlings cackle high up in the black walnut trees, almost indistinguishable from the walnuts themselves. Down Stafford Street, robins talking migration. Coming home from Wilmington today, I could see that the peak had just passed, the ashes and cottonwoods empty, leaving the more common maples and sycamores and tulip trees to stand almost alone. At Ellis Pond this afternoon, the sugar maples had deepened a little more, and the bald cypress close to the west end of the pond had turned rusty brown, other tinges of color on several others. The bur oak and the red oak were starting to show yellow along the edges of their leaves, and the tulip trees had more gold, tattered. When I got home, I noticed that the remaining zinnias had all lost their brilliance from the frost. The remaining butterfly bush flowers were brown. The roses were the only plants in bloom.

2014: More and more maples coming down in the neighborhood. And orange berries on euonymus shrub on the corner of Phillips and Limestone Streets have started to emerge from their white hulls. At the Ellis Pond arboretum: Sweet Hart chestnuts yellow green, half down; ginkgo turning (and they are fully turned in town, glowing); sycamores gold and weathered-green; sweet gums streaked with red and gold and purple and green; Zelcovas turning at various stages, some rich, chocolate rust; hickory deep deep gold; pawpaw and lindens both shedding now, foliage yellow-gold tinged with violet; some dogwoods with sagging red-purple leaves, some dogwoods with just a few leaves left; weeping cherry yellow-green, three-fourths down; beech dark black-green, holding near full; wild plum, Katsura tree, Maackia trees bare; the maple grove orange-brown and half fallen.

2015: Sun and high clouds, temperature in the upper 70s. Crows at 6:33 this morning, the sharp call notes of a cardinal at 6:38. The hackberry tree at the south edge of the yard has lost most of its leaves; the north hackberry is still thick and palomino gold. In Clifton Gorge and Bryon Park, the hillsides were still at late peak color, but leaf drop had gouged huge holes in the canopy. The only flowers were a few violet asters, Aster spectabilis. One painted lady butterfly, several Asian lady beetles seen. Only crows, one pileated and one cricket heard my whole five-mile walk. This afternoon, the koi relished their food in the warm sun. Lean reported a small toad hopping along her living room rug! Tonight, soft and mild, a few crickets: several raspy field crickets and one higher-frequency trilling cricket.

2016: A blustery day after the passage of a cold front. The north yard is full of hackberry leaves pulled down by the wind and rain, the tallest castor bean plants fallen over, the zinnias leaning closer to the ground, the garden so tattered, ready to be cut away. Into south central Ohio: the land was at early-full leafturn, subdued by the scarcity of sunlight, but the sky was fast with chopped white and gray cumulus clouds opening off and on throughout the morning into pools of blue-green. At Conkle’s Hollow, the trees still held. Once in a while, a violet arrowhead aster still bloomed. In the afternoon, the clouds overcame the blue, turned to banks of stratus, increasing and chilling the wind.

2017: Jill’s vincas brought to the greenhouse this morning. We prepare for the frost forecast for a week from how. Behind my new red vincas, the first red-orange Christmas cactus flower has come open. In the zinnia garden: two monarchs, a bright yellow sulphur and at least one painted lady at 9:00 a.m. Honeybees still work the hummingbird feeder.

2019: Mild and calm in the morning, then brisk wind and chilling through the day, two monarchs in the zinnias, despite the fair-weather cumulus clouds that kept cutting off the sun. Robin heard in the front yard. Two relatively large flocks of geese near Ellis.

2020: A day of sun and warmth in the 70s: I dug all the remaining canna lily beds, made up two more pots of plants to bring inside and two large bags of roots to start in February or March. One or two cabbage whites and one large bright yellow sulphur in the remaining zinnias. At Ellis, a gathering of starlings in the English elms. Raked leaves at Jill’s, the sugar maples almost all the way down, the silver maples thinning there. Lil’s maple gilding quickly now.

The landscape contains a thousand dials which indicate the natural divisions of time….