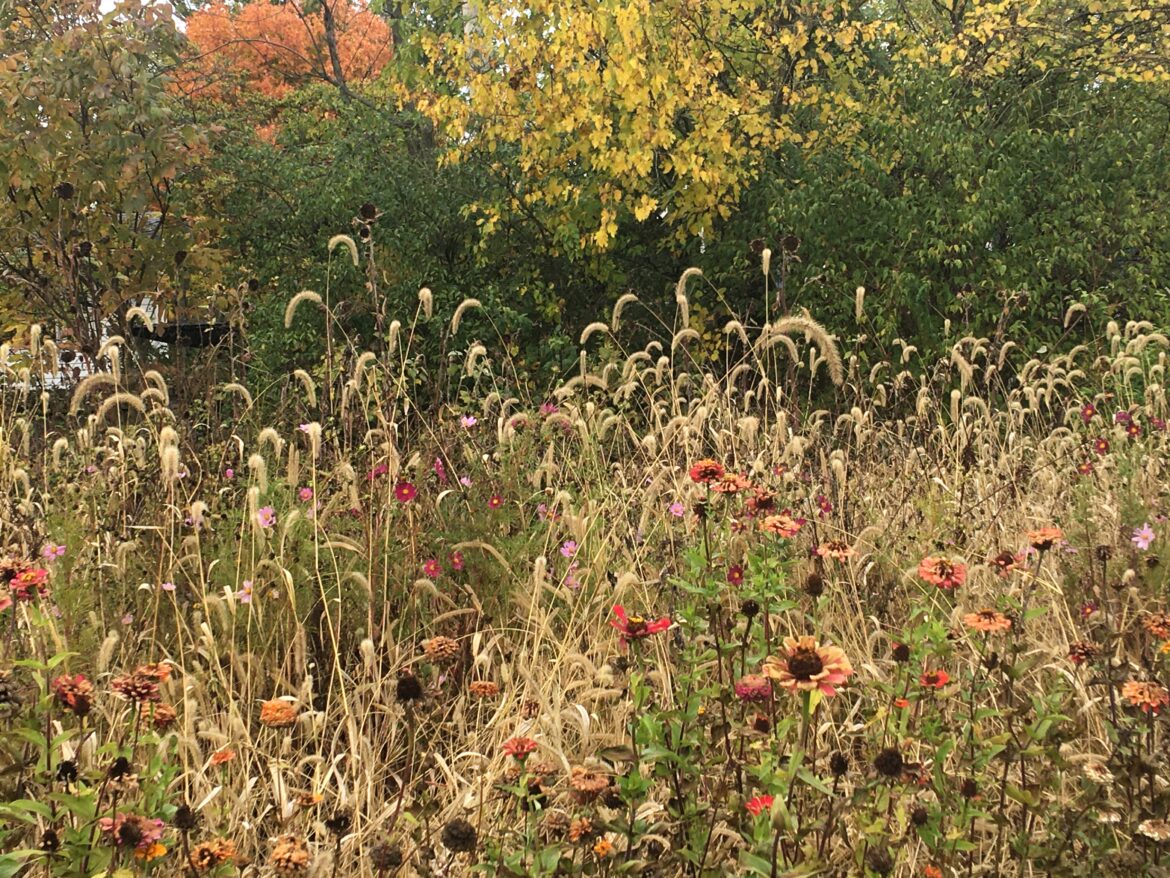 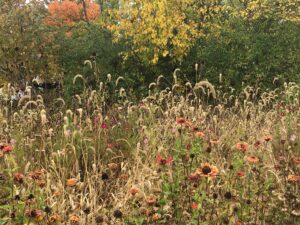 Once you have uncovered a portion of the year’s cycle, you can see the past and tell the future. Every day becomes one day. Stasis and passage become inseparable.

The period between October 28th and November 1st is typically the best time remaining in the year for late harvest and outdoor activities. The Sun shines more often during this period than on any time for the rest of the year. October 28th is usually the driest of all those days, with the chance of rain dropping to only 15 percent. Skies are clear to partly cloudy 75 percent of the time. Temperature distribution is almost identical to that of yesterday: 25 percent chance of 70s, fifteen percent for 60s, fifty percent for 50s, ten percent for 30s. Chances of frost fall slightly to 30 percent.

Cabbage worms still eat the cabbages and kale, but the seasons of tomatoes, beans, eggplant, and squash are usually over as October ends. Some years, houseflies still get in the back door. The last crickets sing in the milder afternoons and nights. A few cabbage butterflies still hunt for flowers. Grasshoppers and woolly-bear caterpillars are still common. Small moths play in the woods. Asian lady beetles seek winter refuge in crevices of house siding.

1984: To Maryland: Most leaves gone along the Pennsylvania Turnpike, but Washington D.C. and much of southern Maryland seem near late peak of color. Sundrops, Queen Anne’s lace, occasional crown vetch, daisies, a few asters, a few rape plants, two or three white moth mulleins, some helianthus still in bloom there. All goldenrod gone, but the South clearly has more leaves and later wildflowers. Buzzards seen in the mountains and near the coast.

1985: Robin migration seems to be done. Only occasional peeps heard.

1988: On the other side of leafturn and leaf fall: fragments of foliage, the patterns of the bare branches isolated without the confusion and the monotony of summer green or the dramatic power of Middle Fall’s color.

1993: To North Carolina: East at dawn, the Sun, huge and orange through the violet cirrus on the horizon, gives a russet glow to the trees. The autumn reds shine. Through the Ohio piedmont outside of Chillicothe, fields of gray goldenrod, the hills’ rust and browns of Late Fall, remaining sycamores pale green, leaves edged with decay. Smell of wood smoke here and there. Past Portsmouth along the Ohio River, some hills of oaks are gold and orange, autumn completely intact a hundred and fifty miles southeast of Yellow Springs. Sumac leaves appear on about a third of their branches, bare trees become less common.

At Charleston, West Virginia, the yellow catalpas, yellow poplars, cottonwoods, and maple oranges become more prominent, setting off and showing off the other colors. I can see that the first step to Late Fall is the disintegration of the brighter leaves.

South toward Beckley, more pines appear, tempering the losses, the blush of maroon and rich yellow ashes comes in at about 180 miles from Yellow Springs. The yellow poplars have all their leaves by now, hickories here too, the sugar gums are full again, their star-shaped leaves red orange.

At 200 miles, the red sumacs have about three fourths of their leaves. Then within just a few minutes, Late Fall returns, hills with different plantings appearing dark and past their prime, then back again to Middle Fall for an hour or two. Then approaching North Carolina, I come into early Middle Fall, with far more green trees, and many of the cottonwoods and poplars still strong, no hint of the fragile status of the season two hundred miles north.

A few clumps of violet asters grew from the cliffs in central West Virginia. Thirty miles north of Beckley, one primrose stood by itself in a narrow segment of soil between the two sides of the freeway. Milkweed pods were open and disheveled all the way from Yellow Springs to Winston-Salem. Once in a while, a goldenrod plant had its September Ohio color.

I called home and talked with Jeanie tonight. She said Uncle Bill had just phoned from northern Minnesota in the middle of the first heavy snowstorm of the season.

1994: At South Glen, nothing in bloom except new, blue tall bellflowers growing in the axils of their long, tattered stems.

1998: Now deterioration speeds up, the fullness of a week ago suddenly collapses in the morning rain. The unity and the cohesiveness of the summer and Middle Fall disappear.

1999: To Xenia: Sweet gum trees red, the silver maples turning palomino-champagne gold, ginkgoes olive green, oaks brown and red and rust. This is the last phase of the peak.

2001: Cardinal sang at 6:45 this morning. Small flock of goldfinches with gray winter breasts seen in the redbud tree this afternoon.

2002: Flock of blackbirds flew over at 8:23 a.m. One jade tree budded in the greenhouse. To Wilmington: the cottonwoods are down, but many maples and oaks keep their full middle autumn color. One golden birch almost bare. Woolly-bear caterpillars are common on the road again.

2003: Lil’s maple half gone, the Danielson’s all down except for a few hundred leaves.

2004: Lil’s maple is half gone. Mrs. Timberlake’s is maybe three-fourths fallen. In the yard and out at Duckwall’s at the edge of the Glen, robins are chirping and calling, moving south. The Danielsons’ tree is down. No woolly-bear caterpillars seen through the entire autumn.

2005: One purple clematis flower opened yesterday or today in the sun. One yellow rose cut for the kitchen table. Pink roses continue to bloom in the northwest garden. The secret maple is suddenly full gold. Danielsons’ maple full, Lil’s only about a third turned. The leaves remain mostly green on the Korean lilac. A freeze last night killed most of the elephant ears, impatiens and zinnias. Much of the basil survived.

At South Glen, a few scattered aster flowers remain, but little else. The foliage of the wood nettle is shriveled. On our walk this morning, robin clucking in the distance. The spent goldenrod, wingstem, ironweed, and one blooming parsnip were white with the frost. The puffy white seed heads of the sow thistles had disappeared in the rain of a few days ago. Most of the leaves were down along the river.

The sycamores seemed to be the hardiest. Tonight at 7:45, Mars, as large and bright as it will ever be this century, was rising over the village; Venus was huge in the southwest. As I type this, a small mosquito hovers around the computer screen, maybe came in with some of the Christmas cacti I brought into the greenhouse yesterday.

And Cathy sent the following from Vermont: “I can’t imagine how we are going to get through the winter here. That doesn’t stop the cold weather from advancing on us. The leaves here never turned, not in the normal sense. There are still green leaves and not a lot of bare trees. Some turned a bland yellow beige and dropped off. No reds, oranges. This week we had a snowstorm and were without power, and heat, and many trees and bushes down on our property, and all around. The snow too heavy for the trees with leaves still on. We lost big pieces of a giant willow, and old lilacs, and a mountain ash. All those ancient trees and shrubs. Sad.”

2007: First light frost of the fall this morning, but it caused very little damage. In the alley, one robin, starlings chirping.

2008: First heavy northeaster blankets New York and surrounding states with snow. Ruby Nicholson sent me a note: “A kettle of buzzards (28 of them in all) were in a tree at Bryan Park today. Two other trees nearby were equally as well populated with them. They were still flying in at 4:10 p.m.”

2010: The witch hazel leaves have turned brown and are withering, but the flowers stay yellow and soft. Sweet gums half down along Dayton Street.

2011: The heaviest frost so far in the fall this morning, but the elephant ears and the zinnias still survived. The cold has silenced the crickets, and an unusual winter storm is poised to cover the East Coast with snow. Robins calling the yard, birds feeding heavily at the feeders, including the first tufted titmouse in weeks. The Zelcova trees are full red-rust-maroon, the sweet gums and the secret maple are shedding, Lil’s maple, Mrs. Timberlake’s maple and all the town ginkgoes are golden, silver maples are palomino gold (as is so much of the tree line – except the deeper and brighter shades of the oaks and sugar maples fully turned. A flock of starlings seen yesterday, a large flock of blackbirds or grackles today.

2012: Three voles caught in the space of a few hours this evening. They had been squeaking in one of the greenhouse cabinets for several days, were making Neysa a little nervous.

2013: Mrs. Timberlake’s maple has turned full gold overnight. The north hackberry holds its leaves; the south hackberry has lost more than half.

2014: A cardinal sang twice at 6:51 this morning. The first and maybe the only one before sunrise. A large flock of blackbirds and starlings flying southeast over the highway when I was driving back from the doctor’s. Mateo’s red mulberry trees, ochre, are down to maybe a third of their leaves. A vole seen scurrying across the greenhouse floor yesterday. Looking back over my notes, I see that this year’s leafturn has been considerably earlier.

2016: At the mill with Emily, 10:15 a.m., sun, mild: We parked at the old mill and walked up river for a ways looking for the robin flocks I used to see years ago. This morning, only an occasional robin peep, a chickadee, nuthatch, downy woodpecker. A few violet arrowhead aster bushes in bloom. The high canopy was almost gone, but the lower trees and the undergrowth were still mostly green. Downtown, the Zelcovas have started to turn at the top, and the Kentucky coffee tree is more than half down. In this afternoon’s sun, a few small bumblebees and one bright yellow sulphur visited the zinnias. Before supper, I transplanted the large hydrangea from the south border to near the dooryard garden.

2017: Portland, Oregon: Jill sent photos from the first snow of the year on High Street. She says the day is so raw and gray and cold. On the national news yesterday, coverage of a blizzard in northern Minnesota. Here at Jeni’s, two roses are in bloom, just like the rose bush I left in Yellow Springs on the 26th.

2018: In a day, the trees of High Street left summer. Even Lil’s tree was transformed, with Mrs. Timberlake’s keeping pace. The secret maple and all of the Champney’s maples are lush with dense gold. Moya’s maple, so green two days ago is changing. A drive through the village and the township showed full peak leafturn everywhere. Honeysuckle leaves clutter the front sidewalk, make it slippery in the rain.

2020: Hurricane Zeta moves across the Gulf toward New Orleans. Here, the day is gray and soft, peak color departing as more sugar maples come down. Jill’s small red mulberry is luminescent gold by her driveway, Frank’s mulberry glows gold below his thinning silver maple. All the Champneys’ maples are down. Lil’s maple and Mrs. Timberlake’s maple are both peaking, Lil’s burning bush finally fully turned scarlet. Robins peeping in the honeysuckles. At a small park along the bike way, decorative pear trees were deep red-purple.

The weather of a district is undoubtedly part of its natural history.