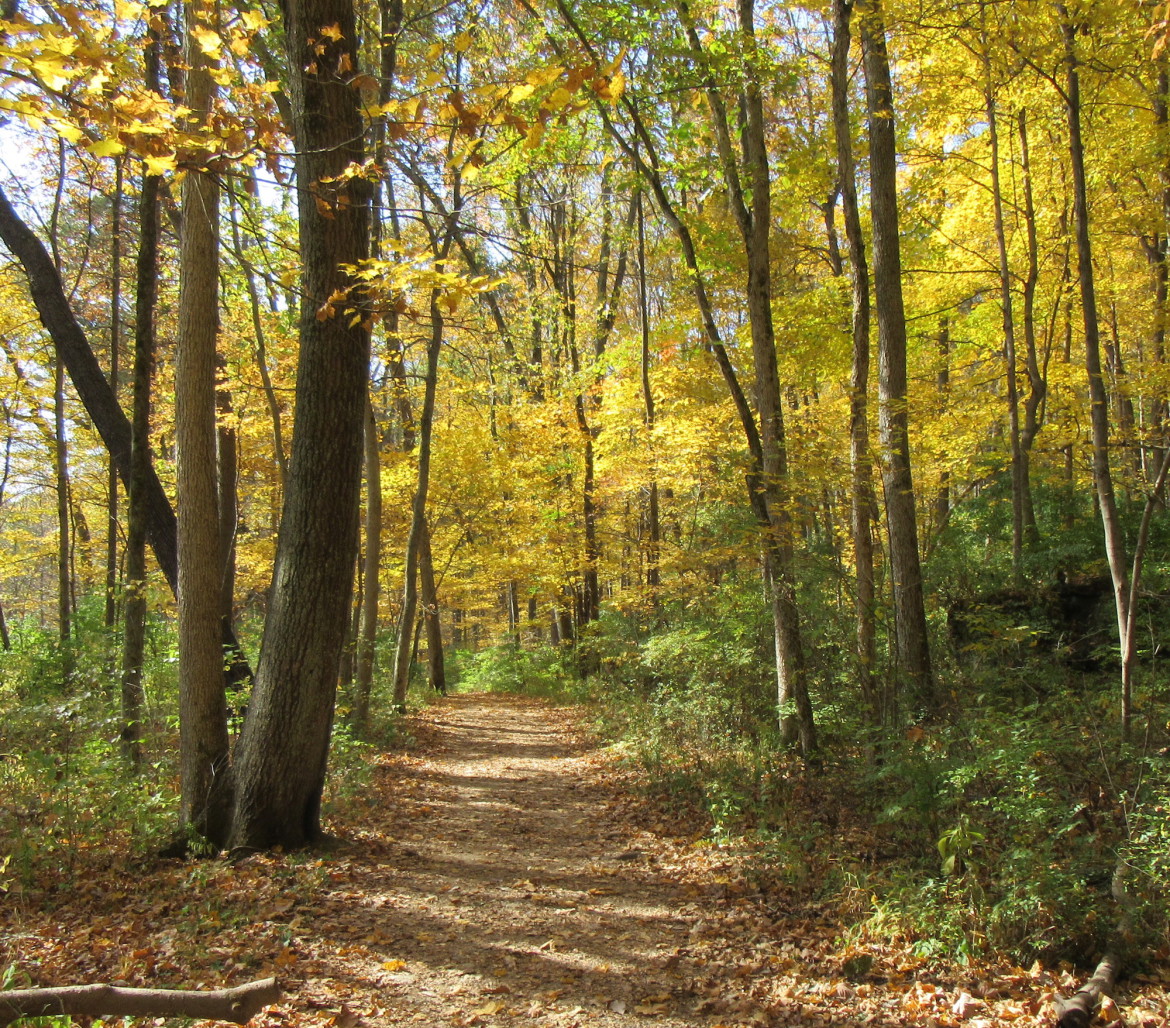 Autumn is a second spring

When every leaf is a flower.

The temporal countryside takes on its autumnal contours from the increasingly violent movements of the Earth’s atmosphere as it tilts away from the Sun.

Tapering floral sequences and the gradual surge of leafturn occur amid the remnants of Early Fall. From the broad lowland of spring and summer warmth with its six months of birdsong and its hundred days of insect calls, the Sun pulls the land up into the foothills of the year where asters and goldenrod bloom and where trees are gold and red.

Middle Fall strips away foliage, puts buds into dormancy, burns away the undergrowth and reveals the dark hillsides. At the end of Late Fall, December’s great range of cold and snow fills the horizon. Beyond it lies the high plateau of Deep Winter in which nothing ever seems to grow or change until the ground crumbles and gives way, shattered by thaws, and time tumbles down into March.

1982: Jacoby: Cattails are breaking up from repeated frosts. Only two asters left blooming by the swamp. Beggarticks stuck to my shirt this afternoon.

1984: Some ginkgoes completely green, some gold, some bare.

1985: Covered Bridge: Half of the Osage leaves are down. Dozens of robins migrating south along the river.

1988: The first line of leaves did not fall early; now all the trees seem to be coming in together. Maple in the yard is at its best, bright orange.

1989: Dramatic loss of leaves. Suddenly it’s Late Fall in the middle of October. Afternoons loud with robins and sparrows. Starlings are boisterous in the trees at Caesar Creek. Kingfishers continue their year-round commuting back and forth along the water.

1992: Kalamazoo, Michigan: The northern leaves are brighter, thicker than those in Yellow Springs, deeper reds, more striking oranges and golds, the undergrowth even more brilliant than the upper canopy. Milkweed by the side of the road: none of the pods have opened yet. At home, the last few rose of Sharon bushes (which had grown from seed this spring) are in bloom.

1997: Silver olive trees hold green along the freeway, but they are starting to have speckles of yellow. Christmas cacti by the back door have been budding for at least a week, and the New England asters suddenly all turned brown a few days ago.

1998: Warm and bright today, woolly-bear caterpillars all over the freeways and back roads. Early full leaf color now. Crows at 6:13 a.m. west of town. A cardinal sings at 6:28 a.m. Descending whinny of a screech owl at 7:45 a.m. About a fourth of the south hedge has shed its leaves, the neighbor’s house showing through. In the pond, arrowhead leaves are all shriveled, its seeds floating in the water.

2001: Cardinal sings at 6:28 a.m. Witch hazel leaves are turning yellow on Dayton Street. Some sugar maples full color, some half down. Along the road to Columbus, the bare ash and cottonwoods give a sense of Late Fall. The fencerows are bare except for yellow-green grape foliage. Goldenrod and false boneset seasons are over. Cattail foliage is yellow-brown. At my school window, the red maple is mostly gold, shedding from the top down.

2003: A lush bouquet of zinnias and two perfect yellow roses picked from the north garden.

2005: Light frost on the back window of the car this morning. Doves and cardinals were calling at 7:00 a.m. The day was warm, and a few katydids called when I walked Bella at 7:30 this evening.

2006: Impatiens and coleus killed by frost between the 10th and the 13th. All butterfly bushes gone. New England asters are ending in the yard. Reddening of the viburnum. Black rose of Sharon seedpods. Moya’s maple full gold and shedding. Hackberry trees are two-thirds down. Peach half down. Astilbe and hosta yellowing. Korean lilac and trumpet creeper ocher. Grape vines very yellow. Bittersweet dark. Lizard’s tail dropping leaves, water willow yellow green. No rose of Sharon flowers. Quince fruits in the pond’s filter. Danielsons’ maple full, Lil’s a fourth. Oaks gold and russet. Some woodlots mostly green. Knotweed seeds all but a few are gone. Many sweet gums full. In the warmth of this wet evening (63 degrees at 8:30), a few katydids were calling, some crickets.

In the countryside, mum sales are coming to a close. My classroom ginkgo is ochre. Dogwoods are deep red, full maples, artichokes waning, some locusts only fringed. Windfall apples down everywhere. Burning bush full red. Teasel stark and brown along the freeway. Pale tan of the corn. Landscape past its best in the morning rain, the loss of the ashes creating a significant change. Goldenrod has rusted but has not tufted. Geraniums, a few hosta, a few marigolds still bloom

2007: Another mild day in this mild October. Starlings whistle along the alley. In the yard, the yellow rose has one bud, pink rose full bloom, Shasta daisies with two flowers, one new purple coneflower, half a dozen pink dahlias. A tinge of gold on Lil’s maple and the Danielsons’. Frost does not appear in the forecast.

2010: I walked Bella at the school campus in the afternoon, the leaves down all along the sidewalk before they had been raked into rows or piles, the peak of leafturn ceding to leaf fall.

It was their postures and textures that interested me most. Not yet soaked from rain or flattened and darkened with age, they fell and lay in a way so different from the way they had held to their branches. Instead of the green uniformity of their summer nature, the leaves became individuals. Separated from their source, they showed an independence in their disarray. Like snowflakes, no two were alike. Like snowflakes, their distinct nature would last for only a brief time.

Some stood out because of their brilliant colors. How many different shades of brown and gold and yellow and orange and red, each shade slightly different! Some were blighted, some spotted, some patterned like butterflies. And they were so light and fragile, no longer held in place or given strength by their source, finally loose to sprawl and be taken up by the wind.

Some leaves lay balanced against grass or other leaves, forming joint designs, combining their fallen characteristics. Some were curled, never exactly the same degree of curl as the others. The tips of some leaves pointed up, the tips of others down. On some leaves only half of the leaf was curled. Some were giant and imposing, others tiny. Some were right side up. Some were upside down. But only in this new state did I notice how free they were, and how, to my eye, they could stand out, they could show themselves to me separately instead of massed together on summer branches.

2011: Cool and bright today, the sun warm against the south garden wall. One red admiral seen, but no Monarchs, no cabbage whites. Dahlias and zinnias and knockout roses continue to fill the garden with color. First beeches rusting, several ginkgoes along Xenia Avenue starting to turn. Tonight, only soft, slurred, intermittent tree cricket calls. Moya served a big bowl of her own raspberries at Jeanie’s meeting this evening.

2012: Another soft and sunny day, robins continuing to peep migration songs in the neighborhood. A surround of chatter from squirrels and starlings. At the old Mill Dam site, Bella and I walked along the river, Bella exulting in the clattering leaves. Here the high canopy is about gone, the gold of young maples shining through the woods. The river was low, three great carp seen lazing near the bank. I looked and listened for robins migrating along the Little Miami where they had been so many years ago, but even though they were moving through Yellow Springs, I didn’t find them in the woods. At home, the orb-weaver still waits in his web by the southeast bedroom window, and one of Jeanie’s purple clematis has flowered on the trellis.

2013: Robins peeping in the alley, starlings working at the gutters of the white house on Limestone Street. The first morning this autumn in the 30s. On the road to Wilmington, full leaf color all around. At Ellis Pond, more changes: the sugar maples have suddenly turned rust and gold and red-green. The sweet gums and the black maples have started to shed. Many dogwoods pink or deep violet. Catalpas pale. The outer fringe of the small, arrowhead-like Korean pear foliage are brilliant scarlet. The hickories are yellowing. Along High Street, Carl Champney’s middle maple is bright orange and losing leaves quickly.

2014: More brilliance, more unraveling. Mrs. Timberlake’s maple and Moya’s are half gone, the Danielsons’ and all of Carl’s and the Secret Maple holding at peak; and it is peak color all around the village. Lil’s maple quickly catching up. The star magnolia next to Mrs. Timberlake’s house is pale, sweet yellow, the Japanese maple behind it deep red. Only three black walnuts left on Mateo’s tree. Fresh violet crocuses in bloom along Dayton Street. Honeybees at the zinnia blossoms. Mildew on the zinnia foliage. Day lily leaves streaked with decay, hollow stalks holding stubborn. New quickweed in full bloom, taking over one of the old gladiola beds. Three yellow wild strawberry flowers.

2015: This morning, for the first time since spring, the koi did not rise to feed when I dropped in their food. I checked the water temperature: 45 degrees. I remember now how October and November brought an end to my success when I fished for carp in the river back in the 1980s. Then, in April, the first strike of the year!

2016: The Danielsons’ maple is early full, as is Moya’s. Now much of the landscape has turned a little, and leafdrop is underway for the yellowing locusts and many precocious maples. Emily reported seeing a flock of cedar waxwings, hundreds of them moving together through the south end of town.

2017: Cold in the upper 30s this morning, but by noon, in the 50s, there were six or seven painted ladies and a couple of cabbage whites in the zinnias, and the hummingbird feeder was feeding dozens of honeybees. At the northeast end of the property, Moya’s maple has not turned but has lost most of its foliage, something similar happening to the Danielsons maple. Rick sent a message this morning: “Looks like last night’s chill brought an end to the glow worms, which still were making a weak effort in the gravel along our drive the night before, which I guess means fall is finally here.”

2019: Several dozen geese in the field across from Ellis.

2020: Drive in the countryside south of town, full maple color, the landscape pale full in so many woodlots, burning bright in others, few trees bare except for black walnut trees, some ashes and box elders. Along the fields by Ellis Pond, newborn grasshoppers still hopped as I jogged to the big tree, accompanied by Ranger and many sulphur butterflies. Working in the yard as the sun disappeared, an old melancholy came over me, like a thick dream residue filling my blood.

To live a pure life, to live for the sake of life in total happiness, is to adapt oneself completely to the universe, as the trees live.