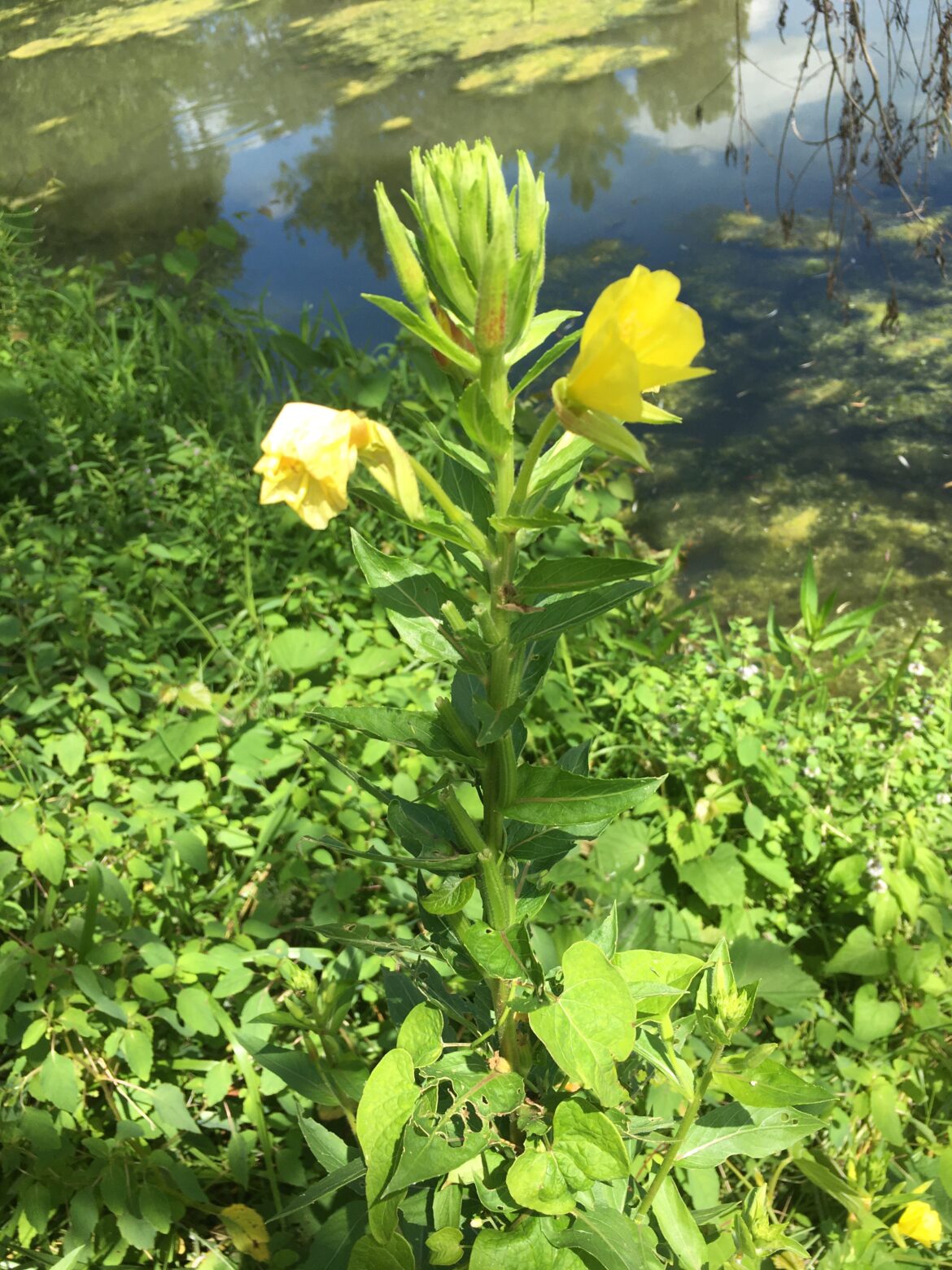 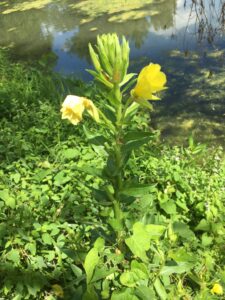 The 19th is often the warmest day in the third week of August, bringing highs in the 90s on 30 percent of all the years. Temperatures reach the 80s forty-five percent of the time, stay in the milder 70s the remaining 25 percent. Nighttime lows are in the 60s eighty percent of the time, and chances of rain continue at yesterday’s 40 percent.

Cicadas chant from an hour or so past sunrise to dusk. The crickets start in about half past seven in the evening. By eight o’clock the katydids have joined them, replacing the cicadas, and chanting katydid until morning when sometimes there is a brief period of silence before the cicadas begin the whole cycle over again.

1986: No cardinals heard today. As I was driving to Springfield, I saw a long flock of blackbirds heading north. Fishing at Sycamore Hole: carp or chubs stole bait for an hour, then left, return, biting and thieving again in two hours.

1989: Leaves turning a little now in patches across the far tree line. Coneflowers in the south garden continue full, as does the mallow. The second crop of raspberries, light for the past three years, is coming in slowly. I picked a handful about the 15th, another today.

1990: Tomatoes ripening all at once, and zucchinis begin to flower again. Mosquitoes return with the rain. A few fireflies.

1992: To Kalamazoo, Michigan: Goldenrod starts to bloom just past the Michigan border.

1993: Into South Glen: Wild cucumber common climbing through the wingstem, and purple ironweed is at its best. Across Middle Prairie, a tint of gold from the small locusts. At Mills Lawn Park, a yellow poplar has started to turn.

2001: A cool and cloudy morning, crickets singing: the cardinals didn’t start until 5:31. Six minutes later, the first dove, followed almost immediately by crows. Then a cardinal flew to the apple tree, first motion of the day. Faint, intermittent bird calls through sunrise. Even though so many apples have fallen, no yellow jackets have come to find them this year.

2004: Very few butterflies have come to the garden this month, no monarchs since the end of July. The pink stonecrop in the east garden is starting to open now, and the Japanese knotweed along the street is in full bloom.

2007: Robins started to sing at 5:20 this morning, and a cardinal called at about 5:30. Complete quiet at 5:40 until the crows arrived at 6:30 and called until 7:30. Through the alley, the tall coneflowers and the thin-leafed coneflowers are fully flowered. Blue bindweed covers one of the east fences. Mateo’s goldenrod is turning, but the other goldenrod is still just blushing. His black walnut tree has shed about a third of its leaves. The black walnut by the Catholic church hasn’t really lost much.

2008: Cardinal at 5:30 this morning, strong until about 6:00. In the alley, the tall coneflowers are in full bloom. Mateo’s black walnut is yellowing and starting to shed. The apples look ripe on the apple tree, some fruit starting to fall. Burdock full bloom. The last two lily buds in Mrs. Timberlake’s yard are set to open today or tomorrow. Some feverfew left, too. Great ragweed still holds its pollen. Moya’s white-flowered hostas fill her yard. I saw Doug Hinkley downtown about 10:00; he said he had seen a flock of several hundred grackles flying into the southwest. In the yard this afternoon, nine white cabbage butterflies, a late brood hatching, and Jerusalem artichokes in the south garden covered with dark aphids (a late-summer hatching – like the butterflies?). Chiggers were waiting for me; my legs are itching.

2009: Humid, cloudy morning, rain off and on. Doves but no cardinals heard this morning. Scorpion fly seen hunting in the bean vines.

2010: Robins singing at 5:00, cardinals at 5:20. No crows heard until after sunrise. Swallowtails (tiger, spicebush), monarchs, skippers and hummingbird moths continue to visit the butterfly bushes. One last orange day lily opening. No stonecrop flowers in our yard yet (but open at the artisans’ store). Our new red myrtle is in full bloom, and the first flowers have appeared on Peggy’s virgin’s bower. Three fireflies seen last night near Moya’s house.

2011: More squirrel chatter today. A dozen-plus cabbage whites playing in the yard all day. One monarch, one spicebush, one tiger swallowtail. Thunderous katydids and crickets tonight.

2012: No birds heard this morning until cardinals sang at 5:25. Crows at the west end of the village at 5:35, robins not coming in until well after 6:00. Late hostas continue to come into bloom, phlox and Shasta daisies almost gone. Crepe myrtles in full bloom along the north wall and in Xenia.

2013: Heavy fog early morning, gossamer webs everywhere, wet and bright. Three yellow tiger swallowtails at the butterfly bushes and zinnias this morning, and more skippers, cabbage whites, hummingbird moths. Resurrection lilies are fading everywhere in town, and most of the gladioli have finished here and at Lawson Place. Crepe myrtles not blooming yet. Webworms cut from Jeanie’s redbud and from the volunteer red mulberry by the bedroom window. Four tiger swallowtails came by while I was eating supper on the porch. A sluggish scorpion fly landed on my shirt, reluctant to fly when I brushed him off. From Annie’s window this evening, I saw a few fireflies signaling.

2014: No robins heard or seen. Cardinals, however, continue before dawn: 5:19 this morning, with doves in full song by 5:40. Four lily plants still struggle to produce their last flowers. Moya’s August hostas: drifts of white blossoms, my late hostas open, too. At night screaming whistling crickets, intense static from trigs; Peggy seems to have all the field crickets. Katydids throughout.

2016: The first cardinal sang in the back yard at 5:31. Another morning of fog. From an hour or so outside: one monarch sighting, one giant swallowtail today, one small black swallowtail, one great spangled fritillary, one brown. And a catbird in the old mock orange, the first I’ve seen here in years. A few Stella d’oro blossoms struggle in the overgrown east garden by the gate. Jill’s thin-leaved coneflowers continue to provide a strong drift of color near her driveway and back entrance. In the pond, the koi are ravenous and swim rapidly back and forth, frolicking throughout the day. At the Catholic graveyard, many green acorns from a white oak near the roadway.

2017: Returning from Keuka Lake in western New York, I noticed a number of maples turning, and the rest of the forests deep August green. At home, the Royal Standard hostas have bloomed under the crab apple tree and across the street. In the late afternoon, Jill saw a monarch in her garden.

2018: At the Glass Farm wetlands in the cool morning, very thin fog, August overgrowth throughout, spreading up to the vegetable gardens of the people living up the hill, great ragweed and horseweed in bloom and foxtail grass nodding, occasional sundrop primroses and chicory. A monarch landed in front of us as we walked, and another came by when I got home to the zinnia garden. And then I saw that the old peach tree had fallen over in the night, blocking the path. The original tree still stands behind it, long dead. The grandchild of that tree is just a little taller than I am. In the water willows near the pond, a few web worm webs – and one small one in the flowers at the back of Jill’s yard. At the triangle park, one crab apple tree is full of red leaves, and at home, the hackberry has thinned to maybe half its foliage. Tonight no cardinal vespers, but the crickets were screaming. The katydids started to rub their legs together at 7:45 sharp: “katy-katy-katy-did did-did-katydid-katydid.”

2019: Cardinals still sing in the mornings at first light. I hear dove calls, but they are weak and sporadic compared to springtime calls. Only seven resurrection lilies in bloom in the circle garden today.

More heat in the 90s. Monarchs, tiger swallowtails, silver-spotted skippers all day in the garden. Katydids began in the neighborhood at 7:48 this evening.

2020: All the lilies gone in the yard, but a large clump at Al’s house down the street. In the zinnias: multiple monarchs, tiger swallowtails, cabbage whites and silver-spotted skippers. At the pond and throughout the county, sundrops primrose (Oenethera fruticosa) in full flower.

That summer I began to see, however dimly, that one of my ambitions, perhaps my governing ambition, was to belong fully to this place, to belong as the thrushes and the herons and the muskrats belonged, to be altogether at home here. It is a spiritual ambition, like goodness. The wild creatures belong to the place by nature, but a man can belong to it only by understanding and by virtue.