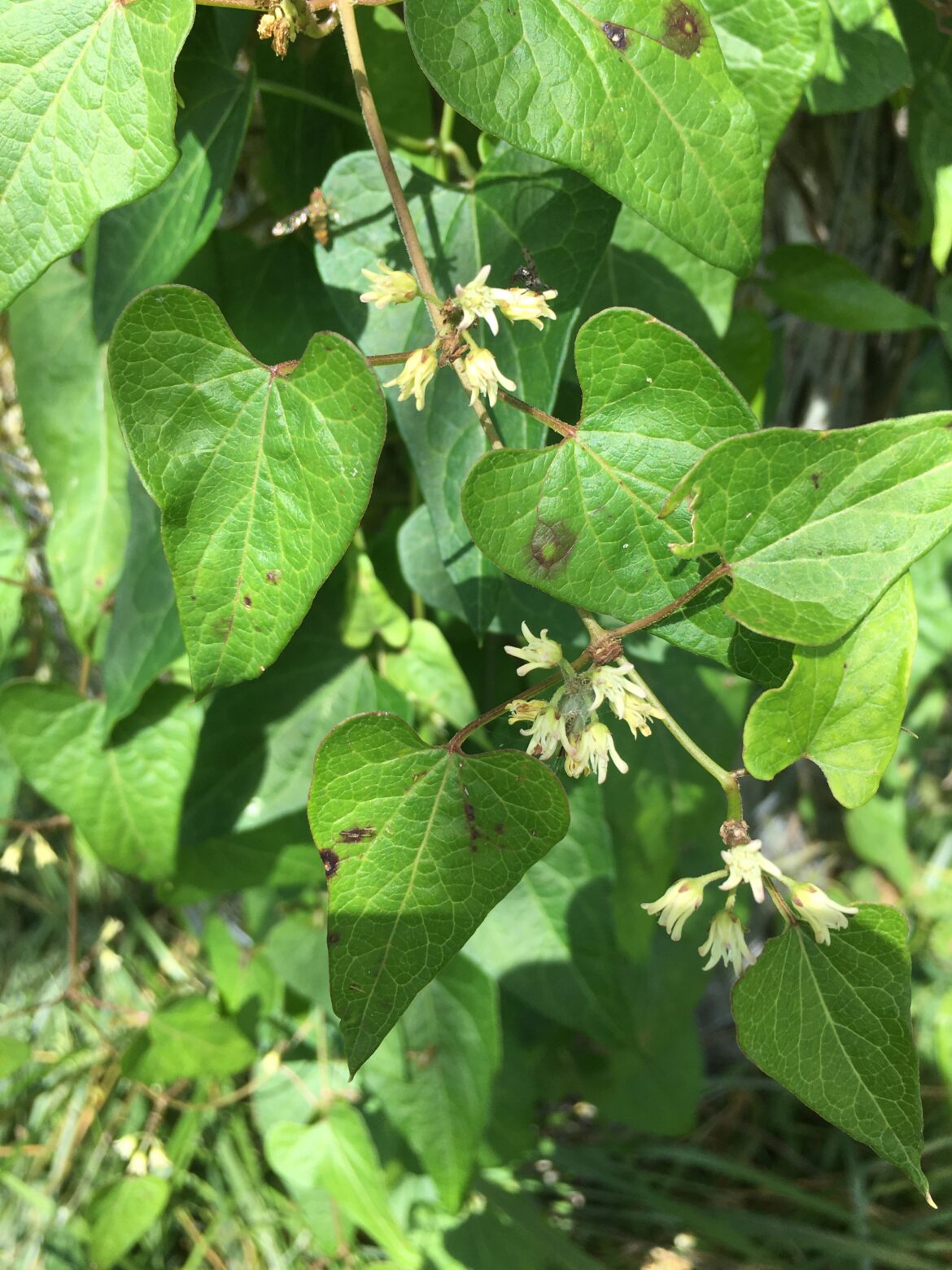 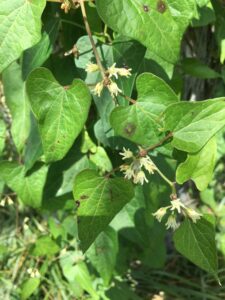 This is the time when elms wear most profoundly

Their air of revery,

Drooping over the tarnished slopes of Late Summer.

Today is typically warm and humid, partly to mostly sunny, with rain four years in ten. Distribution of high temperatures: 20 percent 90s, forty percent 80s, forty percent 70s. Early morning lows find 40 three years out of ten, reach into the 50s five years in ten. Odds for a day in the 90s are only half of what they were two weeks ago, and the likelihood of highs in the 70s is twice as great as it was at the end of July.

Beggarticks unfold their small golden flowers at this stage of Late Summer, coming into bloom as Judas maples become more common. Hickory nuts lie on the woodland paths. Buckeyes are completely formed. The panicled dogwood foliage reddens a little, its berries green. Acorns are full size, a few even a rusty brown.

Purple pokeweed berries shine through the undergrowth. Burrs of the tick trefoil catch on your pants legs. White vervain is gone, and the flowers of blue vervain climb to the top of their spikes, measuring the end of warmest time of year. Fields of brilliant oxeye, coneflower, goldenrod, wingstem and ironweed hide the decay of Canadian thistles, fringed loosestrife, skullcap, wild petunias and meadow rue.

Phlox and resurrection lilies and gladiolus flowers disappear quickly. Golden showy coneflowers have begun their three-week process of decay, and the once menacing ragweed is becoming old and empty. Along highways, the umbels of Queen Anne’s lace, so bright through Deep Summer, are contracting and darkening.

1983: Hops seen in bloom. First maple leaves in the yard are turning.

1989: On both sides of the South Glen paths, walls of golden wingstem and purple ironweed.

1990: Cardinal sings once before dawn, then is quiet.

1991: All across southern Michigan a fuchsia tint lies on so many shrubs and trees.

2000: Yellow jackets and large black and white hornets all over the fallen apples this cool sunny afternoon. A few black walnuts came down over night onto High Street.

2002: One Eastern black swallowtail seen today, one yellow tiger swallowtail, one monarch. Purple coneflowers are gone at the Women’s Park, the showy coneflowers fading there, too. Water plantain full bloom in the pond.

2004: Fall webworms found in one redbud and the white mulberry, the first all summer. Virgin’s bower is blooming in Hustead, just north of Yellow Springs, and another vine is starting near here on Elm Street.

2005: Sitting on the back porch late this evening, I watched fireflies blinking in the yard, one every few seconds.

2006: Fireflies disappeared this year in July.

2008: Two fireflies seen in Tony’s field last night. A cardinal sang at 5:30 again this morning, continued for a while. Cabbage butterflies abundant today. August Moon hostas are opening along the south border of the yard. Light leaf fall of crab apple trees at the triangle park. The ash tree at the southeast corner of our property has started to yellow. Honeysuckle berries are reddening. Several maples are turning pale. One apple tree almost bare at the entrance to town. Euonymus vines are in full bloom along the west border of the yard.

2009: I woke up at four this morning, listened to the katydids chanting. I had been reading Anthony Storr’s Solitude, and I lay in bed thinking about his note on the perception of order: “The human mind seems to be so constructed that the discovery, or perception of order or unity in the external world is mirrored, transferred, and experienced as if it were a discovery of a new order and balance in the inner world of the psyche.”

So many buckeye leaves are brown, black walnut foliage weathering, falling Most of the sycamore bark has come down now. Patches of bright scarlet in the sumac. A shower of yellow hackberry leaves from just one side of a branch. One cardinal singing almost exactly at sundown. Two blue herons circling above the fog which formed below me in the hollows. Robins calling steadily, almost drowned out by the crickets and cicadas.

I think that what can happen in noting such details is that a kind of order is experienced (whether that order reflects some actual pattern or not), and once that unity is internalized, then there is a breakdown of alienation, a personalization of an otherwise indifferent context.

Then seasonal time and place fill the eye of the beholder, producing an act of possession that is a step toward self-hood and then of making sense and of finding home in which nothing is out of place.

2010: Spicebush, Eastern black and tiger swallowtails all day today. At noon, the Eastern blacks whirled around and around in an intense randori. Throughout town, many black walnut trees have thinned to maybe half their leaves. In the back yard, we found one more tent caterpillar tent, this one in the white mulberry, just out of reach. The very first pink stonecrop buds have opened in the dooryard. Jeni saw two fireflies when she walked Bella tonight.

2011: One tiger swallowtail, one long green, striped caterpillar with a green horn on its tail, didn’t fit any of the pictures I could access. On this morning’s walk: high-trilling crickets, cicadas, field crickets, and a red-tailed hawk circling the village, crying out, “creeee.”

2012: Faint robin song at 5:20 this morning, but no cardinals heard until after sunup. Wren chattering near dawn. “Handsome trig” found on the car later in the morning, may be the kind of insect that makes the high static cricket sound at night. One sparrow fledgling seen being fed. Bright finches still come to the feeders.

2013: More tiger swallowtails and another giant swallowtail. The very first sedum flowers in the dooryard opened over night.

2014: Cardinals at 5:24 this morning, crows at 5:37, doves by 5:40, no robins. A bright, warm day with numerous cabbage whites, silver-spotted skippers, several tiger swallowtails, a giant swallowtail and an Eastern black. One naked lady and one rebloomer the only lilies still open.

2015: An inch of rain in a storm yesterday evening pulled over most of the amaranth, Joe Pye and tithonias: August – cutting down time. But in the faded Asiatic and Oriental lily bed, one small white stargazer that Jeanie had planted was blooming this morning, the very last lily of the year. This afternoon, I walked into the orb-weaver web across the shed door. How many years have I done that!

2016: Dove heard before 5:30 this morning. To Cincinnati in heavy fog: sundrops, and dominant horseweed, late darkening Queen Anne’s lace, wild cucumber wandering through hedges, brown teasel, rows of glowing (but not flowering) goldenrod, a few naked ladies, one treetop covered with a webworm web (the first noticed this August). I came home in light, intermittent rain to a monarch butterfly hanging out in the zinnias. Last night, Rick told me he had seen glowworms glowing in the grass and monarchs visiting his flowers.

2017: In the sunny zinnias: one red admiral, two small silver-spotted skippers mating, occasional cabbage whites. Took milkweed to Barbara Carroll to feed her monarch caterpillars she had captured from her garden. Working in her back yard, Jill saw a monarch, her second since our return from New York. In my northwest garden, the Joe Pye weed is all gray, and the heliopsis is three-fourths finished. My Royal Standard hostas are now in full flower, and Moya’s August Moon hostas fill her yard with white blossoms. In front of Don’s house on Dayton Street, his thin-leafed hostas are starting to put out violet flowers. My thin-leafed hostas have budded stalks but no flowers.

2018: A white Stargazer lily that Jeanie had chosen, one of the last to survive the weeds of the past several years, opened yesterday evening. This morning in the sun, two monarchs courted all around the zinnias.

2019: A few katydids heard at 4:15, but not after that, this morning, one cardinal at 4:25 followed by only crickets until 5:15 when the cardinals began their conversations. Royal Standard hostas in the back gardens are in full flower. Giant swallowtails, monarchs, silver-spotted skippers, tiger swallowtails in the garden.

2020: More monarchs and tiger swallowtails in the zinnias and tithonias today, and an increase in silver-spotted skippers and cabbage whites. It feels as if yesterday and today have been the peak, so far, of butterfly presence. In the back garden near the pond, the Royal Standard hosta is just opening (the August Moon hostas in full flower at Moya’s). At the pond, climbing false buckwheat (Fallopia scandens) remains in full flower.

In the long rays of the last light of that mild August evening, I looked and saw that the chlorophyll had begun to drain from the long stems of the water plants, that a line of brown had begun to form at the waterline of the pond. I noticed that with the sun suddenly down, the air had become unexpectedly cool against my bare arms.