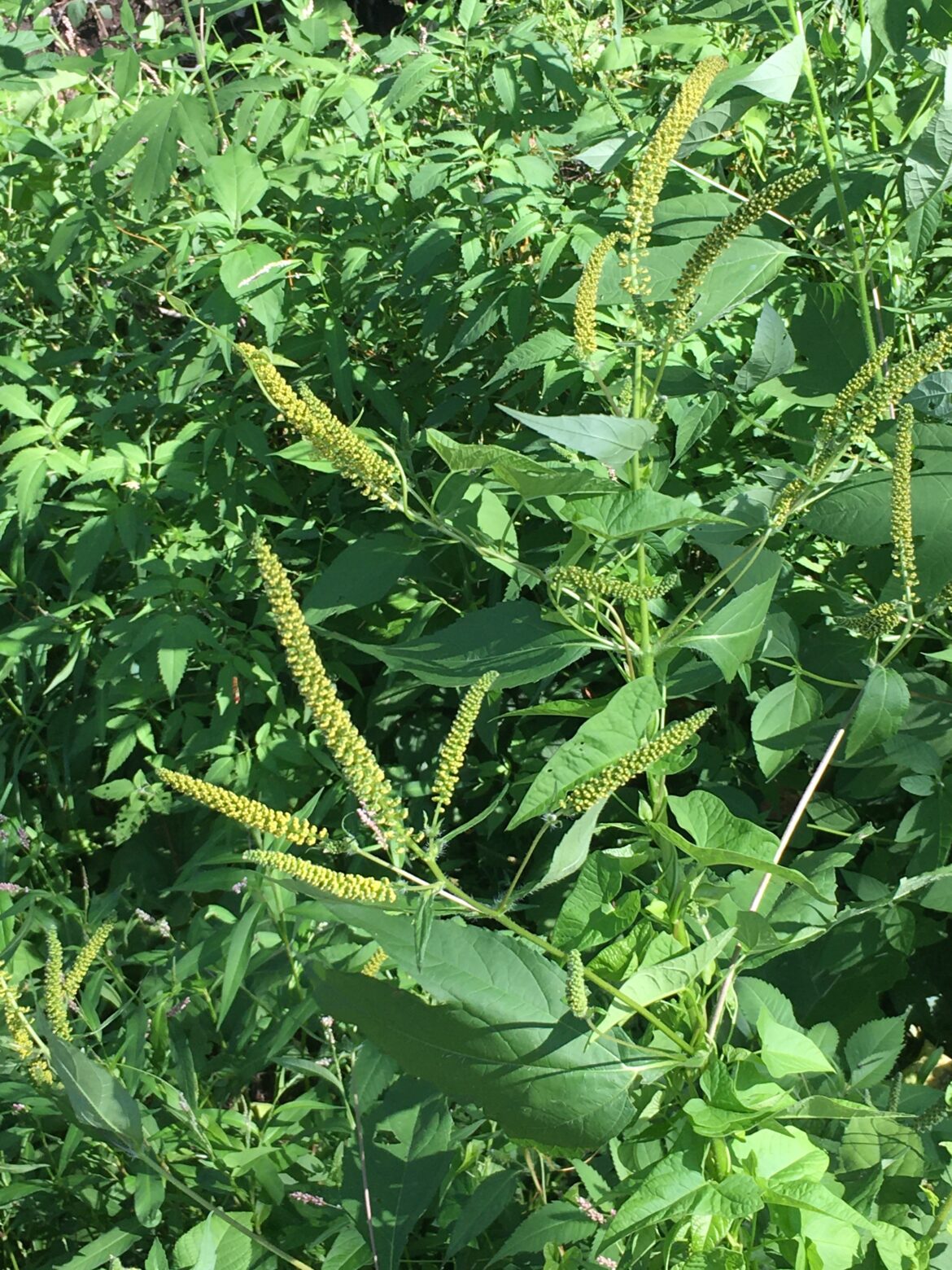 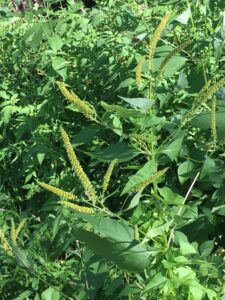 The humming bee fans off a shower of gold

From the mullein’s long rod as it sways,

and dry grow the leaves which protecting infold

the ears of the well-ripened maize.

Today is the last day that temperatures above 100 are likely to occur for the rest of the summer (although the slight possibility remains through the first week of October). Almost three-fourths of the afternoons, however, are in the 80s, the remaining fourth in the 70s. The sun appears 70 percent of the time, and showers pass through four days in ten. Evening lows are in the 60s seventy-five percent of the nights; they fall to the 50s fifteen percent, to the 40s ten percent.

Plums and pears are ripe in the orchards, and the summer apple harvest is more than half complete along the 40th Parallel. Farmers are making preparations for the seeding of winter rye, wheat and barley. Second-brood corn borers, the second generation of bean leaf beetles and the rootworm beetles still feed in the fields. Banded ash clearwings attack the ash trees.

In the night sky, the Summer Triangle shifts into the west, following June’s Corona Borealis and Hercules. Delphinus, the Dolphin, is due south. After midnight, autumn’s Pleiades rise up over the northeastern tree line. Orion fills the east before dawn.

1989: The panicled dogwood near the stream on King Street has its first white berries.

1987: The tropical storm season is underway in the Caribbean, first storm named a week ago. In central Indiana, catalpas, poplars, cottonwoods have faded and some are yellowing, soybeans a third turned, some corn browning, late thistles full bloom.

1992: Resurrection lilies still full bloom in town. On the bike path south, tall mulleins, black like dead cacti, all the way to Jacoby.

1993: On Stafford Street, a blush of red to a small redbud tree. At Mills Lawn, one black walnut has thinned to maybe half its leaves, some of its fruit fallen. A cluster of yellow black walnut leaves has come down on High Street just a few feet from our yard. In the north garden this afternoon, a flurry of black walnut leaves came down into the asparagus bed from the tree on other side of the hedgerow. At Wilberforce, many crab apple leaves destroyed by skeletonizers, some trees almost bare. Still an occasional firefly in the back yard.

1997: A few fireflies tonight in the warm, wet evening. Thunderstorms moving across the valley.

1998: No fireflies seen for so long; the drought of the past month deepens. Cardinals sing at 5:25 a.m., crows about 5:40. Flocks of geese flying over Yellow Springs the past two days.

1999: Fishing today at Caesar Creek: Buzzards overhead and great blue herons every few hundred yards. A family of ducks came begging for food at my boat, then moved on. The tree line is yellowing: cottonwoods, box elders, ashes, maples. Coneflowers and ironweed, Joe Pye weed, swamp milkweed still in bloom. Wild grapes are dark purple. One catfish caught today and yesterday, pan fish biting at the pan fish hole. In the countryside, some cornfields stressed and withered by the drought; others are completely brown and dead. At the dairy, a baby bird, all pink, an inch long, had fallen from its nest to the picnic table.

2001: The waning moon rising over Glen Helen at 4:50 this morning; above it was giant Venus, a little further up, Jupiter. The Pleiades led them on. Only crickets called until 5:12, then a faint song from a cardinal. At 5:26, crows, 5:28 a blue jay. At the school park, two black walnut trees are almost bare. Along the freeway, one cottonwood has lost most of its leaves. At South Glen, the first jumpseeds were loose, just able to jump.

2003: Whistling crickets when I got up at 4:30 a.m., fourth quarter moon high in the southern sky. At 5:00, no birds. Cardinals heard at 5:30, then silence. Crows continue to stay away from Yellow Springs, but several people I’ve talked to recently say crows are still common where they live in other suburbs. One monarch noticed today, several tiger swallowtails.

2004: One arrowhead flower appeared in the pond today, but the plants themselves are not strong this year, are deteriorating along with the rest of the pond vegetation.

2005: Two painted lady (Cynthia) butterflies in the zinnias late this afternoon. Monarchs and swallowtails common throughout the day. One arrowhead plant is in full bloom in the pond.

2007: Stonecrop sedum starting to flower in the east garden.

2009: Cardinals and doves still singing from about 5:15 on this morning. Crows passed through an hour later. Two days ago, I saw a swarm of small ants crossing the sidewalk along Dayton Street. This morning as I walked Bella at about 9:15, I saw another mass movement of similar-size ants. Two flocks of starlings seen in Beavercreek and Dayton. The first pink stonecrop flowers opened in the east garden this afternoon.

2010: Robins at 5:10 this morning, cardinals at 5:20, crows late at 5:30. No doves heard for at least a week. Several monarchs, red admirals, tiger swallowtails and spicebush swallowtails in the butterfly bush at lunchtime. Four hummingbird moths sipped nectar at the same time.

2011: Cardinals again this morning, 5:09 a.m. One dove heard when I walked Bella after breakfast. Only a couple of orange day lilies bloomed today; they are reaching the very end. Some of the rebloomers keep on coming in, however. Sparrow fledglings still begging. Five cabbage butterflies on the catmint this afternoon. Screaming cicadas tonight at 7:00 p.m. and occasional field crickets.

2012: Overcast morning, cold front still off to the east in Indiana, no cardinals or robins until 5:30. Some of the stonecrop in the dooryard has been in flower for well over a week. First large bowl of peaches for breakfast this morning: full peach time has begun. Resurrection lilies have disappeared, heat stressing the zinnias, phlox and Shasta daisies ebbing.

2013: Only field crickets chirping and tree crickets buzzing heard when I went out at 4:40 this morning. First cardinal heard at 5:24, no robin calls before or after dawn. Tiger swallowtails, hummingbird moths and hummingbirds seen here and in Cincinnati, starlings on the power lines along Dayton-Yellow Springs Road, robins beginning to flock in the woods by the St. Clare monastery. An ochre tint to some of the cottonwoods, a shadow of pale gold through some of the soybean fields.

2014: Cardinals throughout the neighborhood this morning singing at 5:14, sky clear, half moon overhead, bats passing above me, constant, loud static of crickets. Crows and doves at 5:45. Only two lilies blooming – the fading naked ladies. Four male tiger swallowtails (one quite old and tattered), a giant swallowtail, and several silver-spotted skippers, cabbage butterflies and folded-wing skippers worked the zinnias while I made notes outside on the porch and then hauled wood. In our pond, arrowhead has passed its best, some leaves yellowing, most flowers to seed. At Ellis yesterday, a small mint (Menthe arvensis), has spread in the grass, in full bloom by the side of the pond. I will try it in with the arrowhead at home.

2015: Return from Oregon: The amaranth plumes have kept their color, even though the stalks have grown too tall and are falling over. The heliopsis is ragged and mostly rusted (and full of red aphids), and I cut back a lot of it – along with mats of monarda and rusted tall ferns. (The heliopsis, the zinnias, the amaranth, the hydrangeas and the monarda should all be supported with open fencing or strings next year.) The huge red hibiscus flowers have all wilted on the main stalk, a couple left on a side stalk. The tithonias have pushed out all the zinnias – but have filled in several holes left by the drooping hydrangeas and spent lilies (overgrown now by smartweed). The Joe Pye flowers have begun to decay as the goldenrod buds become more prominent. Jeanie’s stunted yellow rose has one flower – the first of the year. The first purple ironweed in the yard came into bloom, nestled among the tithonias. Japanese knotweed is in full bloom – I hadn’t noticed it before I left a week ago, and the wisteria that has taken over the trellis has several flower clusters – like the wisteria next door to Jeni in Portland, Oregon. Moya’s white moonflowers are all open, and in Peggy’s garden, early virgin’s bower and the white autumn allium are in bloom. A few swallowtails and a monarch seen around home today.

2016: So much like last year. The purple ironweed even started to bloom over night. One male tiger swallowtail, and the first sulphur I’ve seen all summer.

2019: Outside at 5:00 a.m. to the calls of tree crickets and hard waves of whistling crickets. At 5:10, the cardinals began, and they sang throughout my walk, at least until 5:30. To Cincinnati in the morning: black-eyed Susans everywhere full bloom. At home in the afternoon: monarchs, tiger swallowtails, Eastern black swallowtails, silver-spotted skippers, cabbage whites.

2020: Crows just before sunrise. Only two resurrection lily plants still have blossoms in the circle garden, six flowers in all. In the zinnias and tithonias: monarchs (three at one time), half a dozen cabbage whites, scattered fold-wing skippers, as well as tiger swallowtails continue to hang out. At Jill’s, the black walnuts are coming down, making it tricky to walk through her side yard. At Ellis Pond, ragweed is golden with pollen.

Nature does not cast pearls before swine. There is just as much beauty visible to us in the landscape as we are prepared to appreciate, – not a grain more.