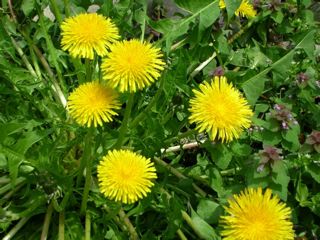 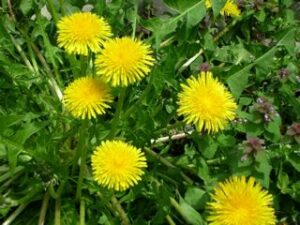 The 99th Day of the Year

The grass of spring covers the prairies,

The bean bursts noiselessly through the mould in the garden,

The delicate spear of the onion pierces upward,

The resurrection of the wheat appears with pale visage

out of its graves.

The second week of Middle Spring opens Strawberry Flowering Season and brings the peak of Daffodil Season, Squill Season, and Grape Hyacinth Season all along the 40th Parallel.  Throughout the Ohio Valley, it’s Creeping Phlox Season and Wind Flower Season. It’s almost always Pear Flowering Season along the streets and Wisteria Season on the trellises. Middle Spring Wildflower Season keeps most of its early flowers and adds many more. It is full Spring Beauty Season in the lawns. In the woods, it is Toad Trillium (the small red-flowered trillium) Season. It is the peak of Virginia Bluebell Season, those flowers filling the hillsides. It is Cowslip Season in the wetlands, Trout Lily Season and Jacob’s Ladder Season beneath the budding canopy. It is Redbud Blushing Season along the roadsides into Appalachia as redbuds get ready to open. In town, Tulip Season and Fritillary Season gain momentum.

1990: Isaac Walton: “Some have been so curious as to say the tenth of April is a fatal day for Carps.” Not so today in South Glen.

of cowslip, ash by my window leafing. A flock of buzzards seen engaged in mating rituals in the middle of a bright green field of winter wheat. Apples budding, showing pink.

1993: John calls from New York Mills, Minnesota: first butterfly of the year, a mourning cloak, seen April 4, the earliest he’s ever recorded a butterfly sighting. Here in Yellow Springs, cool and rainy, not even a cabbage butterfly so far. Snow trillium found full bloom along the river. The first finches have turned, though; there were two with bodies almost completely yellow today.

1994: Spring still so late. Hepaticas and Dutchman’s britches are almost all the way open in the woods, and toad trillium, bloodroot, toothwort, violet cress, bluebells are up and budding. But it’s still the end of March or the 1st of April in the woods. Here at home in the north garden, comfrey leaves are just an inch long, phlox foliage has only begun. Bleeding hearts are an inch or two high, stems and all leaves still red. Astilbe has started, purple coneflowers have just come up, stonecrop getting new leaves. Flickers have been calling in the back trees for a week now. Grackles are in the yard. In the south garden, all crocus and snowdrops have gone. First wood hyacinths are blooming, grape hyacinths too. Blue anemones hold. Daffodils are in early full bloom now. Pansies, mallow, feverfew transplanted.

1995: Most pussy willow catkins are falling. Glory of the snow is gone. Squills are fading, and many of the early daffodils, putting an end to the second bulb season.

1998: Strange frog or toad call at 6:30 this morning, like an American toad, but lower and shorter. Wild phlox open at the mill. Cedar waxwings – a flock of them – outside my window at 1:15 p.m. Box elder flowers falling, branches leafing. Lower shrub line a third to half filled in now.

2002: Peak of daffodil bloom just as the first phase of the major dandelion bloom starts.

2003: Cowslip in bloom across from the Covered Bridge.

2004: Seen from the hotel window, the hills south of Asheville are gray, but they glow slightly gold in the sunrise. There is the palest tint of green to the far undergrowth, and the trees are still bare. The half moon lies in the southern sky. House finches fly back and forth around my window, must have a nest nearby.

2008: Willows are pale green against the horizon. Walking with Jeff beyond Cedarville, I saw several Dutchman’s britches budded and one toothwort budded. One towhee, a pair of wood thrushes and a pair of large wrens seen. Jeff said Kit had told him about hearing a catbird. Some swamp buttercup foliage, but no flowers. Around town, some patches of glory of the snow are in full flower. Our red-leafed crab apple tree is leafing, and Japanese honeysuckle leaves pace the wild rose leaves, turning the front fence green. Pussy willows filled with pollen over night. The star magnolia across the street is coming into bloom. Astilbes and bleeding hearts are leafing, and candy lily clusters are an inch high. Red Japanese knotweed has emerged. On the bike path near Cedarville, small newborn snakes seem to have been drowned on the pavement in the recent rains. Five fingerlings counted in the pond. Don’s pink and violet hyacinths are completely unfolded. Grackles cluck in the back trees and finches feed, but the loud cardinal songs during the day seemed to have stopped.

2009: Bamboo shoots seen this morning, some about three inches high. On Dayton Street, Don’s serviceberry trees are starting to flower, and some blue windflowers are open. Some crab apple buds are cracking and showing color. A squirrel chattered in the alley this morning, the first time I’ve heard that in a while. More dandelions coming along the roads throughout the county. This evening as I walked Bella, grackles were clucking throughout the neighborhood.

2011: To Sharonville, 60 miles south of Yellow Springs: into a completely different season, one of full-blooming apple and pear trees and pink magnolias. In Dayton, pears are just starting in the rich center of daffodil bloom. This evening as I walked Bella, cardinals, doves, robins were singing. Pussy willow catkins almost all down in this afternoon’s rain.

2013: First white cabbage butterfly seen today. The pileated woodpecker continues to call from the back trees, and the red-bellied is vocal, too. Several piles of algae removed from the pond. I had been waiting for the toads to lay their eggs in it, but the growth seems to be out of hand – and growth is out of hand also everywhere around the yard, Middle Spring surging. First periwinkle seen along High Street.

At Ellis Pond, south wind warm and hard, blue-eyes, bittercress, and deadnettle in full bloom, hemlock a foot tall now. The buds of so many of the trees are swelling, pushing: white ash, redbud, Chinese maple, hornbeam, Chanticleer pear, plum, sassafras. Crab apple trees are leafing here and at home. The Red Sunset red maple is in bloom, and a star magnolia has opened downtown.

2014: Robins singing at 5:05 this morning, cardinal heard at 5:30. Chris sent a photo of a trout lily she found in bloom. In the garden, a little green showing on some ferns, the tips of a few hosta just pushing out, and the first of the delicate Asiatics and oriental lilies emerging. Walking Bella, I found one red tulip open, and a large patch of violets in bloom (and so their average blossoming date this cold year was only delayed three days). The buds on Don’s serviceberry trees are straining to open. The pussy willows are holding their pollen.

2015: Last night, Bella woke me up; then came a great thunderstorm, and I lay on the floor with her so she wouldn’t be so frightened. Hard rain, the yard flooded this morning. Crows heard at 6:00, grackles to the feeder at 6:30. The first of the mass dandelion bloom noticed on the way to Beavercreek this afternoon. The lone bloodroot by the lungwort opened over night, small, perfect, white.

2016: To Cincinnati in light snow and wind: pears definitely darkening with new foliage and petal loss, forsythia gold darkening, as well. Spring is on hold for the moment, however, high only in the 30s this afternoon. At the monastery of St. Clare: patches of the mid-April dandelion flowering, and the redbud in their garden outside the chapel windows is in early bloom. Their Cornus mas is leafing, was bright with blossoms when I visited on March 13.

Reflections on the awareness of time and space as my body traverses the landscape of spring in Galicia, the linear nature of my pilgrimage, its intent fused into my motion,, the linear road ahead which I not only follow but also imitate and create, parallel entities each perhaps aware of the other, the changes in the landscape patterning or following or forcing changes in thought or physical energy. I am aware that my intent adapts, as well, to the motion of wind or the sound of birds, the stretching out of the plants, the leafing of the trees, following my daydreams as well as the dreams of my sleep, the intent always traversing the porousness of my mind and body, cleansing, strengthening, giving purpose and meaning, given purpose and meaning with the tidal conversation of beings and motion, desire and acceptance,

Much time to reflect on the entire cultural scope of Christianity and European history, combined with the realism of the walk itself, the sense of immediacy that comes from combining physical exertion and discomfort with the prayerful intent and request and offering of the pilgrimage itself.

Since I cannot do anything but accept the outcome of my physical journey, the walking is like an opening into lectio divina, waiting for the waters to move and the voice to come. The demands of the walk create a new space that is difficult to experience in daily secular life – or I suspect – in daily monastic life. As to what will happen in the end…that is not, thankfully, up to me. Which, of course, is the whole point.

2019: Hobblebush, the Annabelle hydrangea and the east crab apple tree have all started to leaf.

2020: Now more rain and hard wind, the supermoon bringing a change of season, tattered cumulus clouds racing out of the north, petals all across the ground.

The names we give to plants are important; more important are the spaces between them which have no names, which hold the possibilities for endless variation, for infinite spontaneous generation.