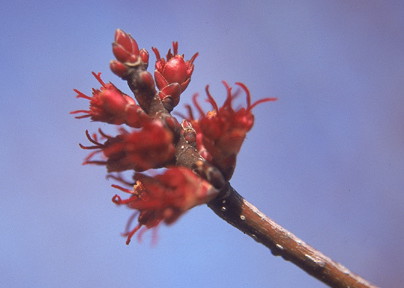 The seasons, like greater tides, ebb and flow across the continents. Spring advances up the United States at the average rate of about fifteen miles a day. It ascends mountainsides at the rate of about a hundred feet a day. It sweeps ahead like a flood of water, racing down the long valleys, creeping up hillsides in a rising tide. 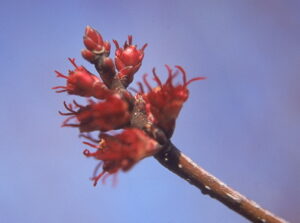 Past the year’s one-hundredth day, the Lower Midwest is overwhelmed by Middle Spring. The effects of rising temperatures and the longer days are cumulative. Suddenly, the tree line is greening. Mulberry, locust, tree of heaven, viburnum and ginkgo send out their first leaves. Magnolias, redbuds, lilacs, dogwoods, cherries, peaches, apples, quinces, maples, and pears are almost always flowering by the 15th.

At the forest edge, knotweed and nettles are tall enough to cut for supper. Flower heads are forming on the sweet rockets and the garlic mustard. May apples spread their shade across the talus slopes of North Glen. Deep in the woods, the momentum of time and weather opens the soft ginger and raises morels from their mulch. Low patches of wild geranium leaves glow orange in the sun. Buds on the grape vines are swelling. Hobblebush and the privet are filling out. Branches of multiflora roses are almost completely covered with foliage. Along the Little Miami, pale spikes of lizard’s tail are  dragonflies.

All across town, honeybees indulge in the seasons of flowering peach trees, forsythia, pears, quince, magnolias, crab apples, cherries, and the last of the Cornus mas. Young hummingbird moths and bumblebees come out to sip the annual mass flowering of dandelions.

As lawn mowing season enters its second week, wild turkeys are gobbling. Late and mid-season daffodils are at their peak, and earlier varieties are gone. Tulip time is here. The delicate fritillary blossoms. Crab apples start their season (last year’s fruit finally falling to make way for the new).

1984: Mill Habitat, upper and lower, 62 degrees: May apples just up, geese scouting for nests along the river, snow trillium full bloom, violet and white hepatica all over. Water striders animated for the first time this spring, seem to be mating. Rue anemone blooming, harbinger of spring. Buckeyes still not leafing. A frog screamed as I walked by and jumped into the river, first frog of the year. At home, pussy willows suddenly have pollen.

1985: Pussy willow catkins almost gone. A year ago, they were just starting to turn gold.

1986: Cardinal sings 5:25 a.m. Along Grinnell, cowslip full bloom across from the Covered Bridge.

1987: Cardinal sings 5:30 a.m. Into southwestern Ohio: coltsfoot blooming by the roadsides. All across the middle of the state, the tree line is flushed, barely greening. Road kills: groundhogs common. At Wilberforce, early full bloom of dandelions. First

1988: Bleeding hearts have buds. Freeway grass near full green. Dayton tree line pale green throughout, but the countryside is still orange, red, and green. Jeanie reports from Midland, Michigan, 300 miles to the north, that the crocus are just blooming there.

1989: Even in the cold, the dandelions have started early full bloom.

1993: Another yellow goldfinch today, but maybe more than half of them still have their winter colors. First spring beauties seen at the Mill. Buckeye leaves just breaking out, not quite open yet. At home, beggarticks have sprouted at the north wall.

1995: Hail and wind last night. A tree at the Antioch School was destroyed by lightning. At Grinnell pond, twinleaf has started to bloom. Dutchman’s britches fully open now. First violet seen along the path. May apples are up three or four inches, their leaves starting to unfold. Box elders have begun to leaf out. Red-flowered toad trilliums are open in places; one trillium grandiflorum has a bud. The buds of the bluebells hang down, emerged from their sheaths of blue green. Deadnettle blooming throughout (I saw it open as much as a week ago). At the park up the street from my house, the red maple flowers are decaying, coinciding with the end of the second season of Early Spring bulbs. First cowslip seen across from the covered bridge.

2002: Along Limestone Street, privet is pale green, pacing the color of the weeping willow there.

2003: Grass ready to be mowed.  First patch of dandelions seen in town. Some white magnolia petals are falling on High Street.

2004: Returning to Yellow Springs from Asheville: Approaching the Tennessee boarder, we drive into a sudden change of season, the tree line green, and redbuds increasing in numbers. In Knoxville, it is full May, with even violet iris in bloom. Japanese knotweed is at least a foot tall about halfway to the Kentucky border. Redbuds in bloom remain frequent now into Cincinnati, then disappear by Dayton. In Yellow Springs, pears, plums, and the Dayton-Street serviceberries are in full bloom. At our house, the peonies are a foot tall, the red quince, the peach tree and the early tulips are open. The cowslips at the Covered Bridge have come into full flower.

2006: Yellow and brown fritillary open in the east garden. Purple magnolia opening in the High-Stafford Street alley. Star magnolia beginning to drop petals. Early full pears downtown. Pussy willow full of pollen. Early full dandelions along the road to Dayton, the undergrowth pale green. South to the Ohio River: a few trees puffed pale green throughout the hillsides. Apples blooming in Aurora, Indiana, trees greening in Rising Sun, forsythia aging, olives leafing, bright fields of purple deadnettle, fields and roadsides of yellow winter cress. Small-flowered buttercup at Patriot Landing, box elders in bloom, violets, two leaves on the touch-me-not sprouts, dock and hemlock boot high. Some pears leafing in Patriot village. Daffodils old, some garlic mustard heading. Faint blush to the redbuds. Red quince blooming on Market Street in Vevay. While I was gone, Jeanie heard the green frog croaking in the pond for the first time this year. And she said that one of her kindergarteners came to school with a cup full of baby frogs.

2008: First yellow tulip opened in the south garden this morning. The first pink lungwort flowered under the mock orange. The red quince is budding. In Wilmington, the decorative pear trees have started to come in; there are even a few flowers in Xenia but not in Yellow Springs. The first cowslip is open at the Covered Bridge.

2009: A cool Good Friday, but I saw one bleeding heart in full bloom. Grackles continue to cackle and cluck throughout the neighborhood. Robins are becoming less common, pairing up, perhaps, or saving their energy for early-morning courtship. All over Yellow Springs, pear flowering is at its peak. This evening at the park, I found the first crab apple breaking out.

2011: Weeding in the first day of temperatures in the 80s. The first carpenter bees noticed, and the first box elder bug, the first red tulip in the north garden. Daffodils have started to fade. Spirea leaves are thin, well developed. In the heat, Peggy’s pear tree bloomed, and Don’s serviceberry trees.

2012: More leaves appearing on the redbuds as the azaleas gradually open in the cool afternoons. Tulips hold and the last daffodils. On the road south of town, almost all the crab apples have lost their petals. The Korean lilac is trying to open, and the first of the purple wood hyacinths has started to come undone. The wisteria on the trellis is almost gone. Honeysuckle leaves are full-size, Lil’s maple and burning bush leaves almost full. When I cut the grass today, I noticed that most of the violets were done blooming. In the countryside, many dandelion patches hold, even as more apple petals fall. Our redbuds hold at half violet/half tawny. Older sweet Williams budding. All the dogwoods still completely intact.

2013: Katherine says she saw a pair of pileated woodpeckers in her yard yesterday. My pileated has been calling all week – and the red-bellied, too. In the alley at dawn, grackles and starlings in small clusters, cackling and squealing and whistling as they socialize. The lawn is almost getting ready to cut, many areas tall enough, others hardly greening. Next week will be the time. More star magnolias flowering throughout town.

Into North Glen: The broad range of Middle Spring wildflowers in bloom: spring beauties, lesser celandine (found for the first time at the Cascades, all the flowers with eight petals), lush white, violet hepatica, yellow trout lilies, bloodroot, violet cress, and Dutchman’s britches. Toothwort budded, one May apple about two inches out of the ground, and a tiny trillium grandiflorum just emerged. No bluebells or twinleaf seen, but our bluebells are budded at home. Spicebushes are in full bloom throughout the undergrowth on the way to the Yellow Spring. Got back just before the first major thundershower of the year, with hail, too.

2014: One star magnolia bud is almost ready to open across the street. The pussy willows are starting to come down in the wind. A few small tips of hosta found in my garden walk. Daffodils are still in full bloom, grape hyacinths coming in. Driving to Dayton, I saw the first patches of dandelions (very late!) and willow trees greening up.

2015: Spent the day with Tat transplanting. The first cabbage white butterfly of the year visited the northeast garden. The first hostas are visible now, some about an inch high. The  early yellow tulips by the south wall, the first tulips Jeanie and I planted three decades ago, opened over night. Other tulips in the yard have buds. In rain and wind, almost all of the remaining pale bamboo leaves have come down with the pussy willow catkins. Compensation: the new bamboo is coming up.

2016: From Campello, in the hills above Spoleto, Italy Neysa sent photos of a huge patch of purple cyclamens and a tall lilac bush all in bloom, along with a cluster of wild asparagus. If this year’s April hadn’t been so cold, we would be neck and neck with central Italy. At home, the ancient oakleaf hydrangea is starting to leaf; it will have one more year, it seems. The Indomitable Spirit hydrangea is alive and has small buds. In the south garden, the rudbeckia plants that I planted in August are returning, leaves about an inch long, hiding in the weeds. Peach leaves on the new trees are an inch or so long.

2017: Spain: from Brea to Xan Xurgo a few kilometers from Santiago. The hotel is a masterpiece of charm and decoration surrounded by fields and farms. Most of the walk was through eucalyptus woods even past the airport and into the Lavacolla suburbs. Several clumps of cowslips, some spiderwort, yarrow (budding), many butterflies and songbirds, vegetation not so lush as it has been. Maples seen in flower, white seed tufts from flowering trees drifting by as we had lunch by the side of the road. Eucalyptus bark lay all along the path and throughout the forests, skin shedding like sycamores in July. (When do these begin?)

2019: I saw the first pear tree starting to flower this morning at Limestone and Phillips. Peggy’s, though, is just budding. Don’s serviceberry trees have fat buds, should come out in a day or so. I got a great number of ticks from running at Ellis over the past few days – first ticks of the year. At the far end of the pond, small mud turtles were lying out on a log. Leslie reported spicebush blossoms in the Glen.

2020: A chilly wind  throughout the day, but the first bluebell flowers have opened under the ancient mock orange bush near the shed.

And since to look at things in bloom

About the woodlands I will go

To see the cherry hung with snow.