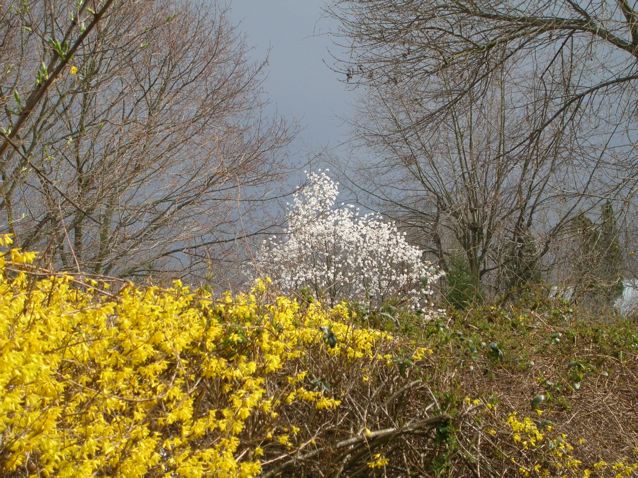 My dream world today was a sunlit April woods at sunset time, beyond which were immense misty valleys.

Rain is the rule for April’s second quarter. After the third major high-pressure system passes through, however, a brief mid- April dry spell typically occurs on the 11th and 12th, chances of precipitation falling to 25 percent. The 11th is also the brightest day in the first half of April, bringing an 80 percent chance of sun, the best chances since the 7th of March. As for temperatures, chances of highs below 50 degrees fall to less than ten percent on the 11th where they remain until they drop to five percent on April 22nd. Milder highs above 60s occur better than half the time on all the days of this quarter except on the 10th, when cooler conditions typically prevail. Frost strikes an average of 30 percent of the nights.

The grass is ready to mow most years in the second week of Middle Spring. The shaggy grass reveals that parsnips are coming into bloom and that white tailed deer are growing their new antlers. Long grass says that all the garden weeds are coming in. Tulips bloom this week of the natural year. Even commuters see them as they drive through town.

The great annual dandelion and violet flowering begins in lawns and freeway rest areas, then snakehead and morel mushrooms appear deep in the woods, the earliest spring wildflowers are at their best, May apples are shiny and tall, and giant leaves reach out from the wetland skunk cabbage.

Patches of wild geranium leaves glow with an orange tint in the sun. Forest sedum is budding. Stalks are forming on the sweet rockets. Cowslip is just opening in the wetlands. Peach trees are in bloom, along with forsythia, pears, quince, star and pink magnolias, crab apples, cherries and the last of the Cornus mas. Daffodils and grape hyacinth hold from March. Buds on the grape vines are flushed and swollen. Privets are filling out. Branches of multiflora roses are almost completely covered with foliage. Pale spikes of lizard’s tail are as long as dragonflies. Asparagus is big enough for supper. American toads are chanting, and tadpoles swim the backwaters.

Before the sun comes up, Hercules has moved to near the center of the sky. The Summer Triangle, which includes bright Vega, Altair, and Deneb, are just a little behind Hercules to his east. The Milky Way passes through the triangle, separating it from autumn’s Pegasus rising on the eastern horizon. The Corona Borealis has shifted into the western half of the heavens, and the pointers of the Big Dipper point almost exactly east-west.

1986: First asparagus pushes up in the garden. First ginkgo is leafing, first tree of heaven, ash, locust, and mulberry.

1988: Peony stems become green as they lengthen. Bleeding hearts are bushy, reach the tops of my boots. Young hummingbird moths were working the dandelions in the yard this afternoon. Purple deadnettle has turned Middle Prairie purple. Patches of white field penny cress through the fields. In the yard, all pussy willow catkins gone, daffodils a few days past their prime. Early tulips full bloom, late tulips ready. In the old leaf mulch, box elder sprouts have four leaves; in the greenhouse, one of the box elder sprouts has six leaves.

1989: Pussy willow catkins, pollen old, have dropped in the rain.

1994: Male gold finches have most of their summer color now. Sparrows have taken over the chickadee nest in the dead poplar tree.

1998: Foxglove six inches. Resurrection lilies have reached their peak, begin to become shabby. Asiatic lilies four inches, lagging behind the knotweed, which is a foot some places, other places two feet. Mid-season tulips have started along the north garden. Peas push up in the garden, the spinach has almost all sprouted. Bleeding hearts have their first red hearts. Almost all the hosta three inches (two or three plants still not up). Very first ferns show green. Woolly bear caterpillar crossed the road in front of my car this noon.  The first American toads sang by the pond last night near nine o’clock, the green toad followed an hour later, his first call of the year.

1999: By the 3rd, the star magnolias had started; now they are at their peak. Within the last five days full Middle Spring arrived. Yesterday, the pears and the fritillaria broke out overnight, and various hosta leaves emerged. Forsythia at its peak. Some apple trees opening, full bloom of the smaller cherries and plums. Leafing of quince and lilacs, full leafing of the mock orange and honeysuckle. Yesterday in the Glen, the May apples were up. Dutchman’s britches, violet cress, hepatica, anemone, early rue, first toothwort, mid-season bloodroot losing petals, the first trillium grandiflorum. Fish and frogs active in the pond the last two days, weather warm, highs in the 70s. First bat seen tonight at 7:06 p.m.

2001: Yellow and orange early tulips full bloom. Bradford pears ready to push out. Small plum bushes full bloom on Xenia Avenue. Apple trees leafing. White star magnolia flowers have come out through the day. Pink magnolia just starting to emerge in Dayton. A family of snakes has taken over our pond, swimming back and forth, searching the rocky edges; I don’t expect any toads to sing here this year.

2003: The robin chorus began just a couple of minutes before 5:00 a.m. this morning, even with the temperature at 37 degrees. Lilac budding at the corner of High and Dayton Streets.

2004: Asheville, North Carolina: Biltmore Estate: Although Asheville was at the blooming stage of southern Kentucky rather than at that of Knoxville, there were many shrubs and flowers open: helibores, early redbuds, early dogwoods, yellow-flowered hollies (Oregon Grape Holly – Mahonia aquifolium and Leatherleaf Mahonia), periwinkles, wrinkle-leafed sow thistle, Burkwood viburnum, yodogawa azalea, small-flowered white spirea, Japanese pieris with its white dredlocks, pink quince. Spicebush was budding, and oakleaf hydrangea leaves were still pale, maybe an inch long. Forsythia was common and spectacular. Some pussy willows still had their pollen. Some May apples had just emerged. Hosta leaves were over a foot long (they had just been emerging in Yellow Springs). Bellwort was unraveling, about six-inches long.  Ragwort, bluebells, white bleeding hearts, trout lilies were in full bloom. Garlic mustard was just starting to flower. Chickweed was yellowing, and Early Spring bittercress was tall and lanky. A yellow tiger swallowtail passed us as we walked.

2008: Mid-season crocuses are just about done today. Some forsythia seen in full bloom. Service berry buds are swelling, may well open this week. The star magnolias are opening near my old building in Wilberforce; star and pink magnolias are blooming in Wilmington. Daffodils, grape hyacinths and squills are full everywhere, pansies set out in yards. Robinsong at dusk.

2009: It seems that like love, spring does not rise complete or whole from space or ether, is never a priori, in spite of the feeling that it may strike suddenly and spontaneously. Instead, like love, spring is precariously dependent upon a fabric of song and odor and tactile sensation and visual angle and color and chemical surges that build one upon the other day after day until it is much too late to return to winter dormancy and expectation and solitude.

2011: The first bamboo shoots are up about an inch. Downtown, the pears and serviceberries are almost ready to open. First orange tulip opens along the south wall. At the Covered Bridge, full bloom of twinleaf, deadnettle, cowslip, bloodroot, hepatica, spring beauties, violet cress, and a whole hillside of Dutchman’s britches. Some toothwort in flower. Some toad trillium up but not blooming. Jacob’s ladder and small-flower buttercup budded. All the skunk cabbage leafing, leaves maybe to a foot or so long. Seven blue butterflies seen along the path.

2012: A bright and cool and windy Easter. Middle Spring continues to deepen into Late Spring, some maples almost completely leafed, redbuds becoming tawny, the tips of rose bushes orange with new growth, full bloom still of the violets and deadnettle and ground ivy, fading of the wild deadnettle, bittercress to seed, ferns up to my thigh now, some of Greg’s lily-of-the-valley with buds tucked way down. I work outside, and the grackles whine and cackle. From Madison, Wisconsin, my sister Maggie says that crab apples and lilacs were still in full bloom, that she had found Jack-in-the-pulpits fully formed.

2013: The first forsythia bloomed at home and in the rest of the village today, at least a week behind most past years. The upper catkins of the pussy willow developed pollen, bees visiting. Apple trees, peach trees, lilacs, privets, roses, box elders just starting to leaf. Buds of the serviceberries are straining to open, and Don’s violet windlfowers are open. Salvia up two inches in the north garden, daffodils, puschkinias, squills, grape hyacinths reaching full bloom. Allium and resurrection lily foliage is tall and fat.

2015: Red maple shedding onto the sidewalk along Dayton Street. All the privets leafing, crab apples leafing, violet windflower at Don’s, daffodils and scilla and lungwort and puschkinias and grape hyacinths completely full, phlox now pacing the peony stalks, the ground suddenly surging from the recent rain and mild weather. Mid-season crocus gone, ending the phases of Early Spring. Perennial salvia has come up in the north garden, comfrey in the Antioch garden, chickweed flowering, white and pink magnolias coming out,  pussy willows blowing down in the wind. And Casey called about 4:00 this afternoon: “I’ve got peepers!” he exclaimed. They had began a little yesterday, but today they were “going great guns!”

2016: The heliopsis has emerged (the earliest I’ve noticed it), the cherry tree has opened its first three blossoms, the viburnum seems ready to flower, and the weigela is leafing, despite the several days of very cool weather. Along Dayton Street, Don’s service berry trees have started to lose their petals, a little ahead of the pears. From Spoleto, Italy, Neysa reports that her yard is full of violet cyclamens; they began to flower a week ago.

2019: Spring moving down quickly now after a slow start. I can hardly keep up. Birdsong frantic and loud before sunup, aples shedding all over the streets and sidewalks, pussy willow catkins falling, serviceberry trees budded, crab apples on the walkways, probably, pulled off by robins or grackles, privets leafing, honeysuckle foliage rapidly turning the undergrowth green, viburnums budded, leafing, budding bluebells, daffodils and grape hyacinths in full bloom, flowering box elder trees, the first cabbage white butterfly of the year along the stream west of Ellis Pond, the first bumblebee in the north garden, six-inch hosta leaves by the apple tree, the lawn shaggy with the wild onions, first chickweed blossoms near the bee balm, robin vespers before sundown, and a  report from Leslie that she heard the first call of an American toad in her garden pond.

2020: A fierce electrical storm overnight, steady lightning and thunder, heavy rain. Warm and sun throughout the day. In the morning, deep puddles in yards throughout the neighborhood. The sweet cherry tree in the back of my house started to open this morning, the town redbud trees were suddenly red, and dandelions were blooming everywhere. Jill had one celandine flower just opening near her shed. Out at Ellis Pond this afternoon, toads were chanting in the distance. In the back yard, grackles dominated the feeders and the honeysuckles, cackling and scrawing.

All our living is regulated by the revolving seasons. They determine what we do, what we think and talk about, what we eat, the pattern of each day.