A Daybook for the Year in Yellow Springs, Ohio: The 12-Volume Set

Categories: Blog, Daybook for the Year in Yellow Springs 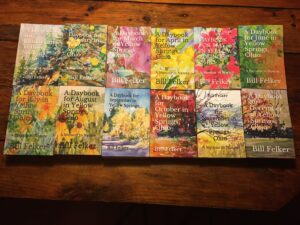 You can purchase the twelve volume set of daybooks (ordinarily $20.00 each) for a total of $129.00, postage included. Allow three weeks for delivery.

The principal habitat described in this Daybook is that of Glen Helen, a preserve of woods and glades that lies on the eastern border of the village of Yellow Springs in southwestern Ohio. At its northern edge, the Glen joins with John Bryan State Park to form a corridor about ten miles long and half a mile wide along the Little Miami River. The north section of the Glen Helen /John Bryan complex is hilly and heavily wooded, and is the best location for spring wildflowers. The southern portion, South Glen, as it is usually called, is a combination of open fields, wetlands and wooded flatlands. Here I have found many flowers and grasses of summer and fall. Together, the two Glens and John Bryan Park provide a remarkable cross section of the fauna and flora of the eastern United States.

Other habitats in the daybook journal include my yard with its several small gardens; the village of Yellow Springs itself, a town of 4,000 at the far eastern border of the Dayton suburbs; the Caesar Creek Reservoir, twenty miles south of Yellow Springs and created by the Corps of Engineers in 1976. My trips away from that environment were mainly northeast to Chicago, Madison, Wisconsin and northern Minnesota, east to Washington and New York, southeast to the Carolinas and Florida, southwest to Arkansas, Louisiana and Texas, and occasionally through the Southwest to California and the Northwest, two excursions to Belize in Central America, several to Italy and Spain.

My daily, weekly and monthly weather summaries have been distilled from over thirty years of observations. They are descriptions of the local weather history I have kept in order to track the gradual change in temperatures, precipitation and cloud cover through the year. I have also used them in order to try to identify particular characteristics of each day. They are not meant to be predictions.

Although my interest in the Yellow Springs microclimate at first seemed too narrow to be of use to those who lived outside the area, I began to modify it to meet the needs of a number of regional and national farm publications for which I started writing in the 1980s. While the summaries are based on my records in southwestern Ohio, they can be and have been used, with interpretation and interpolation, throughout the Lower Midwest, the Middle Atlantic region and the East.

In this section, I note the progress of foliage and floral changes, farm and garden practices, migration times for common birds and peak periods of insect activity. Some of these notes are second hand; I’m a sky watcher, but not an astronomer, and I rely on the government’s astronomical data and a few other references for much of my information about the stars and the Sun. I am also a complete amateur at bird watching, and most of the migration dates used in the seasonal calendar come from published sources. And even though I keep close track of the farm year, the percentages listed for planting and harvesting are interpretations of averages supplied by the state’s weekly crop reports.

At the beginning of each spring and summer month, I have included a floating calendar which lists approximate flowering times for many plants, shrubs and trees in an average Yellow Springs season. The floating chronology describes the relationship between events more than exact dates of these occurrences.

Although the flora of the eastern and central United States is hardly limited to the species mentioned here, the flowers listed are common enough to provide easily recognized landmarks for gauging the advance of the year. I found that a record of my drives south during April complemented the floating calendar and allowed me to see the approximate differences between Yellow Springs and other locations. I also learned that April in the Lower Midwest is more like March in the Southeast and more like May in the Upper Midwest. This Daybook and its Natural Calendar summaries, then, are records of moveable seasonal feasts that shift not only according to fixed geographical regions but also according to the weather in any particular year.

I have included the sunrise and sunset for Yellow Springs as a general guide to the progression of the year in this location. Even though the day’s length is almost never exactly the same from one town to the next, a minute gained or lost in Yellow Springs is often a minute lost or gained elsewhere, and the Yellow Springs numbers can be used as a simple way of watching the lengthening or shortening of the days, and, therefore, of watching the turn of the planet. For those who wish to keep track of the Sun in their own location, abundant sources are now available for this information in local and national media. Better yet, of course, a person might actually keep track of when the Sun rises and sets near his or her home!

Local average temperatures are also part of each day’s entry. Temperatures in Yellow Springs generally keep pace with temperatures in the Lower Midwest and Middle Atlantic region, and they can be helpful indicators of the steady progress of the year in those areas.

The journal entries in the Daybook section provide the raw material from which I wrote the Natural Calendar digests. When I began to take notes about the world around me, I found that there were few descriptions of actual events in nature available for southwestern Ohio. There was no roadmap for the course of the year. My daily observations, as narrow and incomplete as they were, were especially significant to me since I had found no other narrative of the days, no other depiction of what was actually occurring around me. In time, the world came into focus with each particle I named. I saw concretely that time and space were the sum of their parts.

As my notes for each day accumulated, I could see the wide variation of events that occurred from year to year; at the same time, I saw a unity in this syncopation from which I could identify numerous sub-seasons and with which I could understand better the kind of habitat in which I was living and, consequently, myself. When I paged through the journal entries for each day, I was drawn back to the space in which they were made. I browsed and imagined, returned to the journey.

The passages from ancient and modern writers that accompany each day’s notations are lessons from my readings, as well as from distant seminary and university training, here put to work in service of the reconstruction of my sense of time and space. They are a collection of reminders, hopes, and promises for me that I find implicit in the seasons. They have also become a kind of a cosmological scrapbook for me and the philosophical underpinning of this narrative.

Many friends, acquaintances and family members have contributed their observations to the Daybook, and their participation has taught me that my private seasons are also community seasons, and that all of our experiences together help to lay the foundation for a rich, local consciousness of natural history.