HOME IS THE PRIME MERIDIAN 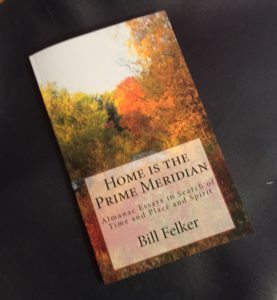 Price: $17.00 Includes Priority Shipping when ordered with PayPal, VISA or Master Card. If you order two copies of Home is the Prime Meridian at the $17.00 price each ($34.00 total), you will receive an additional copy (or, at your request) a copy of Poor Will’s Almanack for 2018 at no charge.

A Review of Home is the Prime Meridian by the OnlineBookClub.org

Home is the Prime Meridian: Almanac Essays in Search of Time and Place and Spirit by Bill Felker is a collection of non-fiction essays set in Yellow Springs, Ohio. The essays vary in length from one to four pages. As the title suggests, the essays focus on three topics: time, place and spirit. Told in sequence, these essays follow the seasons one experiences in a year: winter, spring, summer and fall.

‪Home is the Prime Meridian is a literary lover’s delicacy. The author utilizes masterful control over language to touch upon all five senses. Felker further adds an emotional element to his writing to create a strong connection between the reader and the enchanting setting in which these essays take place. The tone throughout the collection is impassioned, sometimes nostalgic, and at other times, hopeful, but each essay is imbued with the same sincerity and reverence for nature. The writing is crisp, and the author’s word choices are eloquent, making one want to read, reread and reread again the short essays compiled in this collection.

‪The book is a collection of essays, but I think the author’s work would better be categorized as poetic, story-telling non-fiction. His way with words clearly sets the scene for the reader and transports one to the exact time and place being written about. Although I have never been to Yellow Springs, Ohio, I could taste the harshness of the cold winter months; I could see the emerging color in the spring; I could hear the tranquil summer days, and I could feel the loss brought by autumn. Instead of feeling like an observer looking in on the author’s memories, I felt as if I was in a trance, imagining and remembering the very things described in each essay.

‪There are forty-two essays in this collection, and each one stood out as a unique and equally intriguing work of art. Many times, collections like this can feel repetitive or become tedious to read due to similar writing and use of the same literary devices over and over again. However, that is not the case with Home is the Prime Meridian. Each essay is thought provoking in its own way: some essays are lighthearted and easily decipherable, others are more obscure and require interpretation. However, I found each essay was as enjoyable as the next, and none failed to capture my attention. Further, whether we are reading about plants, animals, constellations or landscapes, each poem is somewhat introspective and all revolve around so much more than just the natural elements we think we are reading about. Loss, aging, spirituality, change, mortality, and the perpetual cycle of life are just some of the themes touched upon in Felker’s essays.

‪I devoured these essays one by one. Each time I thought I had found my favorite essay, another came along and impressed me even more. “Wow” was my reaction to the author’s words over and over again. The layers of meaning behind the short, sometimes simple words had me in awe of this writer’s ability to mold language and evoke emotions long buried in my mind. This is a collection I will cherish and return to frequently. I strongly urge lovers of nature, earth and the naturalistic to read this collection. I have never felt so strongly about a collection of essays; Home is the Prime Meridian is truly a treat for the senses and a writer’s delight. In my mind, this book deserves far more than four stars, but as that is the highest award I can give, I rate Home is the Prime Meridian a strong 4 out of 4 stars.

Search for Bill Felker on www.amazon.com

“A brief, intense, and entirely enjoyable tour of nature.”

“When I go too far out, I need to gather my landmarks of home around me,” writes radio broadcaster and veteran almanac author Felker (Poor Will’s Almanac for 2018, 2017, etc.) in his short, aphoristic new work of reflections on nature. “Distant locations only make sense against my local gauge.” The more he understands where he is, he tells his readers, the more he understands himself. Consequently, he lavishes extraordinary care and attention on his small plot of field and woodland in Yellow Springs in southwestern Ohio, often characterizing the locus of home as the “prime meridian” in even the most far-ranging voyages.

In the long tradition of nature diaries, he anchors dozens of short pieces on explorations of the seasons of the year, the moods of the weather, and, most of all, the characters and behaviors of all the animals he spots, particularly birds. Several of the architects of this kind of writing, from Ralph Waldo Emerson to John Burroughs, are quoted or paraphrased with obvious affection, and Felker’s animal portraits are warmly enhanced by what he freely admits is a liberal amount of anthropomorphizing. His birds and woodland creatures are often as metaphorical as they are material. He’s a careful and meticulous observer who nevertheless seldom falls into the trap reserved for scrupulous spectators: being tedious. He’s saved from this because he commands a light-footed prose style and he keeps his vignettes very brief.

Felker has been crafting these almanac-style entries for many years, and his experience shows not only in the smoothness and economy of his storytelling, but also in the winning combination of humility and poetic insights he’s clearly mastered. He’s delightful company on the page, in everything from his subtle, sensory-heavy evocations of the seasons (winter being a specialty) to his accounts of the stars and his lush descriptions of the natural world’s various inhabitants, captured even in a quick list of the region’s bird life: “The sparrows, like starlings, staying tight to the motions of the flock; the acrobatic chickadees swooping in and out, remaining only seconds to grasp their sunflower seed and fly off; the wary, fluttering titmice; the blue jays, harsh and bullying; the hopping, syncopated nuthatches exploring upside down.” These passages are often layered with musings about the author’s moods—the immediate and sometimes-odd ways his feelings intersect with the flora and fauna he stumbles on (one of the book’s closing scenes, involving a group of pantry-raiding mice, is an especially touching example).

The tone throughout remains highly personal, almost confessional, which often adds to the charm of the work. The author’s knowledge of the plants and animals in his realm is encyclopedic but never comes across as pedantic, and the resulting almanac is a tightly focused and wonderfully executed example of small-bore nature writing.

Home is the Prime Meridian: A Description

Bill Felker’s HOME IS THE PRIME MERIDIAN: ALMANAC ESSAYS ON TIME AND PLACE AND SPIRIT is a collection of forty-one brief essays taken from the nature column and almanac he has written for regional and national publications since 1984.

The essays that focus on seasonal time blend the author’s observations of events in nature with his reflections on change and passage. For example, in “Checking for Spring,” he counts the kinds of buds on the trees and bushes that surround his yard, feeling reassured by their number and promise. In “The Archipelago of Early Spring,” he describes the landscape of early spring in and around his village, finding a topography of flowers that embodies the advance of the year. He uses synecdoche in “Strawberry Summer” to link parallel seasons of blossoms to the strawberries of June. In “Autumn Samadhi,” he names an accumulation of loss, “counting what no longer holds,” and making “an inventory of emptiness, cued only by memory and the more durable, woody scaffolding that binds the seasons.”

Felker’s selections about his sense of place explore his relationship with the local seasons, with his house, with his town and its surrounding parkland. “My home in Yellow Springs is a private observatory,” he says in “Homely Gnomons.” And tracking and marking the movement of the Sun on the walls of his rooms, he makes a map of his personal history, “with souvenirs following the shadows.” In “Merak and Dubhe,”he describes how he uses the flora of his neighborhood to track the progress of the year in other locations. “The Pond” is a meditation on aging and dreams of youth. In the pond near his house, Felker says, “the horizon was not the globe’s round, aloof, ever receding promise. This world was flat. This horizon was accessible, touchable. My reach for once did not exceed its grasp. I gave in to the attainable sea, its borders as fixed and finite as my own.” The final essay of the collection explains how his home is the point from which his entire life is measured. Home, like a spiritual Greenwich point, is the Prime Meridian.

The seasons, the fauna and flora are all parts of Felker’s personal odyssey. In “Camel Crickets in the Tub,” he compares the crickets’ apparent lack of common sense with his own. In “Watching Romuald,” a frog helps him to understand meditation. In “The Visitor,” a yellow-bellied sapsucker teaches him how to fight depression. He goes to confession to rodents in “Mice in a Mug.” He relives a humiliation in his childhood and learns its meaning in “Talking Mosquito.” He thinks about free will in the context of spring in “The Sweetest Way.” He longs for a benign God in “A Community of Koi in Winter.” He muses about mortality and the rebirth of nature in spring with the essay, “In Suspense.” He writes: “I wonder about the seasons and the meaning of the seasons of the landscape because I am wondering about my own seasons and what they mean. I watch them, and I am in suspense because I don’t know exactly how they will turn out.”

Throughout this collection, Felker explores place in nature within a context of observation and spiritual reflection. In HOME IS THE PRIME MERIDIAN, the sky, the land, plants and animals are touchstones for identity and meaning.