A DAYBOOK FOR APRIL IN YELLOW SPRINGS, OHIO

Category: Daybook for the Year in Yellow Springs

A DAYBOOK FOR APRIL IN YELLOW SPRINGS, OHIO

A Memoir in Nature and a Handbook for the Month of April, Being a Personal Narrative and Synthesis of Common Events in Nature between 1981 and 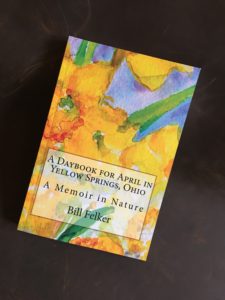 2017 in Southwestern Ohio, with a Variety of Natural Calendars, Reflections by the Author and Seasonal Quotations from Ancient and Modern Writers.

Available from www.Amazon.com for $15.00 Prime, or autographed copies are available through the Almanack Store of this website for $20.00 (Priority shipping included)

This fourth volume of A DAYBOOK FOR THE YEAR IN YELLOW SPRINGS, OHIO, is memoir, extended meditation and guidebook to the month of April in southwestern Ohio – as well as in the Middle Atlantic region and much of the East and Southeast.

The principal habitat described here is that of Glen Helen, a preserve of woods and glades that forms the eastern border of the village of Yellow Springs in southwestern Ohio.

The passages from ancient and modern writers ( which accompany each day’s notations are lessons from my readings, as well as from distant seminary and university training, here put to work in service of the reconstruction of my sense of time and space. They are a collection of reminders, hopes and promises for me that I find implicit in the seasons. They have also become a kind of a cosmological scrapbook for me, as well as the philosophical underpinning of this narrative.

I have included the sunrise and sunset for Yellow Springs as a general guide to the progression of the year in this location, but those statistics also reflect trends that are world wide.

My daily, weekly and monthly weather summaries have been distilled from over thirty years of observations, and they offer a statistical description of each day. Although information about the Yellow Springs microclimate at first seemed too narrow to be of use to those who lived outside my area, I found that I could adjust my data to meet the needs of a number of regional and national farm publications for which I started writing in the mid 1980s. Soon I was finding that what had happened in Yellow Springs was applicable to many other parts of the country.

The Natural Calendar sections of this DAYBOOK include approximate dates for astronomical events such as star movement, meteor showers, solstice, equinox, perihelion (the sun’s position closest to earth) and aphelion (the sun’s position farthest from earth). In this section also I note the progress of foliage and floral changes, farm and garden practices, migration times for common birds and peak periods of insect activity.

At the beginning of this volume, I have included a floating calendar that lists average blooming dates for wildflowers that blossom between April and June in an average Yellow Springs season. Although the flora of the eastern and central United States is hardly limited to the species mentioned here, the flowers listed are common enough to provide easily recognized landmarks for gauging the advance of the year in most areas east of the Mississippi.

The DAYBOOK journal itself consists of my notes on what I saw happening around me in Yellow Springs between 1979 and 2017. It is a collection of observations made in my yard, from the window of my car and from my walks in Glen Helen, in other parks and wildlife areas within a few miles of my home, and on occasional trips.

The cumulative format of the DAYBOOK, which brings together all of the annual entries for the same day through the span of over thirty years, has shown me the regularity of the changes in the seasons, and it fleshes out a broad, multi-faceted picture of each segment of the year. This daily record and the natural calendar summaries, then, are records of moveable seasonal feasts that shift not only according to geographical regions but also according to the weather in any particular year. They are a phenological handbook and guidebook for the days. In addition, they can be used as an informal base line for monitoring future changes in local climate.