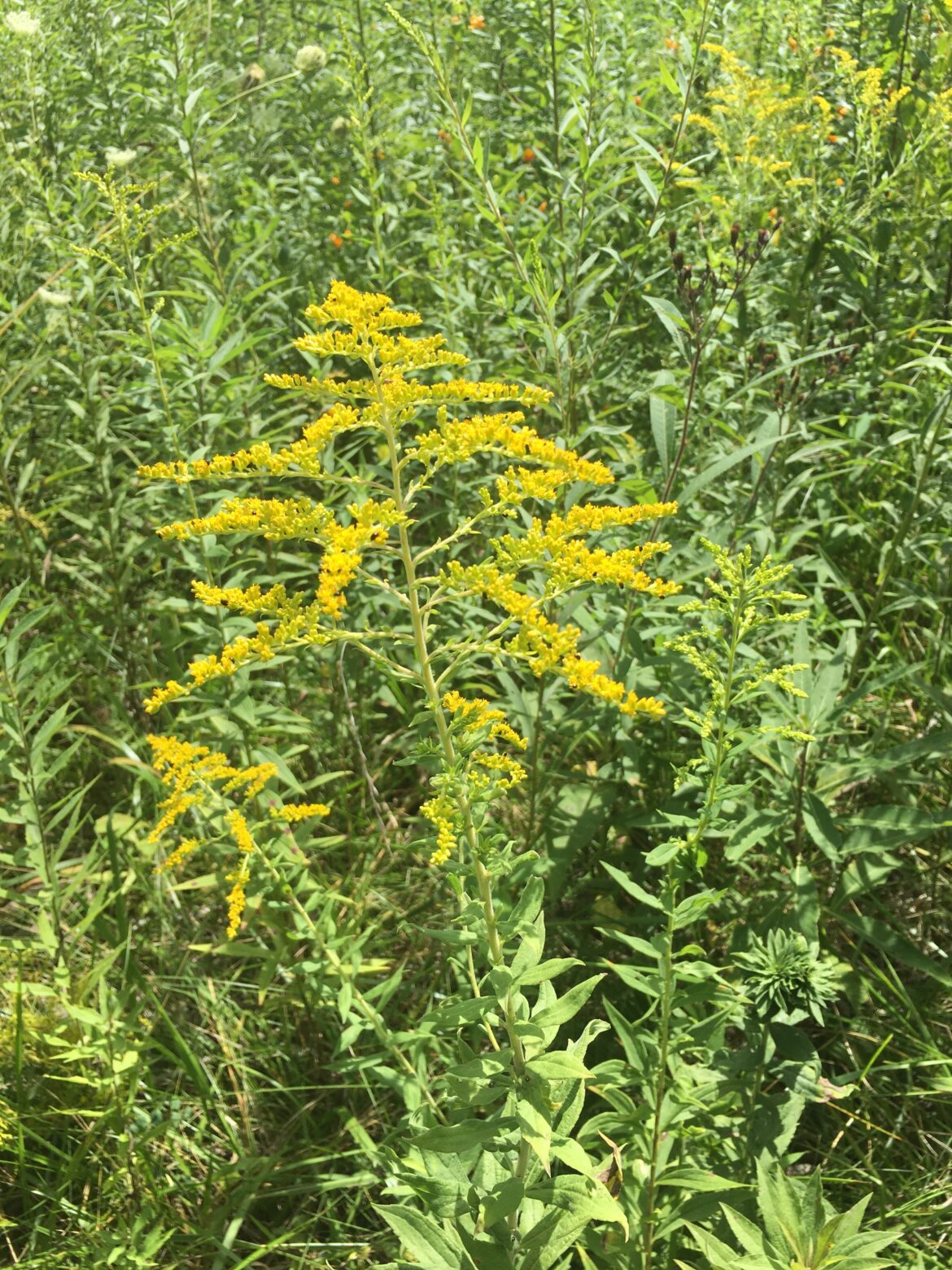 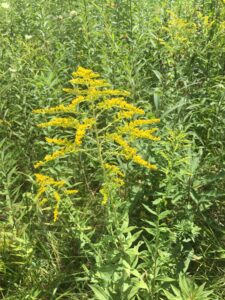 How rich in color, before the big show of the tree foliage has commenced, our roadsides are in places in early autumn, — rich to the eye that goes hurriedly by and does not look too closely, — with the profusion of goldenrod and blue and purple asters dashed in upon here and there with the crimson leaves of the dwarf sumac.

Odds for rain are higher today (40 percent chance) than at any time in the first third of September. Still, the sun comes out 90 percent of the days; and highs reach 90 ten percent of the afternoons, reach 80 on 35 percent, and 70 on 55 percent. Frost is quite unlikely through the 12th, but nighttime lows drop below 60 one night in two.

The landmarks of August continue to disappear. In warm years, the late trefoils and wild cucumbers are already gone. Burdock and ragweed are decaying. Joe Pye weed has lost its color. Boneset is past its prime. Japanese knotweed blossoms darken and fall. Field thistles go to seed. The blooms of the giant yellow hyssop have wilted. The great flowers of the American lotus disappear. Resurrection lilies have collapsed, and coneflowers are in full retreat.

After the sky becomes dark, Delphinus, the Dolphin swims due south. Above it, near the North Star, Cepheus is between Cassiopeia (to the east) and Draco (to the west). Just below the southeastern corner of Cepheus, the star cluster of Lacerta lies in the Milky Way. The Big Dipper is low in the north, and the Milky Way dominates the night, Cygnus, Lyra, and Aquila, the constellations of the Summer Triangle, forming its brightest stars. At dawn, Orion stands in the middle of the southern sky; bright Capella shines high above him. Regulus, the spring planting star, approaches from the east in Leo.

1988: When the woolly-bear caterpillars finally showed up this year, they were dark, some reddish, others black or brown. Last year’s winter a mild, dry one after a September of lightly colored caterpillars. At South Glen, only a few tall bellflowers left.

1989: Light morning rain, robins clucking, crickets strong. A squirrel that lives in the back trees started its autumn calls at 8:00. Along the shore of Caesar Creek, the trees still not turning. Locusts have browned, but the shoreline is green. Arrowhead has gone to seed, big heads the size of acorns. American lotus mostly gone. Beggarticks, large and small, are in full bloom along the beaches and on log habitats. On the way south to the lake, fields and waysides full of bright helianthus. Peaches have all fallen in the yard. The blue Asiatic dayflowers are growing weaker.

1991: Geese fly over the house honking at 8:05 this morning. At the Covered Bridge, a whole field of wingstem is done flowering. Asters and goldenrod full. Heavy odor of September, spice of seeds and decaying foliage. Gray stalks of garlic mustard and summer brome scattered, tipped like straw from the wind. River down lower than even in the drought of 1988, bottom visible all along the path. Swamp beggarticks and orange jewelweed full. Three-seeded mercury is reddening. Sedum reappears in the undergrowth, stalky from the canopied summer. Empty buckeye hulls along the trail. Locust pods common. Some ash and cottonwoods have lost nearly all their leaves. Elm and sycamore leaves on the low pebble shoreline at Far Hole. Dozens of fruits down under one Osage. Purple deadnettle sprouting, new sweet Cicely. Crickets loud. I walk through showers of ash leaves. Blue jays restless, noisy all the way from the bridge to Jacoby, apparently migrating. Caught in the rain, I crossed the river at the shallows north of the canoe launch, holed up at the Jacoby outhouse, and then set out again back through the showers of rain and acorns and buckeye hulls and leaves.

1993: Geese fly over at 6:30 a.m. Tall coneflowers noticed almost done at the corner of High and Limestone.

1995: Walking Buttercup down Limestone Street at dusk, Jeanie and I saw two or three dozen robins feeding, calling, flying back and forth in the long yard next to McKee’s. The full autumn flocking has begun.

1996: The asters planted from seed in the spring have passed their best now, but they’ve brought pinks, whites and violets to the south garden since August.

1997: Cloudy rainy morning, temperature in the low 60s. No bird song, only crickets.

1998: Sparrows chattering this morning early in the pear trees downtown. The mother-in-law’s tongue is full bloom in the greenhouse.

1999: Along the bike path, the jewelweed is wilting from drought. Ragweed is dry and empty, leaves crackle underneath my wheels. The canopy is thinning overhead. Ironweed is finished in the yard. In the Caribbean, Hurricane Floyd moves towards the East Coast as the hurricane season reaches its center.

2000: Half the leaves gone from our front maple, the most precocious of the High Street trees.

2001: At 5:35 this morning, a single repeated call, probably from a blue jay. Then at 5:40, full jay vocalizations. No other birds until a cardinal sang close to 6:00, then more jays. Then silence, then clucking and chattering from a squirrel and maybe starlings. No doves heard today.

2005: To South Glen with Mike: The woods is wearing out. More than half of the wingstem has completed its cycle, ironweed far less common. Under the canopy, the rich green glades of wood nettle are losing their color. Zigzag goldenrod is now open, tall goldenrod reaching early full bloom. Wild cucumber has large fruits. One pileated woodpecker heard, small flock of gold finches seen.

2006: Bittersweet berries are definitely orange (very pale orange) today. One of Mateo’s Jerusalem artichokes has finally budded. A few tall coneflowers continue to bloom in the alley. Lilac pods are dark, redbud seeds drying, browning. A quiet morning at the back porch, fewer butterflies. One cardinal at 6:00 a.m. .

2007: After last night’s rain, the garden looks especially tattered, some of the hosta leaves yellowing, complementing the mottled coleus. The buds are bigger on the Jerusalem artichokes; they should bloom any day. The last of the phlox are gone, but the clump of false boneset that I cut back in July is reaching full flower and provides a solid, fresh accent to the fading plants of middle summer. My winter greenhouse tomatoes (the Cobra variety) I seeded at the end of July are about three feet tall now, and one plant is blossoming.

2008: Rain last night, at least an inch. I almost stepped on a small toad, a little more than an inch long, out by the woodshed. Ben, the reporter who interviewed me last month sent me the name of a milkweed beetle watcher who has been seeing beetles every year for the past 30 years but said the insects were two weeks late this year. In the back yard, no bright yellow finches seen for two or three days. Have the males left or changed color? Hurricane Ike batters Cuba, heads out into the Gulf.

2010: Only crows again this morning. (As I drove home from buying muffins, I swerved to avoid a crow in the street. It was pecking at what I thought was road kill, but when I got close and the crow flew off, a young bird it had been holding flew off too.) In the countryside, corn and soybean fields are a golden brown, fencerows reddening with poison ivy and Virginia creeper. One large flock of starlings swirling down into a pasture. At the butterfly bushes, two monarchs, one spicebush swallowtail and one female tiger swallowtail seen over the lunch hour – but no swallowtails seen in the morning. Skippers are still about, but fewer than last week.

2011: Goshen, Indiana: Field crickets and monarchs on my walk this afternoon.

2013: Peggy’s New England asters have started to open now. Mine are just showing purple on their buds. Peaches gone except for a handful. In the alley, the bittersweet berries are getting a little dusky, and the knotweed is in full flower. A few pale violet spiderworts are blooming beneath the peach tree. More maple leaves falling on the Lawsons’ lawn. Maples with patches of color on the way to Dayton.

2014: Cool and foggy morning, patches of gossamer in the grass, orb-weaver webs empty, a sluggish scorpion fly, a painted lady (Cynthia), wings spread, warming on the stones at the edge of the garden.

2015: When I went out to the car this morning, I found a huge orb weaver waiting for me, its web strung between my windshield and the bushes beside it. The pond had a long-bodied orb weaver over it. The heat wave breaking. More monarchs in the garden. Jerusalem artichokes, white snakeroot, goldenrod all early full in the roadsides and at Bryant Park. Throughout the countryside, leafturn clearly underway, some soybean fields yellowing, some cornfields fully dry and dark. In the north garden, a few New England asters have opened.

2016: In the rain tonight, two quince fruits struck the tin room above the bedroom, sounded like rocks thrown hard against the surface. Soybean fields south of town suddenly turning. I saw a sizeable flock of Canadian geese feeding in the vacant lots at the west edge of town this afternoon, and a honking flock flew over the house in the dark around 7:30 this evening. At the gym, Rick told me about seeing fireflies a few nights ago, like a resurgence or late-summer hatch, congruent with what I saw at John and Louise’s house a week ago.

2019: Sunny and warm, only a few cabbage whites seen in the garden, one spicebush swallowtail at Ellis Pond. The New England asters are showing purple at the center of their buds. Katydids heard at 7:23. Leslie and Mark report a huge flock of grackles visited their yard, then flew off.

2020: Jeni called and sent photos from Portland: The night sky is red from the uncontrolled wildfires fires south of her, and the morning sky is dusky gray with smoke. The town about an hour away where she worked a few years ago has been evacuated, and her favorite restaurant there was destroyed. The entire west coast is besieged by fire storms. Here at Keuka Lake, light rain and a cold front approaching: screech owl conversations after sundown, just like two nights ago.

But on the hill the golden-rod, and the aster in the wood,

And the yellow sunflower by the brook in autumn beauty stood…