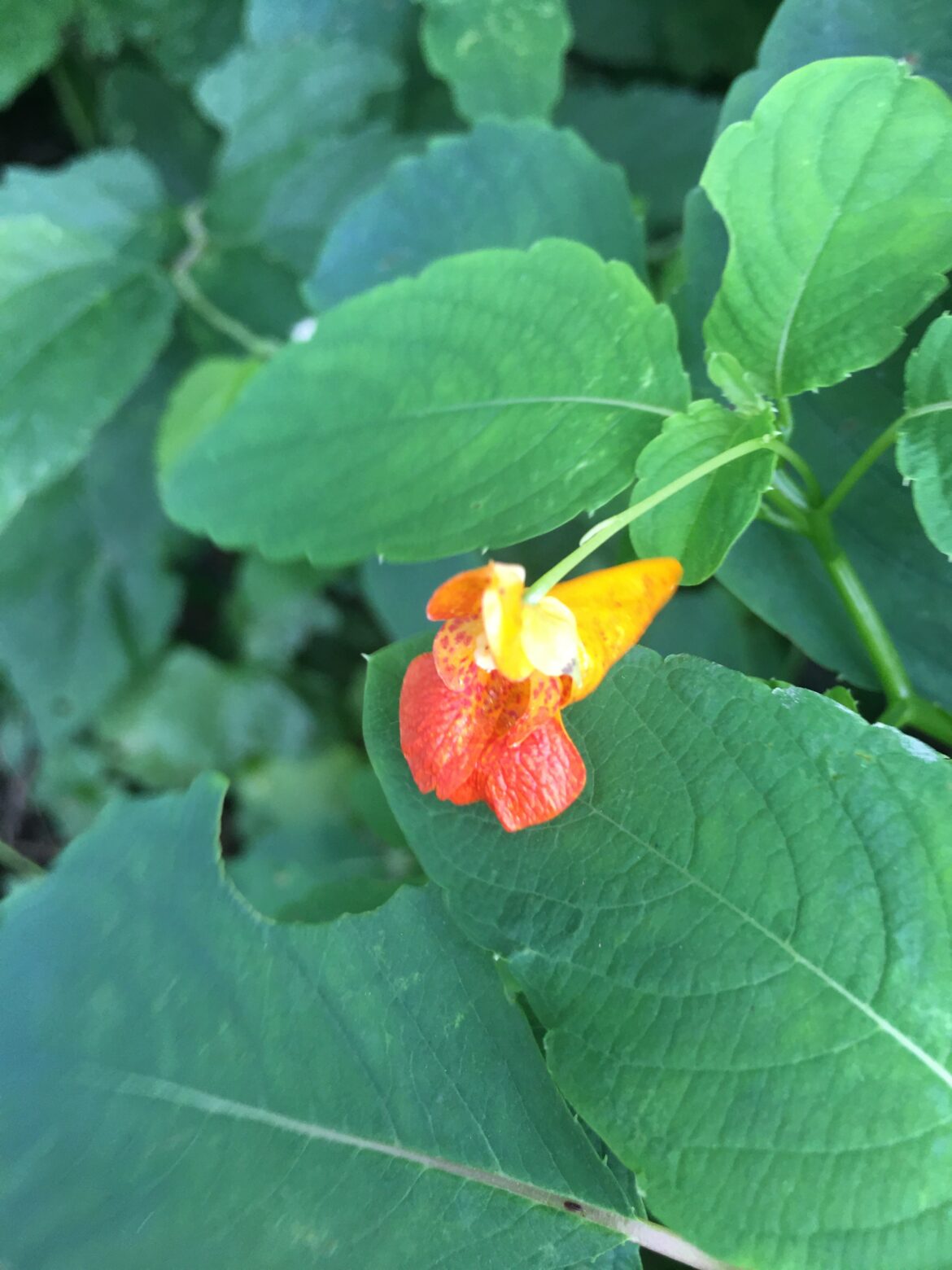 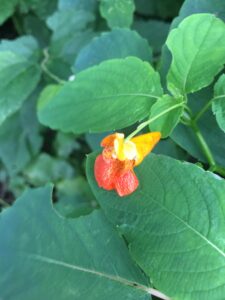 Now comes the time of rich purple in the fields and meadows, denoting not only a time but also a maturity. It is as though the whole Summer had been building toward this deep, strong color to match the gold of late sunlight and early goldenrod.

The day’s length shortens more quickly as August progresses. At solstice, the night was around nine hours in length along the 40th Parallel. By today, after six weeks of Deep Summer, the night has grown to ten hours. Now, it takes a little more than three weeks to grow by another hour. At this point in the solar year, sheep and goat owners may begin to see signs of estrus in their ewes and does.

1986: Geese flew over at 6:30 a.m. and 6:30 p.m. The first patch of yellow appeared on the big maple in the yard. Tree of heaven fading. Clearweed noticed blooming. A few fireflies seen tonight.

1988: Fireflies, delayed by the drought, have actually increased tonight over a month ago.

1993: The last daylily opened this morning. Blue vervain on the Miller’s land was just starting its climb to autumn.

1996: Cottonwoods becoming pale yellow at a number of locations in the area. At the mill habitat, black walnut, sumac, wild grape, sycamore, elm, box elder, and redbud are also turning yellow along the river. One Virginia creeper on a fallen log was red. This morning, I saw a shower of yellow leaves fall into the garden, box elders. Coming home from downtown, we watched the wren in the front maple scolding Jerome, the cat.

1998: The maple in front of our house has started to turn now, one of the earliest of the local Judas trees. Many cottonwoods are blanching quickly. Along the highways, sundrops, ironweed, false boneset, wingstem are in full bloom. Katydids started at 8:02 p.m. along Jacoby road as Jeanie and I were walking back from the river.

1999: Brief robin song this morning around eight o’clock, for just a minute or so, then silence. A half an hour later, a huge gray toad appeared at the pond, skin hanging around her flanks as though she had just lost half her weight.

2000: Crickets when I got up this morning: a single shrill call, unwavering. Cardinal at 5:11, several of them sang until almost 6:00. Cloudy, humid and windless morning. Pink and white phlox, heliopsis declining. Mallow almost all gone. Purple loosestrife just about done. Showy coneflowers are in the middle of their season, all in bloom, none fading. When the sky grew dark and a storm moved in, a blue jay in the back yard gave warning with its bell call, maybe a dozen cries before the wind struck.

2001: Cardinal at 5:09 a.m., crows at 5:21, blue jay then a squirrel at 5:25. A warm quiet morning, moon three quarters full, predawn sky dusky blue, Jupiter starting to move up and away from Venus in the east, ending conjunction.

2006: Katydids had become silent when I got up this morning at about 1:00. No sound either at about 3:30 or at 4:30. A few isolated “katy-dids” just before a cardinal sang at 4:56. Skunk odor drifting over from Stafford Street about 5:30. In the alley, lilac seeds elongating. All of Mrs. Timberlake’s phlox and lilies are gone. Jeanie and I sat on the porch about 7:15, the weather cloudy and cool. Male and female hummingbirds came to the feeder, but no butterflies in the yard. No cicadas because of the clouds and temperature, only a few cardinal calls. Only one lily is left blooming in the yard, a red-orange. In the pond, arrowhead has started to bloom.

2010: Faint robinsong, loud crickets at 4:40. One cardinal at 4:45, then quiet until about 5:00. Tiger swallowtails and monarchs continue – and later today, a silvery zebra swallowtail, a fritillary and two Eastern Black Swallowtails. Tat said last night that the monarchs in Madison had been abundant this summer. I noticed a patch of gold forming on the front ash tree; a large branch of the white mulberry has bright yellow leaves. Across the street, Lil’s burning bush has blushed across the top.

2012: Robins and cardinals singing when I checked at 5:15 this morning. A small skunk appeared out of the darkness to run across our back porch about 5:30. Late-season hostas in bloom at Moya’s and along the west border of the yard. Shasta daisies almost gone here, stronger at Liz’s garden. Phlox holding. Goldenrod is fully headed at the Danielsons’, but not as far advanced as I would have thought with all the heat. Two tiger swallowtails at one time this afternoon in the butterfly bush, and occasional spicebush swallowtails.

2013: Two pale yellow re-bloomer lilies in the circle garden. Other lilies – mostly orange tiger lilies – still flowering in the village. Phlox past the height of their bloom. Some roses, but the lack of fertilizer and late trimming pretty much ended their season after the first wave of blooms. Butterfly bushes hold. Shasta daisies still strong. Tiger swallowtails, male and female, along with a giant swallowtail visited the flowers today. As I walked to the east gate, I was surprised to see that one of our resurrection lilies was in the bloom. (They had not flowered in years.) Properly situated, those pale violet lilies follow closely after the disappearance of standard lilies.

2014: Five lilies in bloom (counting the naked lady and the last stargazer). One monarch seen in the north garden zinnias at about 10:00 a.m. Another in the afternoon.

2015: This morning, I was there for the first cardinal song, 4:49. In the middle of the cricket symphony: the soft chirping of the field crickets, the intermittent trill of the tree crickets (the whistling crickets), the static of the thrips.

2017: A hackberry brown enjoying a fallen peach this morning, feeding, flitting, settling back to feed some more. More fold-wing skippers and cabbage whites in randori. One small black swallowtail in the zinnias this afternoon. At Ellis Pond, the bullfrog is still calls at sundown.

2018: Eight cabbage whites clustering around the jumpseed clump, one monarch, one tiger swallowtail in the zinnias in the morning, two monarchs together in the afternoon, two question marks, several silver-spotted skippers. The first goldenrod seen in bloom near Wright Street. Yellowing hackberry leaves continue to fall, a major early leaf shedding. The description of the daisies and coneflowers and naked ladies from 2016 fits today perfectly. Katydids a little before 8:00 this evening.,

2019: The adult wren continues to call. A fledgling on one of the feeders calls with a slightly broken “chr-rr.” The first Royal Standard hosta blossom opened in the night. No more day lilies or ditch lilies. Six resurrection lilies have fifteen flowers in all. Milkweed bugs have hatched on the milkweed pods. From Madison, Wisconsin, Maggie sends a photo of eight monarch caterpillars in her garden. At home, red aphids cover the heliopsis (which I cut back this morning).

2020: To Lake Hope in eastern Ohio: Joe Pye weed common throughout the hills; short goldenrod, Queen Anne’s lace and blue chicory in full bloom along the narrow roads; water lilies – pink and white – still flowering, although the foliage is browning. Jewel weed coming in near the water.

The earth is good, and the changing seasons are a joy.