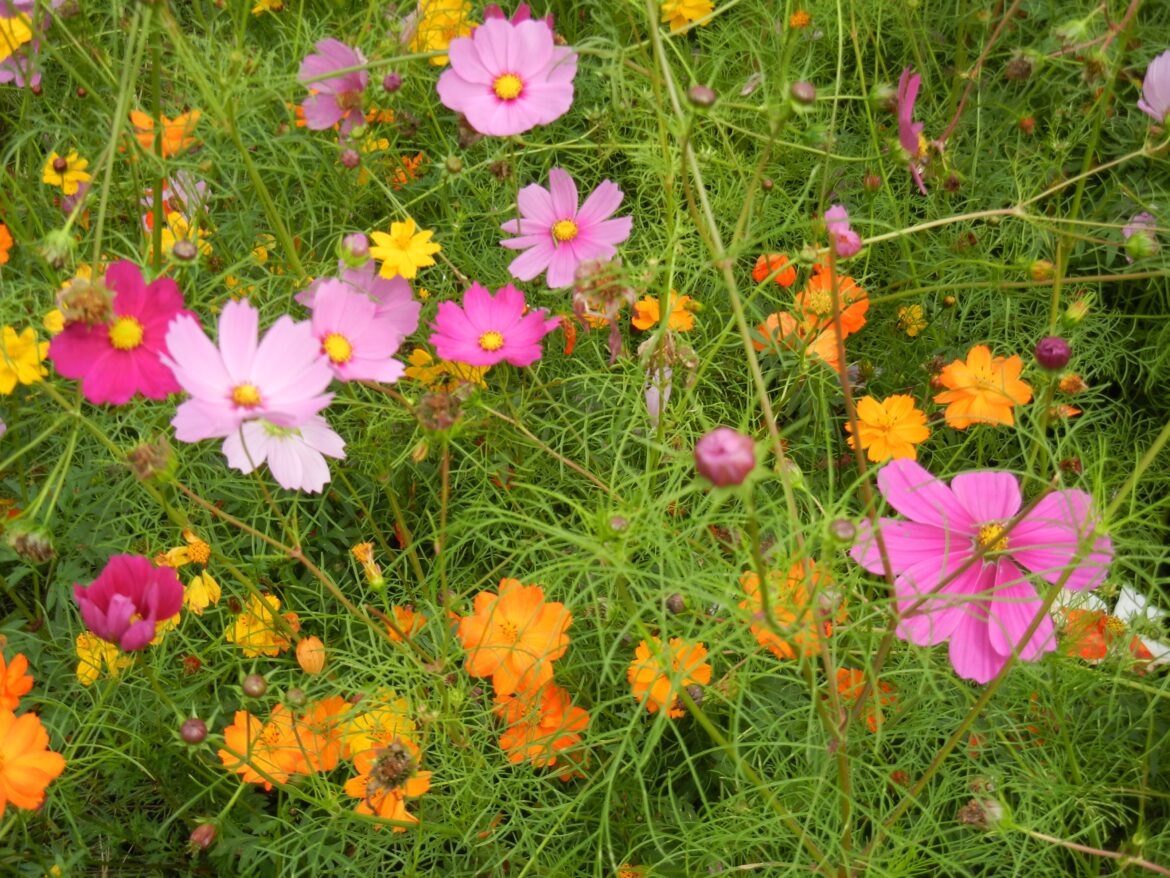 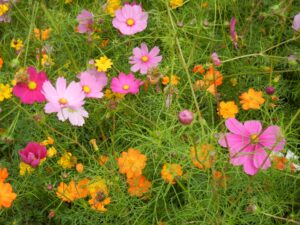 The base of the leaf was yellowish green, but along the sides and tip it was tinted with peach and rose – and this was only the end of August.. I tucked the lone leaf carefully into my wallet. It would remind me to be aware while summer was slipping away.

The lowering sun accelerates its message to the monarchs and swallowtails, to the fall webworms and to the Hickory Horned Devils (the caterpillars of the Citheronia regalis moth). It is high Late Summer: Beds of false boneset and trellises of virgin’s bower break into bloom. Tall blue bellflower and burdock and euonymus keep their blossoms, and fields glow with seven-foot wingstem, tall coneflowers, early purple ironweed, late bouncing bets and black-eyed Susans. The autumn crop of raspberries darkens.

The latest flowers of the season are getting set to open. Bur marigolds, zigzag goldenrod, tall goldenrod, Jerusalem artichokes, broad-leafed swamp goldenrod and small-flowered asters are budding. Plums and grapes and elderberries sweeten. Insects still are everywhere. Cicadas and katydids and crickets are still loud. Fold-wing skippers still chase each other in the morning sun.

The very first of the black walnut leaf turn and leafdrop began in the middle of Leo, and now the walnut trees are quickly yellowing. Yards and paths fill with their leaves. Sometimes the black walnut trees are completely bare by the first days of September. The horse chestnuts follow, then the cottonwoods, then box elders. Judas maples, betraying the messiah of June with red and orange, foretell October.

Yellow jackets come to feed in the fallen fruit (and build new nests in the ground), and great colonies of ants often begin migration. Murmurations of starlings sweep over the fields, and long flocks of grackles and blackbirds follow the harvest. Robins congregate in the woodlots, gathering for migration. Peaches, blackberries, second-crop raspberries, plums and elderberries sweeten, then close their seasons. Hickory nuts, buckeyes and pecans fall to earth.

1982: Some leaves are turning on our northeast maple. Throughout town, a few sumac, box elder, elms and sycamores have shades of yellow and brown. Field thistles are blooming along King Street.

1992: Sunday morning, barometer steady at 30.34, temperature 66 degrees, humidity 55 percent, sky mostly overcast, scattered fog: I ride down the new bike path toward Goes Station. On both sides of the right-of-way, protected from cutting by steep banks and ditches: intermittent pasture habitats, roadside habitats, wetland habitats, woodland habitats. The corridor opens a cross-section of the county flora, reveals the pace and the character of the season.

Some things are late this cool year. July’s horseweed is just opening. White snakeroot is way behind its usual timetable. Yellow wingstem and primrose, which provide most of the gold to my ride, are still fresh and strong. Purple ironweed, with the brightest corymbs of the trip, is at its peak. Tall bellflowers, a consistent violet blue from Yellow Springs south to the Little Miami bridge, are holding as though it still were Deep Summer. Goldenrod, often blooming by the 13th, looks to be a week or ten days from flowering.

And signs of fall: patches of sycamore leaves and wild

1993: No birds singing before dawn. Katydids quiet in the very early morning, and then one heard at 4:45 for a few minutes, then only crickets. Monarchs have been common for the past week, and two even flew in front of the car yesterday when I was driving home from school. Swallowtails have been increasing in numbers throughout August.

1999: Hurricane season is in full swing now, the last week creating three. One went across Texas south into Mexico. The others are moving towards the East Coast.

2001: Skunk odor under the house this morning, following a week of sightings and smells. Katydids still heard at 3:00 a.m., silence soon afterwards. Whistling crickets, making a sound like a dull, long police whistle, were the most prominent singers. Chirping field crickets were calling off and on at 5:00 a.m. First cardinal at 5:55.

2003: Cardinal at 5:15 a.m., continuing on and off until close to 6:00. Doves still calling. Resurrection lilies are still in bloom in Yellow Springs. One last daylily flowering. The first New England aster seen. Purple coneflowers are tattered and well past their prime. The golden rudbeckia are in full bloom but the first of their blossoms have started to shrivel. One firefly seen tonight.

2004: One monarch came to the zinnias this afternoon.

2006: Skunks continue to spray in the neighborhood close to our house almost every night. Cardinal at 5:29 a.m. and again about ten minutes later. Then silence. One wren chattered at daybreak. False boneset opened in the yard on the 23rd. Peaches are sweet but still a little hard.

2007: Chickadees, nuthatches, titmice and cardinals dominate the bird feeder this morning, sparrows taking a back row to the songbirds. Mateo’s black walnut tree is now down to about half of its leaves. Euonymus berries are full size, big as honeysuckle berries. The tall, white flowers of late August hostas dominate Moya’s yard. Monarchs and swallowtails are common in the garden. Showy coneflowers are starting to die back in Don’s front yard. Our black-eyed Susans are still in full bloom. Cicadas are still strong, start early (about 7:00 a.m.) in this long, humid hot spell.

2008: Late August heat and drought continue as I make late inventory: two orange day lilies have opened since we got back from visiting Jeni in Portland; mallow is down to just a few flowers; one red rose on the new bush, full pink roses on the old; Queen Anne’s lace has contracted; oakleaf hydrangea flowers have become a dark brown-pink; false boneset is well budded; the September “Hillbilly” hostas have come in; still no buds on the Jerusalem artichokes or the New England asters; rose of Sharon still in bloom; showy coneflowers and black-eyed Susans hold, and some faded purple coneflowers; some of the short bellflowers Jeanie planted in July continue to flower; the Heliopsis patch fills almost the whole northwest garden.

2009: Chicory thinning along Limestone Street. Webworms in one of the crab apple trees at the park. Giant hibiscus still full bloom around the back porch. At the Cincinnati Zoo, crepe myrtles in full bloom.

2010: Screech owl at 5:09, robins at 5:19, cardinals at 5:27, crows at 5:33 this morning. Monarchs, tiger swallowtails, Eastern blacks, skippers at the butterfly bush today, but not in the numbers of a week or so ago. A full bowl of raspberries picked this morning, the fruit of three days. Crickets loud when I walked Bella tonight.

2012: Screech owl, ghostly call at 4:00 this morning. Only faint cardinals around 5:30, then crows. Trigs still calling at 7:00. On the way to Dayton, a marked increase in coloration from cottonwoods, maples, silver olives, locusts, ashes, a rapid change since last week.

2013: Four tiger swallowtails and a great spangled fritillary at one time in the back butterfly bushes this morning. The first ripe peach fell to the ground. I ate it on the spot; the windfalls have begun now. This afternoon an Eastern black swallowtail in the zinnias. Prairie dock still at the peak of its bloom at the corner of West South College and High Street.

2014: A dove was the first bird to call this morning, 5:30; a cardinal just a couple of minutes later, then crows, then a robin singong – but isolated, not in chorus; then several blue jays, and then the sharp cries of a red-tailed hawk.

2015: Early morning after a night rain, calm and cool 50s, pure clear blue gray sky: static from the tree crickets, intermittent calls of the whistling crickets; the first cardinals right at 5:30, continuing for several minutes. Crows at exactly 5:35, a dove heard through the noise of cars from the street at 5:45. Finches chirring near dawn, some sparrow chatter a little later.

No robins. In the garden, one lone reblooming lily and the white stargazer. One monarch at about 8:00, then two more and a yellow tiger seen through the morning. Above the zinnias and tithonias, a cascade, a wall of Japanese knotweed, their best year ever, and above them, the hops vines that have taken over the honeysuckles are heavy with blossoms. A soft blush has appeared on the bittersweet above the gate to High Street. At the covered bridge, wingstem and touch-me-nots and ironweed tall and full field thistles as lush as I’ve ever seen them. Along the river path, wood nettle is getting ragged, but it is still troublesome. As I drove home from downtown: a gust full of black walnut leaves.

2016: Fewer butterflies, it seems, but one new very black swallowtail, no blue on its tail.

2017: Jill saw three monarchs on her trip to Delaware, Ohio. I only noticed a couple of silver-spotted skippers in the garden, in spite of the perfect weather: sun and mild. I almost stepped on two toads in the grass this afternoon: migration time?

2018: One cardinal at 5:15 a.m., then quiet. Crows calling when I went out at 6:30. Doves still sing through the morning. Jeanie’s white Stargazer lily continues in bloom. A blush on the goldenrod along King Street, the panicled dogwood berries creamy white. I noticed in the daybook from August’s past that the screech owl has not called in the yard since Jeanie died. This evening, the katydids came in early at 7:35, in the middle of a full range of cricket songs. When I woke up at 2:00 in the morning, the katydids had stopped calling, but the crickets still were buzzing and whistling.

2019: A cold morning in the 50s. Sun and breezy in the 70s. Monarchs throughout the day, and one giant swallowtail. First goldenrod opening just a little in front of Don’s house, blush on the goldenrod across from Ellis. Katydids heard from the back porch at 7:45 this evening.

2020: Three tiger swallowtails, many silver-spotted skippers, one black swallowtail, one monarch in an hour’s watch today as the heat returns.

What is easier to discuss mutually with You, O God, the three crows that flew by in the sun with the light flashing on their rubber wings. Or the sunlight coming quietly through the cracks in the boards? Or the crickets in the grass?