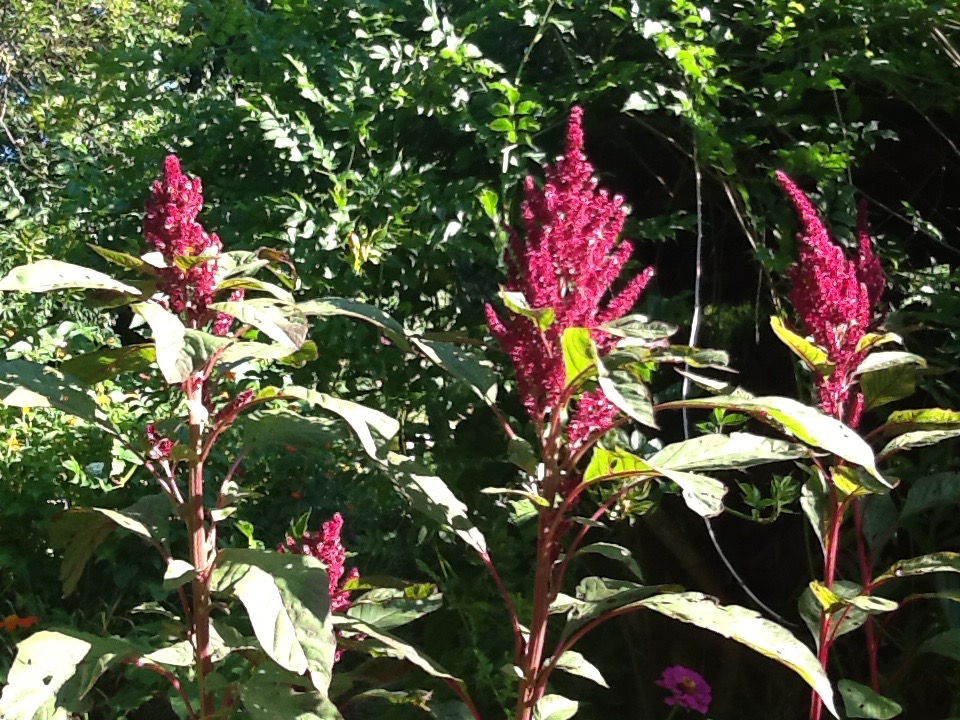 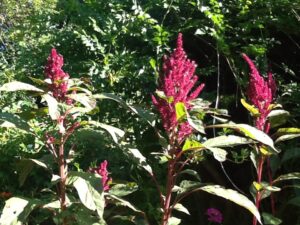 Live in each season as it passes; breathe the air, drink the drink, taste the fruit, and resign yourself to the influences of each…. In August live on berries…. Be blown by all the winds…. Grow green with spring, yellow and ripe with autumn. Drink of each season’s influence as a vial, a true panacea of all remedies mixed for your special use.

Chances of highs in the 90s are 15 percent, for 80s fifty-five percent, for 70s thirty percent. Rain falls two years in ten on this date, and the sun almost always shines. Chances of lows in the cool 50s are 40 percent.

High Katydid Season marks the slow decline of Dog Day Season this week of the year. Migration seasons intensify for wood ducks, Baltimore orioles and purple martins. This is the week of Cottonwood Foliage Yellowing Season and Joe Pye Seeding Season, the time of Three-Seeded Mercury Season and Great Blue Lobelia Season. It is the week during which Spiderweb Weaving Season becomes more noticeable throughout the woods, spiders taking all the prey they can before cold settles in. Firefly Season moves to a close as Late Summer Monarch Butterfly and Swallowtail Butterfly and Imperial Moth Seasons swell. As Apple Windfall Season pulls windfall apples to the earth, Autumn Yellow Jacket Season reaches into the Northeast.

1985: No cardinals before dawn for days now.

1986: Cardinals woke me up at 5:10 this morning; they continued off an on until around noon. Geese flew over at 8:30 a.m., and I heard them again faintly in the evening. Three-seeded mercury blooming in the garden.

1992: The garden holds steady after the lilies are gone. Phlox, zinnias, cosmos, coreopsis, showy coneflowers, purple coneflowers, an occasional balloon flower, snapdragons, mums growing up around them. The flicker still sings in the back trees, but cardinals have been quiet for about a week.

1996: Ever since the 8th, the weather has been cool. The fogs these past two mornings have been heavy, the air wet and cold, the dews thick. The cottonwoods seem to turn more each day. Fall appears to be here already, this Late Summer too prophetic, too dramatic. First monarch seen in the garden today.

1997: Fishing with John along the river: Two carp and a mud turtle caught on night crawlers. At home, the purple loosestrife completes its cycle in the pond and in the north garden. The last resurrection lily fades here, still strong in the village.

1998: Jeanie cut back the purple loosestrife in the pond today, all but a few fragments of flowers gone (the opposite of its full bloom along Lake Erie). Wren eggs discovered in the pitcher plant on the front porch.

1999: One resurrection lily finally bloomed in the south garden, but throughout town, they have been in full bloom for a while. The frog is quiet in this cool wet day, insects hiding. Cardinals at 5:15 a.m. Hummingbird at 6:15 a.m.

2000: August hostas are in full bloom here and throughout town. Two cutover spiderworts blossoming in the south garden. Arrowhead full in the pond, water plantain gone for a while now, collapsed by the side of the fountain. Some fallen leaves along the bike trail. Dry leaves from the front maple were lying on the sidewalk and the street this morning. Praying mantis found in the garden yesterday. Barbara Preis’s mantis has come back this year again, the third or fourth year at least. So it’s possible that the mantis I came across was a descendent of the mantis I found there some years ago.

2008: Laramie, Wyoming to Gothenburg, Nebraska: We left the high desert of Wyoming and, crossing the state line at Pine Bluff (which is actually full of pines and bluffs), entered the greener fields of Nebraska, even great corn fields that seem to have flourished without irrigation. The vistas of Wyoming remained, only greener and maybe even wider. The rock and cliff formations disappeared, and the roadside flowers gradually become more numerous, starting with sagebrush and gumweed and then adding some sweet clovers – yellow, white and purple, banks of common sunflowers and many other plants not identified. At the campsite in Gothenburg, a rich habitat that included tall three-seeded mercury, catnip, a thin-leafed germander, salsify, a rough-leafed ragweed with sharp, pointed leaves, a great Indian plantain type of plant, purple grapes on the wild grapevines, many dark berries still hanging to a red mulberry tree, white sweet clover and others. Upon our arrival this afternoon, Jeanie heard hundreds of cicadas – for the first time since we left Ohio. And at night, crickets!

2009: Walking Bella at 8:30 a.m. No doves heard, a few cardinals in the distance. A squirrel whining in the Limestone Street trees. Privet berries getting big. Moya’s white-flowered hostas in full bloom, and the violet-flowered hosta in the east dooryard garden. Rapidly fading purple coneflowers. Full bloom of winterberry vines in the back trees. Tiger swallowtail, giant swallowtail, and a monarch seen throughout the day.

2010: No birdsong at 5:00, but full chorus plus crows at 5:20. Swallowtails at the butterfly bush again today. Resurrection lilies have been gone for several days. One crab apple at the park is losing berries. One fallen peach at home. Faint robin vespers at 6:30 this evening. This afternoon, Jonatha wrote: “I have exclaimed all summer at the number and variety of butterflies. I do not remember so many since my teens, back in Missouri. As a child I loved them all, learned their names, took specimens and photographs.” Jonatha also sent notes by Nancy Stranahan dated August 12 of this year: “You see, this is the year. A year not only for berries, but also for butterflies, too. We might not experience a summer like this again in southern Ohio for another ten years.”

2012: 4:00 a.m.: Full moon setting behind the backyard locust trees after a soft, long night rain. Low, broken, round clouds from due west allow the moonlight to filter through in creases and lumps.

High-pitched screech of ground crickets, buzzing of tree crickets. Another level, lower, katydids rough and distant. I stand in the dark, blind to the sources of the sounds, aware that I can only hear and see and know a fraction of what is happening around me.

My hearing aids do allow me to have a sort of revived puberty of hearing, a reawakening of that sense. The first cardinal sings at 5:07 a.m. and then again and again. (But I ruminate more about the fragments that I perceive, about how incompletion is the normal state of things, how immersed I am but isolated. too, separated from the exterior world by my failure to actually experience all that is holding me in place.)

Color appears in the zinnias by 5:30. Crows awake at 5:35. Cardinals quieting down a few minutes later. (I conclude that in order to understand this place, I must accept the immensity of my inability to know what I want to know. Compensation: I take what I have and make it stand in the place of what I cannot have. All the hidden aspects of nature that I miss with my senses must be contained by the acceptance of limits, with slight of mind, liberating and allowing freely the bodily cataracts that I bring to observation to encounter enough, facing borders and emptiness, comprehending imperfectly the secrets and consolation of synecdoche.)

2013: Madison, Wisconsin: Cardinals sing occasionally through the day. Only a few cabbage white butterflies seen today. Walking through the park near Maggie’s house, the paths blocked by great stands of tall coneflowers and touch-me-nots, at the same stage, it seems, as in Yellow Springs. Identified pink flowering Polygonum amplex in Tat’s garden, full bloom.

2014: The best day yet for butterfly sightings: Two spicebush swallowtails and a black in the Glen, and at home a monarch, a male tiger swallowtail, a great spangled fritillary, a painted lady (Cynthia), and numerous cabbage whites and skippers. Along the wooded path to the Yellow Spring in North Glen, the very first goldenrod was opening, a shorter variety than in the fields. All the usual flowers blooming: wood nettle, touch-me-nots (yellow and orange), leafcup, wingstem, jumpseed, early black snakeroot. All around the yard and in the Glen, clearweed (Pilea pumila) is in full bloom.

2016: Cardinal heard outside my window: 5:35 this morning. Rain throughout the day as a huge band of storms stalls across the eastern half of the country, but gradual cooling takes place as the August 10th front inches toward Pennsylvania. Throughout the village, the coneflowers are conspicuous. Leafcup lines the woods along the bike path, scattered wingstem here and there. The plantings of the Women’s Park have lost their freshness. Milkweed pods are full size and weathering, often covered with milkweed bugs. Record flooding reported in Louisiana.

2017: One large yellow sulphur and one male tiger swallowtail, many cabbage whites and skippers in the garden this afternoon. The resurrection lilies in town have wilted and fallen over.

2018: Monarchs and swallowtails continue to visit the garden throughout the day. Maggie sent photos of her nine monarch caterpillars.

2019: This morning at 5:00: dense fog, temperature 68 degrees. I walked Ranger at 5:15, and heard steady cardinal conversations throughout the neighborhood (accompanied by field crickets and tree crickets) until about 5:45. Then as the sun came up, the cardinals went silent. The crickets became less strident.

2020: Nine fading resurrection lilies in bloom this morning. Three tiger swallowtails in the zinnias and tithonias all at the same time this morning. Jill’s garden is dominated now by thin-leafed coneflowers. One monarch in the garden and one at the pond this afternoon. Red amaranth tall and elegant now.

Above the arching jimson-weeds flare twos

And twos of sallow-yellow butterflies,