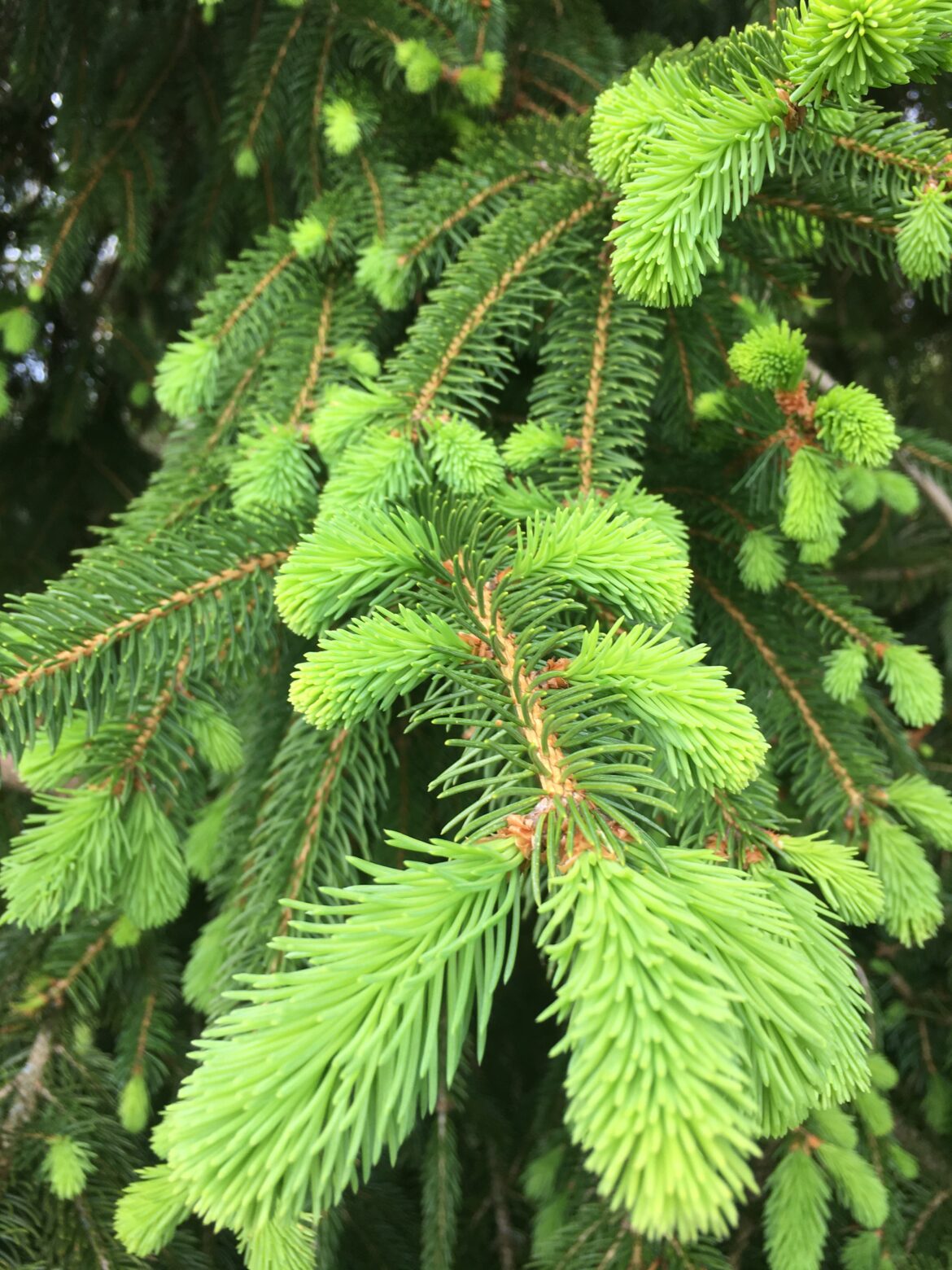 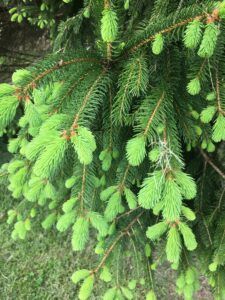 Perchance the beginning of summer may be dated from the fully formed leaves, when dense shade begins. I will see.

As the fifth high-pressure system of the month becomes fully entrenched, today brings a slight increase in the possibility of a high just in the 50s: ten percent of the years get that cold. Most of the time (85 percent of the time), however, May 21 is in the 70s or 80s, with 60s occurring the remaining five percent.  Two years out of three, the Strawberry Rains let up on May 21, and this date records just a 35 percent chance of showers. Skies are at least partly cloudy 70 percent of the time.

On May 21 in 2014, up to five inches of rain fell in the village and in much of southwest Ohio in the span of just a few hours, the most rain in one day during the years for which I have records.

The Yellow Springs Torch of May 24, 1895 noted that on this date (May 21) and the next in 1883, snow fell intermittently for 18 hours, bringing a total accumulation of seven inches in the village: a hard Lilac Winter. This is the latest record I have of local snow in May.

This final week of May, the dense shade has moved up all the way from its source along the Gulf of Mexico high into the northern United States.  Osage and black walnut flowers come down in the rain across the East Coast as leaves continue to expand. In the South, Spanish moss grows its small flowers in the axils of leaves.

Out in the sun, elderberry bushes flower along the highways. Cow vetch, wild parsnips, poison hemlock, angelica, motherwort, blackberries, yarrow and the rough Canadian thistles bloom. Black raspberries set their fruit. The corn has usually sprouted in the fields, and farmers are taking the first cut of alfalfa.

When the canopy of leaves is complete, then flea beetles attack beet greens in your garden.  Aphids multiply on heliopsis. Damselflies and dragonflies hunt the ponds. Leafhoppers, corn borers and armyworms assault the crops. Flies are bothering the cattle, ticks roam the brambles, cricket song grows louder, and the earliest fireflies flicker in the lawn. Along the coast of the eastern Atlantic, sea turtles begin to come ashore to lay their eggs – their season lasting until middle August. In the Georgia and Florida swamps, male alligators bellow out their courtship calls beneath the full, high trees.

We see it like Thoreau saw it: this is, perchance, summer for sure.

1982: First peonies today. Bridal wreath through for the year.

noticed in the garden.

1993: First poppy opens in the yard, well behind others in the village. Clematis full boom now. First patches of red clover seen. First parsnip noticed at Goes Station. Geum now full bloom in the east garden, forget-me-nots lanky and old. Pair of catbirds in the back bushes, singles seen before but never a pair. In the windstorm this afternoon, last year’s maple seeds fell all at once throughout the village.

1995: At Grinnell Pond, maple waterleaf is in full bloom, its pale violet flowers pushing up above its leaves. Honeysuckle flowers are all out, heavy and lush along the path. The canopy overhead still needs its high locusts, Osage, and sycamore to be complete. In the east garden, columbine are still all out, astilbe keeps reddening, bleeding hearts are almost gone. The first strawberries ripen in the new patch. In the south garden, the red pyrethrums and dusky sweet rockets are all open, daisies coming in, yellow ranunculus still full, that garden’s finest time. Along the north row, half a dozen blue Siberian iris in bloom, the other iris, white, pale gold, purple have come in, sweet William underway, lupine just starting.

1997: Throughout town, bridal wreath and poppies are in full bloom.  In the north garden, the first sweet Williams open, and the lone purple iris unravels. Honeysuckles full bloom. By St. Paul’s church, oak leaves are about a fourth of their full size, the shagbark hickory leaves beside them maybe a sixth or seventh of their full size. Along Corry Street, the tree line of the Glen is pale green, with the canopy filling in to perhaps a fourth.

2003: Korean lilac now done, but pale pink peonies and blue flags are in full bloom. The ramp leaves have disappeared, replaced by a thin three-inch stalk and a reddish, elongated bud. The tall purple allium loses its color in Liz’s garden as locust flower clusters come down in the wind. In Dayton, the very first pink spirea is open along First Street. Poison hemlock seen open on the way south to Washington Court House.

2005: Viburnum budding in the pine forest. Dwarf larkspur in bloom in the North Glen.

2006: Jeanie reports that one of her students showed her a giant cecropia moth emerging near school.

2007: To Clifton Gorge with Jeanie: A few last wild geraniums seen, a few white sedum flowers, clustered snakeroot common, maple waterleaf and thin-leafed waterleaf in full bloom providing some of the only real color to the forest floor, one fire pink bud just showing red, a few Solomon’s plume left, a few white violets, Solomon’s seal with triangular seed pods, miterwort with seeds, tulip trees in bloom, two of their fallen flowers on the path, bluets seen on the high path, foliage gone and their petals white, daddy longlegs in the snakeroot and the wood nettle (which was waist high). In town, most of Liz’s poppies are done for the year, her alliums all going to seed. Iris are in full bloom all around the village, privet bushes budded along High Street. Honeysuckle coming to the end of its season, mock orange holding well so far. Tall yucca stalk seen on Davis Street. Each day brings more to notice than I have put in the entire year’s journal.

2008: A young grackle sitting by the birdbath this morning. Tall coneflower foliage is waist high in the alley. Three Dutch iris in bloom today.

2010: Daisy fleabane budded in the alley. Robins there peeping orientation calls to their young.

2011: Italy: To Assisi: Some corn just sprouted, some fields maybe six to nine inches. Wheat seen turned golden green. At the Fountain of Clitumno, some new ducklings, some adolescent.

2012: Rick reports the first fireflies of the year in his backyard this evening, and young toads in the muck.

2013: Inventory on return from a five-day trip to Madison, Wisconsin: Robins chirping at 3:45 a.m., the first cardinal at 3:47.  All kinds of changes: two peonies, two roses and a yellow iris open (iris full throughout the village), and all the locust trees, and the mock orange; almost all the hyacinths and wild geraniums are gone, and the pink azalea is dropping its leaves, the snowball viburnum littering the ground with its white petals; the first sweet Williams have come in; pink and violet sweet rockets and clumps of spiderwort anchor the south garden; bluebells and lilacs (full in Madison) are completely gone here; the bamboo has started to leaf, continuing to drop its sheaths; clematis and catmint and all the weigela (ours and Mateo’s) of the neighborhood are flowering; the buttercups of twenty years ago have started to come back near the pond; honeysuckle (just starting in Madison) has so many darkened flowers, many falling; the last of the trellis wisteria fades, but the Japanese wisteria is in full flower; the one rhubarb plant has sent up a huge flower stalk; dead nettle (lamium) has stopped blooming; the garlic mustard inflorescence is at the top of its stalks, and sweet Cicely is done for the year; poppies are open in front of Liz’s house on Stafford Street; the first white-spotted skipper seen; wild grapes starting to bloom in the east shrubs.

2014: Unusually heavy downpour throughout the village, about five inches in two hours, flooding. DeWine’s pond overflowed, many streets full of water, many photos and videos on Facebook.

2015: Robyn saved a starling fledgling from a cat, but it was in shock, didn’t make it.

2017: More Strawberry Rains. In the northwest garden, the first buds have appeared on the ditch lilies. Lamium still in flower, more spiderwort budding, more stella d’oro lilies and ditch lilies budding. Liz’s alliums are done blooming; I have only two left. Her yellow rose is almost finished. Jill’s poppies fading. And Maryellen Jacobson wrote from Springfield: “I saw the first of my praying mantis hatchings today. They were about a third of an inch long and thinner than a cat’s whisker – perfect little replicas of Mom and Dad. They are feasting on whiteflies, aphids and spider mites (of which there are plenty).”

2018: My first two peonies flowered this morning, small white, the first blossoms of the plants I transplanted there two years ago. On top of the fountain at the pond, a cluster of five young sparrows fluffing and drinking, learning, perhaps from their parents. I saw and listened to a medium-sized gray bird that looked like a catbird,  had a beautiful, syncopated burble song, but had no meow-like calls.

2019: The Eastern black swallowtail was exploring the groundsel and orchard grass again today. First scorpion fly found hiding in the bee balm. Two silver-spotted skippers seen today near the circle garden. All the Indian hyacinths have gone to seed now. Don’s oakleaf hydrangea has sent out buds. Maggie sends a photo of a patch of lady slippers in full flower in the preserve near her house.

At the beginning of Early Summer, the Northern Spring Field Cricket begins to sing in Ohio Valley pastures. This cricket is the easiest of all the crickets to identify because it is the first and only species to appear at the end of spring.  Overwintering as a nymph, it comes out as the canopy closes, when rhododendrons, peonies, and mock orange bloom, and the first strawberries ripen.

By the middle of July, when the other crickets are just starting their seasons, the Northern Spring Field Cricket has completed its cycle.  By then, writes Vincent Dethier in his book, Crickets and Katydids, “the crickets of Early Summer, have sung their lays, courted, consummated their love, and died.  Their consorts have laid eggs in the soft soil and died in turn.”

As autumn approaches, the number of cricket species multiplies, and the task of identification becomes more challenging. Entomologists like Dethier have found that the shape of a cricket is less helpful in naming its species than the insect’s call. “Appearances,” he writes, “are neither distinctive nor meaningful, but an acoustical signal to which the female can orient and home is essential.  And the song must be correct in order to lead the female to the genetically compatible mate, otherwise consummation, even if completed, is fruitless.”

Like Dethier, I find little use for outward appearances as I reflect on the subtle differences in the species of men and women.  There is, I think, something radical and violent that separates us, either some vastly complex design, or else a primordial mix-up that once set our evolution out of kilter, a cosmic banishment that scrambled our voices and scattered us like children of Babel; and in order to find our partners and friends, to break the isolation and loneliness, to be fruitful, we have to sort through a planet of neighborhoods and habitats.  We have to study where we might belong if we were really ever to find home, and then we have to listen and listen until we can hear the song meant only for us.

And the world cannot be discovered by a journey of miles, no matter how long, but only by a spiritual journey of one inch, very arduous and humbling and joyful, by which we arrive at the ground at our feet and learn to be at home.