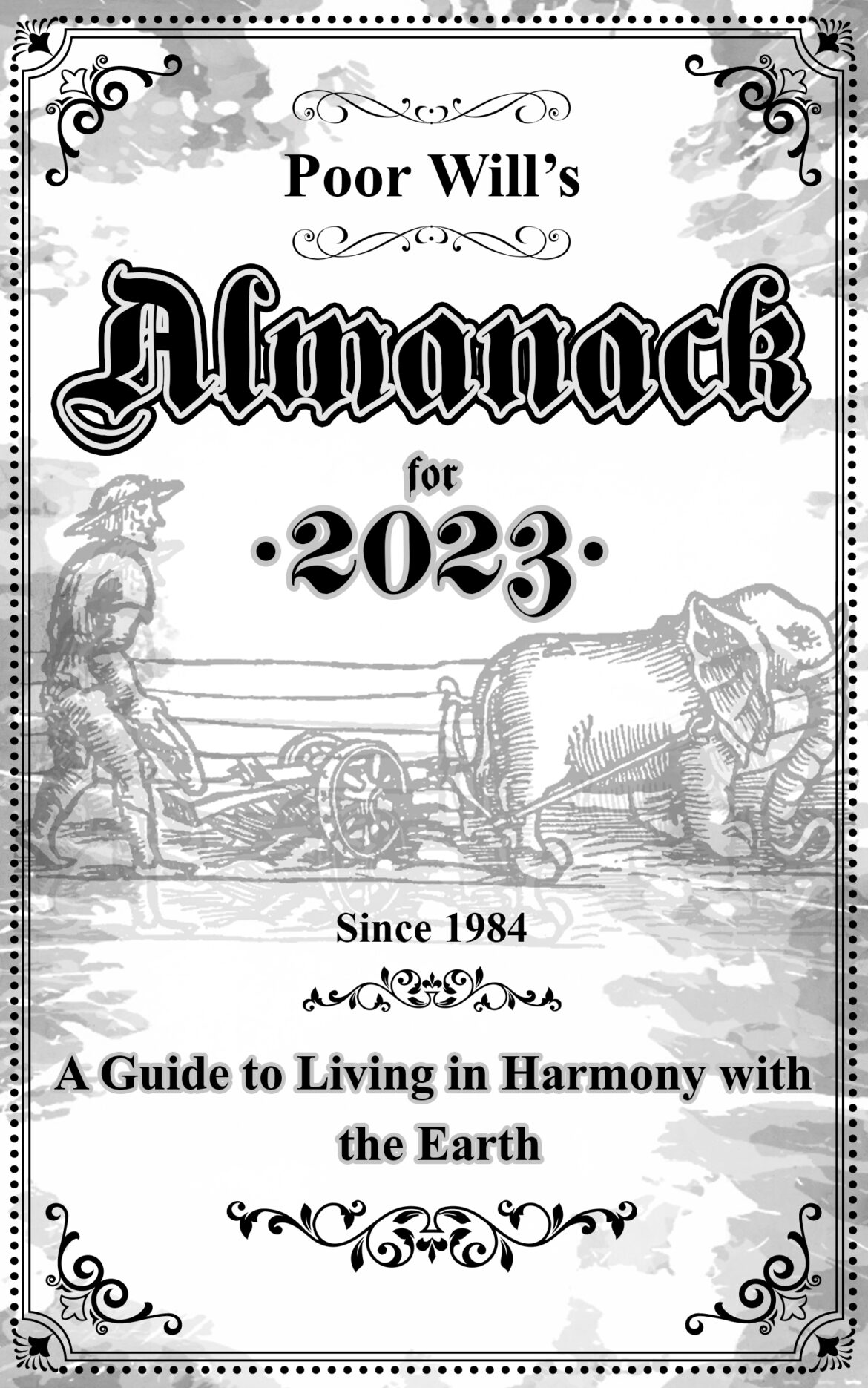 About Poor Will’s Almanack for 2023 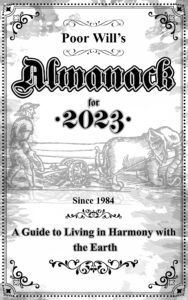 The idea of the Almanack began in 1972 with the gift of a barometer.  My wife, Jeanie, gave the instrument to me when I was succumbing to graduate school stress in Knoxville, Tennessee, and it became not only an escape from intense academic work, but the first step on the road to a different kind of awareness about the world.

From the start, I was never content just to watch the barometric needle; I had to record its movement then graph it.  I was fascinated by the alchemy of the charts, which turned rain and sun into visible patterns, symbols like notes on a sheet of music.

From my graphs of barometric pressure, I discovered that the number of cold fronts each month is more or less consistent, and that the earth breathes at an average rate of about once every three to five days in the winter, and once each six to eight days at the peak of summer.

A short apprenticeship told me when important changes would occur and what kind of weather would take place on most any day.  That information was expressed in the language of odds and percentages, and it was surprisingly accurate.  Taking into consideration the consistency of certain patterns in the past, I could make fairly successful predictions about the likelihood of the repetition of such patterns in the future.  The pulse of the world was more steady than I had ever imagined.

From watching the weather, it was an easy step to watching wildflowers.  Identifying plants, I saw that flowers were natural allies of my graphs, and that they were parallel measures of the seasons and the passage of time.  I kept a list of when each wildflower blossomed and saw how each one consistently opened around a specific day, and that even though a cold yea could set blooming back up to two weeks, and unusual warmth accelerate it, average dates were quite useful in establishing sequence of bloom which always showed me exactly where I was in the progress of the year.

In the summer of 1978, my wife and I took the family to Yellow Springs, Ohio, a small town just beyond the eastern edge of the Dayton suburbs.  We bought a house and planned to stay.  I began to write a nature almanac for the local newspaper.  To my weather and wildflower notes I added comments on foliage changes, bird migration dates, farm and gardening cycles, and the rotation of the stars.

The more I learned around Yellow Springs, the more I found applicable to the world beyond the village limits.  The microclimate in which I immersed myself gradually became a key to the extended environment; the part unlocked the whole.  My Yellow Springs gnomon that measured the movement of the sun along the ecliptic also measured my relationship to every other place on Earth.

My occasional trips turned into exercises in the measurement of variations in the landscape.  When I drove 500 miles northwest, I not only entered a different space, but often a separate season, and I could mark the differences in degrees of flowers, insects, trees and the development of the field crops.  The most exciting trips were taken south in March; I could travel from Early Spring into Deep Spring and finally into Late Spring and summer along the Gulf Coast.

My engagement with the natural world, which began as an escape from school, finally turned into a way of getting private bearings, and of finding a sense of values.  It was a process of spiritual as well as physical reorientation.  The extremes of that process often puzzled me as well as my family and my newspaper readers.  Why I felt compelled to go well beyond a barometric notebook and end up describing the average weather and the state of nature on each day of the year I have not the slightest idea.  My search for home must have required it of me, and so, in that sense, all the historical statements in this Almanack’s seasonal notes are the fruit of a strong need to define, in maybe excessive detail, where I am and what happens around me.

When I began almanacking in 1984, I wanted to choose a name that was different from the “farmer” associations of the current best-selling almanac.  The logical choice seemed to be to reach back to America’s first and most famous almanac, Poor Richard’s Almanack, prepared throughout the latter part of the 18th century by Benjamin Franklin.  Ben had many imitators back then, among them, a certain Poor Will.  Although it has been almost 200 years since that Will tried to follow in Franklin’s footsteps, I thought it was not inappropriate for William (Bill) Felker to revive the name and the tradition, while making a clean break with the kinds of almanacs currently sold in this country today. In Poor. Will’s Almanack, I will refer to other almanacs without the k.

Poor Will’s Almanack is divided into 15 sections, one for each month between December 2022 and December 2023

ZEUTGEBERS: Events in nature that tell the time of year

Position of the Sun

Phases of the Moon

Positions of the Major Planets

Suggestions for Farmers and Gardeners