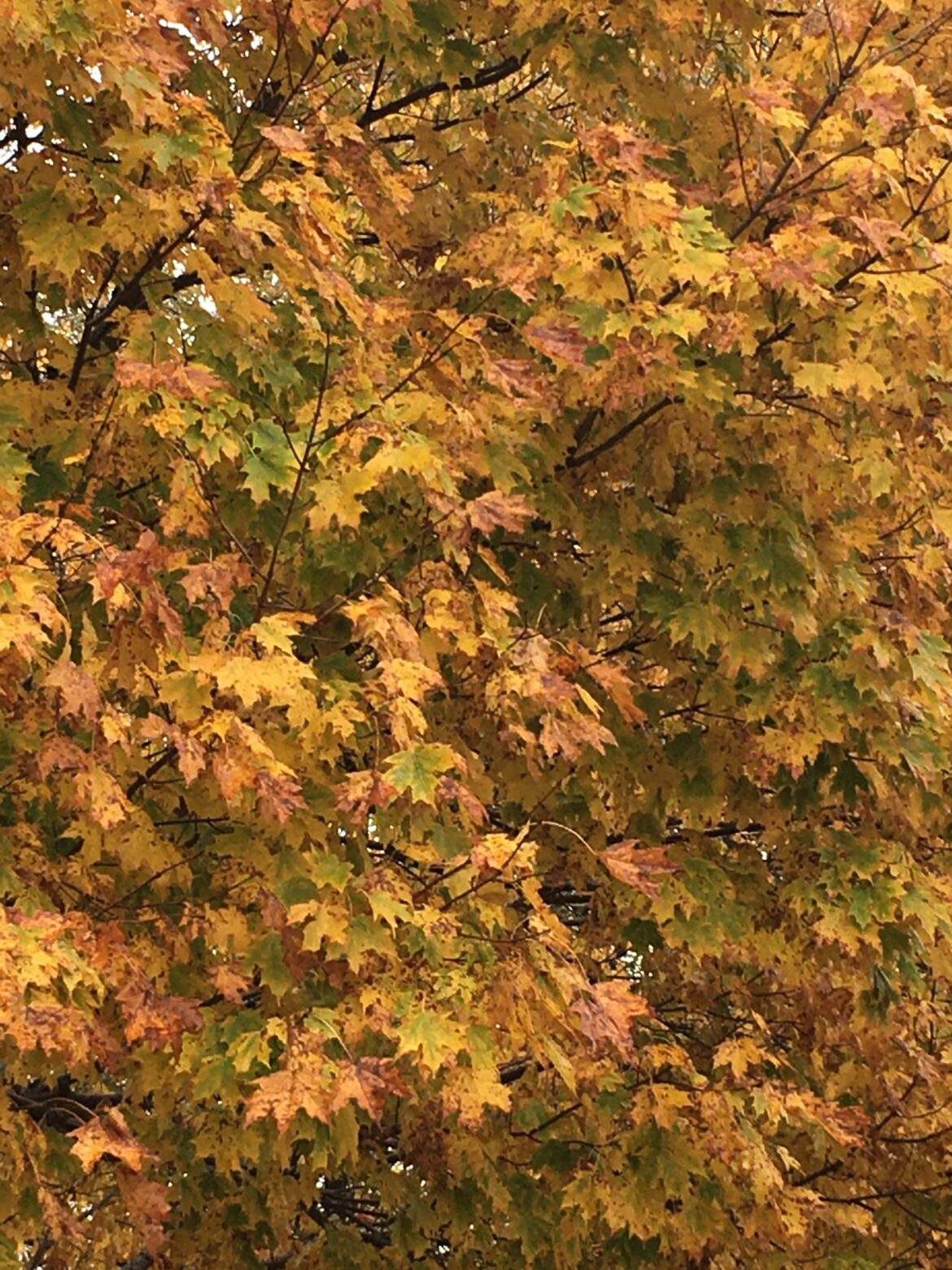 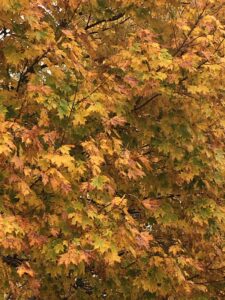 Time may be too short for our Designs…

The World itself seems in the wane.

Most of the milkweed pods have opened. A few blackberry bushes are bare; others are still red and purple. Mums are past their best, but the witch hazels are usually still flowering.

1982: All the white mulberry leaves are gone, down in a single day. Comfrey is still green and strong. New burdock, two feet tall, is bright emerald green. Most grape leaves have fallen. Raspberry leaves are dark gray and withered.

1988: First snow, one inch, as Late Fall pushes through with a sudden plunge in barometric pressure.

1990: Yesterday, a huge low-pressure system cut away the last ridge of Middle Fall. All my magnolias at school fell together, lay in a pile by the west door. The ginkgoes outside my window turned between the 2nd and the 5th, and then they all came down today in 40 mph gusts. Late leaf-drop is finally taking place almost everywhere. Even Lil’s stubborn maple shed all its leaves today. Only the white mulberry is holding. Geese flew over 5:20 p.m.

1993: Skirts of gold all around the ginkgoes at Wilberforce today.

1995: Ginkgo leaves fell all at once last night. At home, the red mulberries and the rose of Sharon leaves along the south edge of the property have come down within the past two or three days, all the summer’s privacy now gone.

2000: Red oak down at school, English oak almost half shed, ginkgo three fourths. At 4:45 p.m. as I leave, hundreds of crows fly over, probably heading home for the night. In the yard, red mulberry, rose of Sharon, quince half to three-fourths fallen.

2002: Cardinals singing back and forth at 6:55 a.m., the sky clear, 32 degrees. South to Wilmington: still very strong color. We are maybe at October 27th as far as “average” foliage conditions are concerned.

2003: Throughout the countryside, most of the leaves are down except for the bright yellow Osage, a few yellow maples, a few brown oaks.

2004: Robins were migrating through the yard this morning. Starlings filled the back trees at noon.

2005: One of the large jade trees in the greenhouse started to bloom this morning.

2006: In the middle of all the fallen leaves near the shed, one violet cyclamen continues to bloom. Jerry and Lee’s sweet gum tree has all its color and is starting to shed a little; the soft maples in the alley are half down; the Dayton Street beech tree is just about full gold. No buds on the jade trees this year. A cardinal sang this morning at 7:00. Robins still heard peeping in the back woods. Moya said she saw a pheasant between our yards one afternoon last week. Could it have been a turkey?

2007: Black walnuts are falling quickly from the Limestone tree, and two of Mateo’s last four came down yesterday. Temperatures finally have fallen below normal, and frost comes almost every morning. Lil’s tree is in full color now, and the Danielsons’ is full and almost half down; Mrs. Timberlake’s is almost full. Sparrows are ravenous at the feeders. Starlings sit in Don’s tree most every morning, starling chatter throughout the alley. Two yellow tea roses cut from the garden last week continue bright, wide open.

2008: Paying attention to where and when the sunlight comes through my window helps me to feel cared for. Strangely, it makes me feel chosen.

When I watch it, I feel like I am not only following time made visible and measurable right on my wall, but I am also finding a place for myself in the Sun.

My relationship with the Sun is different when I am outside. Out in the yard or the woods or on the road, the Sun has no limits. It shines everywhere, belongs to everything and to every creature.

But when I am inside watching in my room, the Sun is more intimate. It is not so vast and almighty. Instead, it seems a bright blessing for me. I am the only one who sees it here. It is a light for solitude and courage and an ally against the winter ahead.

2009: Mrs. Timberlake’s giant silver maple is the only tree on the block holding so steadily, a palomino golden green. Crows at 7:30, robins peeping this morning around 8:30. No starlings heard or seen until the middle of the day when a whole flock swooped down onto our honeysuckle bushes and gobbled berries.

2010: Crows at 7:09 a.m., robins peeping after sunrise. Roses at the Korean restaurant in Fairborn in full bloom. Sweet gums and ginkgoes continuing to shed, but many of them have most of their leaves. Matt called from down the street about 9:30 this morning, said he and Jennifer had heard some kind of geese or cranes calling when they went outside. Matt didn’t think they were Canadian geese, and it is too early (I believe) for sandhill cranes. And when I played a recording of the sandhills for him, he didn’t think that was the right sound

2011: To Yellow Springs from Gethsemani in Kentucky, sun and 60 degrees all the way: The landscape mostly bare throughout the trip, more leaves actually appearing the further north (and the further into suburban plantings) I drive. Oaks are the most prominent holdouts along the way. In Kentucky, one monarch killed as I was slowing down for construction. Another monarch butterfly seen crossing (higher) the highway near Dayton. Buzzards sighted off and on throughout the trip, six deer road kills by the side of the freeway. At home, the quince leaves have filled the garden pond; about half of them remain .

2012: The silver maple at Ellis Pond has shed its leaves, clusters of ruddy buds prominent now. All of the bald cypress trees have dropped their foliage, and only the sawtooth oak and the willow by the edge of the water have kept green leaves. Throughout town, all of the ginkgoes have fallen, and even the Dayton Street beech tree is losing leaves. No more mice coming to the traps in the greenhouse: three voles and three field mice were the total.

2013: Lil’s burning bush started to shed dramatically overnight. Intense leaf fall throughout the village, ginkgoes poised to come down, full gold. Over half the quince foliage fell to the pond in the afternoon wind and rain.

2014: Robins still whinnying in the morning throughout the neighborhood.

2015: Another day in the low 70s, robins whinnying, quince foliage down but lilacs and elm holding out so I can’t really take the netting from the pond. Lil’s burning bush bare, her maple just keeping a few shriveled leaves. My Osage is gold and shedding early. The white mulberry trickles down. One hundred snow glories planted, 80 windflowers today, and 120 tulips yesterday, 75 daffodils last week. Chickadees and titmice constantly feeding. Numerous buzzards circling Xenia Avenue in the afternoon. Ed Oxley reported seeing a giant flock of blackbirds north of town – the first report I’ve had of the great gatherings this fall.

2016: Sun and mild, light breeze: In the zinnias, honeybees, a large bumblebee, a painted lady and a pearl crescent. No quince leaves down yet, Lil’s burning bush holding all its leaves, her maple still full gold. Intense feeding at the bird feeders, chickadees, the red-bellied woodpecker, a blue jay, cardinals, titmice, sparrows. At the grocery store parking lot, all the persimmon leaves are down, but the branches are still full of dusky-rose fruit.,

2018: The sun was bright all morning, and then wispy “mare’s tails” cirrus clouds filtered the sunlight and cooled the midday. Late Fall was due, with wind and rain. At about one o’clock, I looked into the back yard and saw one male goldfinch, half-gold, sitting alone on the perch of the finch feeder. The usual sparrows and chickadees were nowhere around. The squirrels that almost always haunted the ground in search of bird food were absent.

When I was about to go out the back door an hour later, I held back because the finch was still sitting at the feeder, and I became curious about his solitary vigil. Was he sick, ostracized, abandoned, lost? Was he the first or the last of a flock? Was he waiting for another finch? What was he feeling? A half hour later, I saw that he had flown to the top of the pole that held the feeder. He was still there after another half an hour, but then he returned to sit at the feeder fifteen minutes later.

Gray altostratus clouds slowly obscured the sun. The storm was moving closer. Still, the finch waited. Until, when I checked at 3:45, I saw that there were two half-turned, male goldfinches at the feeder. I looked out at 4:00, and they both were gone.

Later that afternoon, the storm that would take down all ginkgo leaves brought the dark in early. And I felt relieved for the first finch. Maybe he had been overcome by a crisis of solitude or by fear of being alone just as cruel weather threatened. Maybe the second finch had come just in time.

I realize now that my interest had less to do with the solitary goldfinch than with my own emotions. In my ignorance of what may be common finch behavior, I projected my own anxieties upon the visitor. I made up an existential story to fit my nervousness at the approach of Late Fall. Embarrassed about that, I composed an odd koan to chide my feelings: “What is the meaning of one goldfinch waiting?”

2020: Another day of sun and warmth in the 60s, robins peeping all around the yard, Carolina wren song at dawn. Sulphur butterflies and grasshoppers in the path beyond the pond.

There are no fixed limits,

Time does not stand still.

The game is never over,