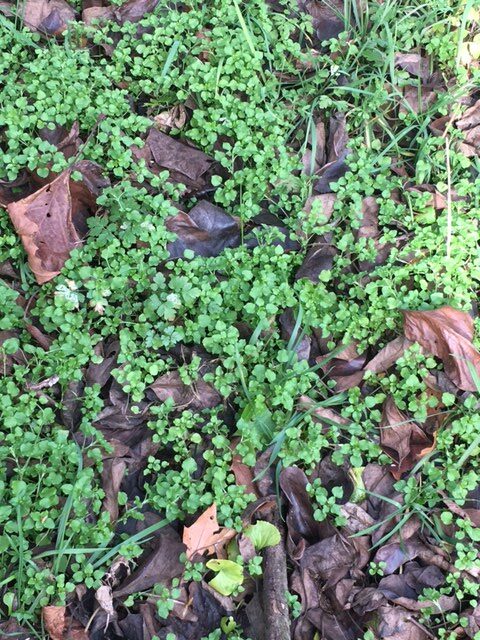 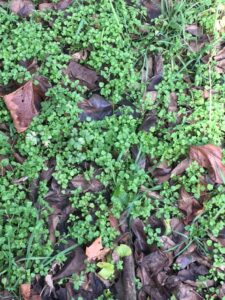 Old things, in such light, grow subtle and fine,

Chances of precipitation drop from yesterday’s 60 percent down to 30 percent, and the sun shines half of the days in my record. Temperatures reach the 70s five percent of the years, are in the 60s ten percent, 50s forty percent, 40s twenty percent, 30s twenty-five percent. Snow falls once in a decade. Lows in the single digits become a possibility, but lows still remain above freezing a little more than half the time.

Now the inventory of the neighborhood year rests on a count of the remaining leaves on trees or plants, the breakdown of the fallen leaves, the subtlety of the last colors, the coming apart of seed heads, the disappearance of berries.

The silver maples and the oaks thin out. Forsythia turns deep red and gold from frost. Poplars shrivel. Most mock orange leaves and most of the lilacs are gone. Sometimes half the ginkgo seeds hang on above the golden skirt of their fallen foliage; often they have all come down.

Late Fall deepens with rust overtaking most of the beech tree on Dayton Street; red and gold are spreading through the pears. Osage fruits are almost all on the ground, stand out chartreuse, at random, in the tangle of the undergrowth. Cypress trees have thinned, their branches a delicate web against the sky. Pink coralberries glow in the hedges. Bittersweet berries crack and reveal their softer cores. The foliage of black-eyed Susans is gray, flower petals gone, centers so black. Silver olive leaves have fallen.

There are red berries on the flowering crabs, on the dogwoods, and on the hawthorns, on the honeysuckles, on the bayberry, red hips on the roses, bittersweet hulls on the sidewalk, white exteriors of euonymus berries splitting, revealing the orange cores. Stems of salvia have exploded from the cold. Hostas dissolve into the soil.

Garden lettuce, rhubarb and comfrey are prostrate in the cold. Hydrangea and mock orange leaves are curled and blackened. Finches work the sweet gum trees, digging out the seeds from their hollows. The last daddy longlegs huddle together woodpiles and brambles. Late woolly bear caterpillars, most of them dark orange and black, still emerge in the sun. Juncos arrive for winter. In the mornings, robins peeping all around the village. Geese continue to gather at the pond.

The oakleaf hydrangeas are becoming dusky purple, and the goosefoot foliage in the garden is a blend of gold and yellow and red and violet. New leafcup foliage is a foot tall now beside lush sweet rocket and hemlock. Some purple deadnettle is budding.

1984: Seven magnolia leaves left at the west wall of my building in Wilberforce. Some silver maples have almost all their leaves.

1985: Our cherry tree lost all its leaves overnight.

1994: No hard freeze yet. Information I have from the Xenia weather station suggests that a killing frost has occurred by the third week of November better than 98 percent of the time. November 25th is the latest date for such frost in central Ohio, and if we can get past the cold fronts of the 18th and the 24th, we’ll exceed that date maybe by as much as five to ten days.

1997: No birds at all this morning, not even crows. A dusting of snow on the ground today; I raked the yard a little bit anyway, the leaves wet but crisp from the cold. Collars set around the roses. In the garden, kale, cabbage and chard have survived the gray and cold. A few new weeds have sprouted here and there. This afternoon, a fly was trying to get out of the greenhouse.

1998: Poplars and lilacs hold at about a third. Crows quieter the past two weeks.

1999: Today I read back over the mid-March daybook, and I look outside to the same landscape, and I imagine spring and myself there.

2000: In the late autumn rain, I watch the apple tree that stands outside my back door. The tree has become a gnomon for me, a measure of the seasons and years. It has grown here for almost a century, and now it’s dying.

The rain is slow and soft. At the base of the tree, the fallen apples have decayed. The yellow jackets and the bumblebees that loved them are gone. Hostas in the apple garden are tawny, seedpods brittle and empty.

To my right, the locust and the box elder are bare, and the white mulberry is yellowing. On my left, the Osage is gold, fruits down on the woodpile. Honeysuckles are weakening all around the yard, showing their red berries. In front of them, the asters from September are gone, along with the ironweed, the butterfly bushes, summer lilies, blue iris, tulips, daffodils.

Cars hiss by on Dayton Street. A squirrel is chattering. Crows come to the woodlot west of my back door. I think about the long flock of blackbirds that flew over yesterday morning. Last night, I heard just one whistling cricket.

2002: In Dayton, the ginkgoes near the University of Dayton hold at half, even though the Yellow Springs ginkgoes fell on schedule.

2003: A loud cardinal interrupted my reading at 7:02 this morning. When I went out near 9:00, I could hear robins and grackles in the distance.

2005: First snowflakes of the year as a hard cold front cuts across the Midwest (tornadoes all across the Border States – the third or fourth such event this month). To Switzerland County, 100 miles southwest of Yellow Springs: The hills were brown, freeway grass still quite green, honeysuckles thinning, yellow green below the bare canopy. A few white mulberry and Osage, still intact, scattered here and there. Pear leaves still green and holding most places. One bedraggled ginkgo kept most of its leaves in Vevay. Bennington Road was green and glowing in the low, gray sky, the pastures rich and the roadsides promising April.

2009: The beech on Dayton Street is empty, and Peggy’s pear tree is shedding. Driving south to the paper store, we saw all the honeysuckles yellow and thinning. The crop report I received today said that the second week of November this year had been seven and a half degrees above normal. Although there have been two or three light freezes, killing annuals and withering some leaves, there has been no serious frost yet. As I walked Bella tonight, soft distant field cricket song.

2010: An all-afternoon rain soaks the Ohio Valley for the first time in weeks. John, arriving from fishing at Santee-Cooper, told about the inconsistent catfish biting patterns, but also about catching his first 22-pounder last night.

2011: Rain for two days, mild in the 50s. The beech on Dayton Street is almost bare. Pear trees along Xenia Avenue are half down, colder and windier weather becoming the norm now. The white mulberry tree and the Osage tree are shedding slowly this year, no violent collapse as has happened many times in the past.

2012: A large flock of starlings has settled over the west end of the village this midmorning. Occasional robin chirps, sparrow chatter around me as I stand looking up into the trees. Along Dayton Street, the beech has lost all but its lower leaves. Downtown, the pear trees are full burnished gold and shedding. The post office Zelcova has been down for a while, but others along Xenia Avenue still hold copper-brown. At Ellis Pond, the sawtooth oak is yellowing more and more, and the weeping willow leaves have wrinkled and grayed from the daily heavy frosts. In the back yard, the oak leaf hydrangea leaves are deep red-brown-violet. The last mum, the red one with the yellow centers, has finally ceded to the cold. I cut down the last of the peony stems, raked the plot clean so I could see the red spears of the new year come up in February.

2014: Gray and cold in the 20s, light wind. One robin whinny as I walked Bella after breakfast. A handful of starlings sat in Carl’s black walnut tree whistling and chattering. In the alley, some solitary starlings, some in groups of three. As in many years past, the white and green snow-on-the-mountain has grown back to about three inches high.

2015: Robins still peeping in the morning. No starlings in town, however. Even though the days have been warm, the pond water has chilled from the cold nights, and the koi were slow to feed this morning. From Umbria in central Italy, Neysa says that the persimmons have come in early this year, a lush crop, their persimmon tree laden with large fruit.

2016: After a week of chilly nights and sunny days, the koi are sluggish, don’t seem interested in eating.

2018: Bittersweet hulls on the sidewalk near Limestone Street. They came down when the ice melted from the vines. Yellow Springs Creek: water bugs still spinning.

2020: Even after yesterday’s winds, the mulberry keeps maybe a fourth of its leaves, orange in the morning sun, and the Osage seems unfazed by the storm. Several robins in the alley at dawn. Chickweed creeps across the woodland floor, prophesying spring amont the fallen leaves. This evening, Category 5 Hurricane Iota moves on Nicaragua.

Flakes gold-leaf from the trees

And the painting darkens –

As if a thousand penitents

Back to bare wood

Jane Hirshfield, from “The October Palace”