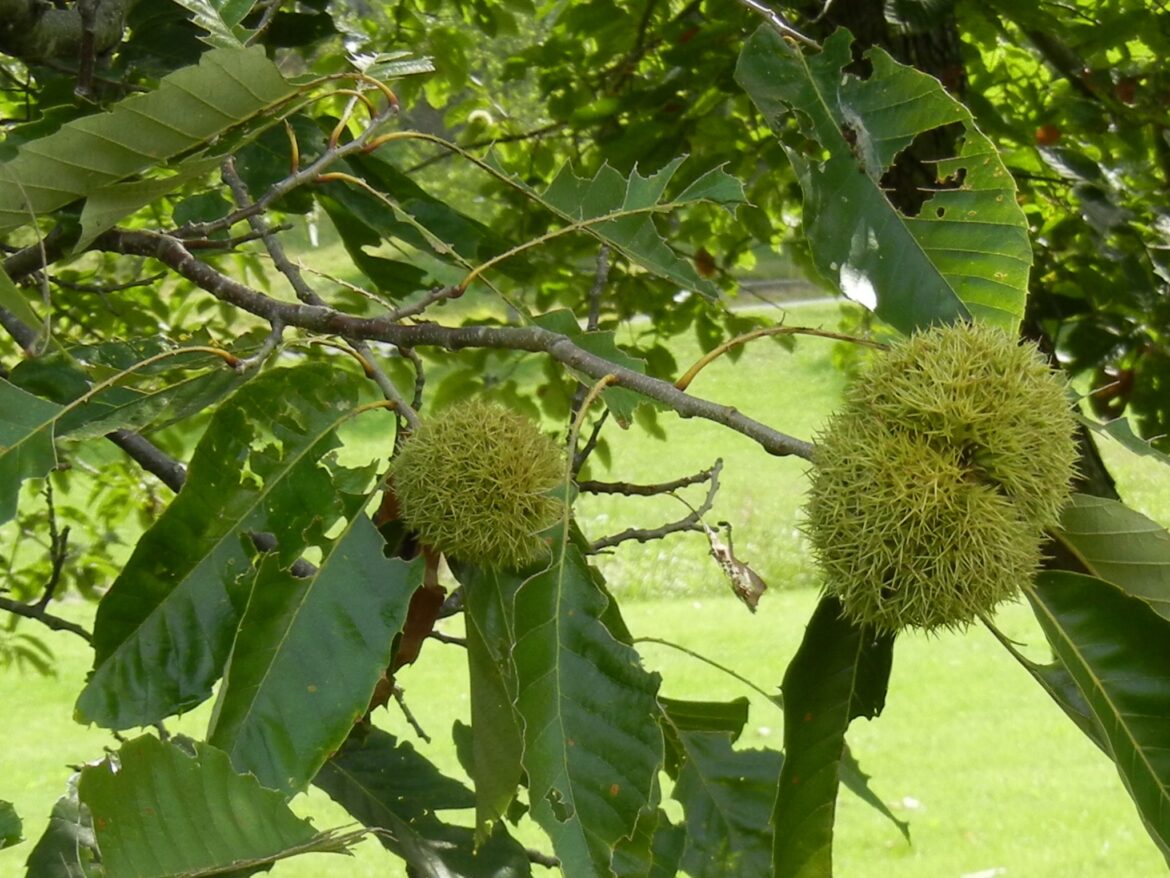 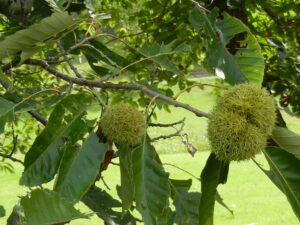 Been sitting on the porch listening and watching

as the sun lowers behind the horizon.

and at dusk robins cluck the benediction for day,

and the tree frog follows with invocation for night activities

to start with wonderful sky line colors at that time.

Nineties comes 30 percent of the afternoons; 80s occur 30 percent of the time, 70s thirty percent, 60s ten percent. Today is typically twice as sunny as yesterday, with all but 20 percent of the days bringing clear or partly cloudy skies. Rain falls three years in ten. Another statistical pivot to autumn, this one a bit dramatic: a very light frost could appear on the roof one year in every 25. One night in three drops below 60 degrees.

Depending on the year, cottonwoods are turning, and box elders, catalpas have started to lose their color. A few big yellow leaves of the white mulberry drop early. Sometimes all the black walnut leaves are down. Locusts and lindens are rusting from leafminers. The rare Judas maple of early August spreads its orange and red across the hillsides. At Gethsemani in Kentucky the chestnuts are falling.

1988: First maple tree leaves in the yard turned over night in the rain. Wingstem fading, burdock forming burs. Common dodder (love vine) has colored the riverbanks rust with its tangle of tendrils, and is finally in bloom. At the Covered Bridge, Joe Pye weed is almost all brown, goldenrod and knotweed just opening. First woolly bear caterpillar of the year seen today. Crickets not heard tonight.

1989: Cardinals and doves began to sing a half hour before dawn. They’ve continued now for hours. Is it the beginning of second spring – a renewal of birdsong?

1990: Cardinal called once this morning, then quiet.

1992: My ash at Wilberforce is almost completely golden green.

1996: The wren nest in the begonia hanging on the front porch is finally empty. The mother tended the two eggs and the nestlings all August.

1998: Cardinal sang at 5:37 this morning, crows followed, then a wren. The birds sang off and on for half an hour or so. By 7:30, grackles and doves were calling, the others quiet. In the pond, the water lilies continue to bloom, one or two a day. The last arrowhead is flowering today, and its seedpods are big and green now, its leaves yellowing. Autumn coming quickly.

2000: To Wilmington and back: Flurries of black walnut leaves, goldenrod in bloom, false boneset, field thistles, sundrops, tall coneflowers, Queen Anne’s lace, chicory, horseweed, Jerusalem artichokes, stonecrop, jewel weed. At Wilberforce, my ash tree is losing leaves on schedule, and maybe a fourth of the leaves are yellow. On Wilberforce-Clifton road, one mimosa tree is still in bloom.

2001: Jumpseed is still in full bloom along the sidewalk in front of the house. One Judas maple turning in Hustead, but nothing else all the way to Columbus. Then: yellow locust leaves all over the parking lot at the university. From my office window at the university, one red maple has just a tinge of color here and there. The great white oak is still pure dark green.

2003: At South Glen, some buckeyes are completely bare. Wild cucumber is in full bloom, some fruits more than half an inch long. Wingstem and ironweed are still in flower, goldenrod here still just budding (although yesterday I saw several plants open along the road to Troy). A few jumpseeds are jumping, some wood nettle leaves turning white.

2004: Crickets were still singing at 5:00 this morning; they quieted in proportion to the advance of sunrise. No cardinals until 6:10, then silence until I heard doves about 6:30.

2005: Hummingbird moth seen in the impatiens at about 10:30. Monarchs still common in the zinnias.

2007: A cardinal called twice at 5:40 this morning, crows came by at 5:55. Tall coneflowers decline suddenly in the alley. Jumpseeds aren’t jumping yet. A hummingbird came to the feeder off and on this morning.

2008: Hurricane Gustav points to New Orleans. The first peach fell from the home tree yesterday. Today, I noticed a pile of red windfall apples in an orchard on the way back from Fairborn. No doves calling for a few days. Sparrows and finches continue to feed heavily. Clusters of cabbage butterflies romp in the north garden. One monarch came by in the afternoon.

2010: This morning’s raspberries, a full pint, seemed to be the peak of the season. Three male tiger swallowtails and numerous silver-spotted skippers in the butterfly bush while we had lunch today. Hurricanes, absent until last week this summer, are lining up in the Caribbean. Here, the grass is turning brown for lack of rain. Along the roads, the dry weather is taking its toll, blanching grasses and trees, turning the soybean fields more quickly. Knotweed is in full bloom at home and in the alley. From Spoleto, Italy, Neysa says that she and Ivano picked nine kilos of blackberries in the hills near the city.

2011: A cardinal sang at 5:38 this morning – but only continued for ten minutes or so, crows at 5:45, squirrels started at 7:00. The high grating trill of crickets when I first went outside, occasionally voiced-over by the ghostly whistling crickets. Hummingbird wars, as Jeanie calls their competing to drink from the red feeder Ruby gave us, continued through the day,. The first of Moya’s jumpseed jumped when I stroked it as I walked with Bella by her house. One monarch, one black and one tiger swallowtail seen, one brown, one blue. Crickets loud at night, but katydids seem to be tapering off. One chigger bite from yesterday or this morning.

2012: Only crows this morning about 5:30. High trigs, occasional whistling crickets. Scattered birdsong later, crows, blue jays, a cardinal. Sparrows staying away from the feeder, but bright finches, up to five at a time, on the finch bags.

2013: An orb-weaver made its web on the tall bird feeder over night. A dove was calling in the back at 5:30 this morning. Small basket of peaches picked for Janie, plenty more on the tree, the windfalls holding back some. Goldenrod finally coming into bloom along the highway. Petals fallen from the winterberry flowers. A fledgling goldfinch fluttering its wings, begging for food on top of the feeder. Honeybees swarming around the hummingbird food, the hummingbirds having to push their way through to eat. Fewer swallowtails today. Tonight, whistling crickets joined the thrips at about 7:15, katydids started in at 7:35.

2014: Bright and warm. The sparrows stayed away a while: chickadees, tufted titmice, cardinals come to the feeder. Lots of cabbage whites today, two yellow tiger swallowtails, one faded and bedraggled black, and a great spangled fritillary. At the North Glen, the very first aster was opening, one white flower on what seems to be the foliage of Short’s aster – leaves not toothed at all, large and shaped like elongated hearts.

2015: Crows at 5:44 this morning, one cardinal chipping, then trying to warm up at 5:38, then silence. No doves calling or even sparrows chirping. One monarch seen – a quiet day for butterflies. In the Women’s Park, all the heliopsis and coneflowers are gone. Only some early white asters are in bloom, and the cup plant. The High Street prairie dock continues full bloom. Along Dayton Street, a few maples are turning. In the late afternoon, I sat on the porch, the wind before the coming storm pulled showers of yellow locust leaves to the yard beside me. Tonight, the crickets and katydids are in full song as the storm draws nearer.

2016: I noticed a hummingbird moth in the zinnias this morning, the first one I’ve seen since early July when the monarda was in full bloom.

2017: A small black swallowtail and a pipevine swallowtail in the zinnias at noon. In Texas: the greatest amount of rainfall with one event in American history. This is also the anniversary of the landfall of Hurricane Katrina in New Orleans in 2005. The last days of August: the crucible of Global Warming in the Atlantic Ocean.

2019: Sun and mild: Inventory in response to last year’s on this date: Jeanie’s roses had one flower this summer, nothing in bloom lately; no Shasta daisies this year; phlox still holding; rose of Sharon strong; trumpet creepers still strong; purple coneflowers (just three blossoms this year) all gray; no heliopsis flowers for weeks; stonecrop fully budded and blooming; blue day flowers common; honeysuckle berries dusky red; lots of purple pokeweed berries; Jeanie’s river birch, which has lost leaves all summer, seems more fragile than last year; milkweed weathered and old; New England asters and goldenrod still just budded; day lily leaves all decayed. Zinnias, tithonia, castor beans and canna lilies provide color to the garden. Three monarchs playing together in the tithonias, and swallowtails, skippers and cabbage whites not uncommon. So what has changed? Very little. Most of the differences are in the garden flowers that failed to make it through the winter. The jumpseed flowers/seeds, though, still cling to their stalks, and I have not seen a hummingbird moth in many weeks. At Jill’s house, an orb weaver has set up its web across her back porch (as Hurricane Dorian gains strength and heads for Florida).

2020: A golden fold-wing skipper in the zinnias. A spicebush swallowtail sunning on the pokeweed leaves in the morning, a visiting monarch in the afternoon, two hackberry butterflies, many skippers, cabbage whites and hummingbirds throughout the day. Jumpseed is in full flower in the yard and throughout town, its lanky stalks bending over the sidewalks and lawns. The tall marigolds have finally reached full bloom; they were planted at the same time as the zinnias, which reached full bloom a month ago. No large orb weavers seen so far. Hurricane Laura, having crossed the country to the east, has moved out into the Atlantic. Coming home from shopping, Jill and I saw a huge murmuration of starlings crossing above the road.

Not the sun or the summer alone, but every hour and season yields its tribute of delight; for every hour and change corresponds to and authorizes a different state of the mind.