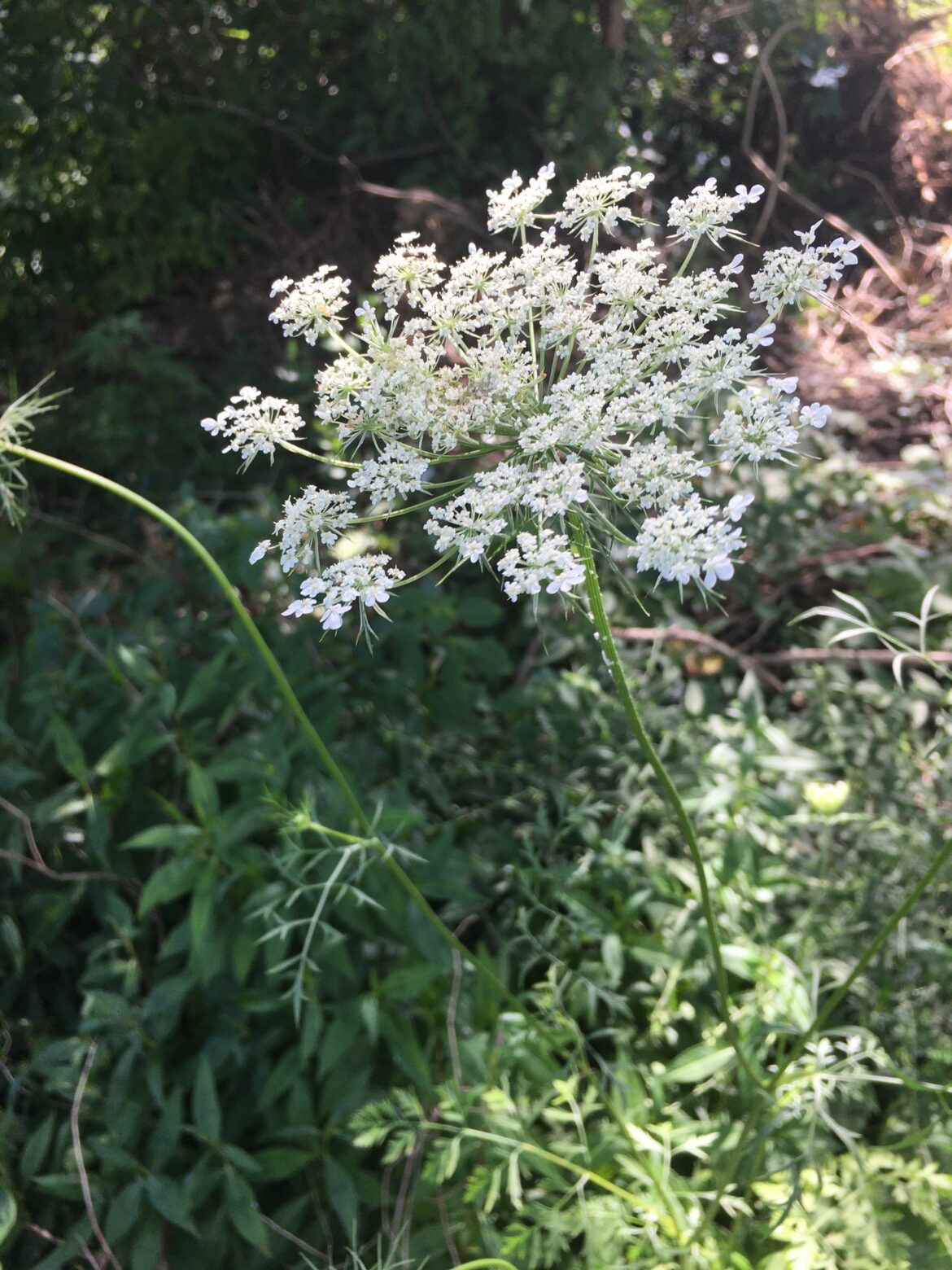 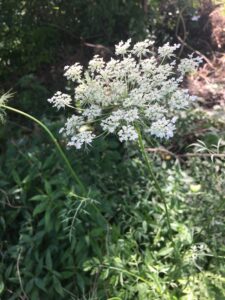 I hear the blackbird in the corn,

The locust in the haying.

More Dog Day stability: mild highs in the 70s are recorded just five percent of the afternoons; 80s come 55 percent of the time, 90s thirty-five percent. But today is one of the early pivot points in the progress toward winter: it is the last day of the year on which 100 degree temperatures have a five to ten percent chance of occurring. Showers come 35 percent of all the years.

The best of the morning bird chorus is now over for the year. The cardinals still greet the dawn, but on many days they stop singing after sunrise. Robin calls have lost their mating whinnies and singsong chirping. Swallows are migrating; they can sometimes be seen congregating on the high wires. When the mornings are cool, fog hangs in the hollows before in the twilight.

1990: First geese, honking, flew over today at noon: the first sound of fall. Most lilies are gone. First late-summer field crickets heard outside the house tonight.

1993: On a walk with Buttercup, our bulldog: Most gardens full of coneflowers and coreopsis. First burdock seen blooming. Scent of Late Summer in the morning air, dew heavy, the smell of old leaves, of spent flowers. At Wilberforce, locust trees rusting from leaf miners.

1997: Down the bike path: First cicada heard halfway to Jacoby – but the only cicada heard all morning, this afternoon one more. Along the way to Xenia, tall bellflowers were in full bloom, like the campanula here at home. I saw early germander, full catnip, budding burdock (none of it open), blueweed turning black – just a few late flowers, white sweet clover ending its cycle, a few pokeweeds with green berries, the first Jerusalem artichoke, a lobelia in full bloom. The first woolly bear caterpillar of the year crossed the path in front of me.

2000: Resurrection lilies in full bloom both here and in Wilmington. Tonight, I went outside at eight o’clock. The last birds were going home, the last swallows were flying over the yard. When the fireflies started to signal at 8:05, the birds had disappeared. I saw bats at 8:10, heard crickets at 8:15.

2001: First cardinal at 4:40 a.m. Screech owl whinnying at 4:50. Early hostas, the Francis Williams, have completed flowering. Hollyhocks eaten by leafminers. But the pink mallow and the lilies keep their color, and the annuals, zinnias and cosmos, help to hide the end of pervious perennial sequences, help to create links and tie together, prolong, introduce.

2003: In Wisconsin: Parsnips, purple coneflowers, daylilies, bellflowers, Asiatic and Oriental lilies, and monardas early full, some prairie false indigo. Much lopseed and agrimony in the woods. Arrived back in Yellow Springs at 8:30 p.m. to find the first stargazer lily open, several more zinnias and the first dahlia unraveling.

2004: The last Oriental lilies fade. A Judas maple seen on the way out of town. In the backyard, a patch of yellow leaves on the white mulberry. In the triangle park, a few crabapple leaves are turning.

2005: First cicadas heard today, the latest date since I started to keep track. They all seem to have emerged at once after the arrival of a cool front last night. And they are late, in spite of a July full of hot and muggy weather. The early part of the month, however, was dry. Did that keep them in the ground?

2006: Cardinal song steady from 4:30 a.m. A tiger swallowtail visited the hosta flowers this morning. The red monarda is beginning to fade.

2008: Cardinals strong at 4:50 a.m. Robins and a blue jay faint in the background. One tiger swallowtail and red admiral this morning. Cicadas heard at about the same time as yesterday, 8:40 a.m. Fledgling grackle being fed by male. Squirrels chattering. Throughout the afternoon, the clucking of grackles in the woodlot trees. In the alley, several blue morning glories have come in, and a few small white bindweed flowers are open.

2009: Rick heard his first cicada north of town yesterday. Sitting on the back porch this noon, Jeanie and I heard our first. Lilies declining rapidly now, all the lily trees done, and one of the front daylilies. Along the road to Xenia, great mullein blossoms are at the top of their stalks. In town, common ragweed is past knee-high, one plant seen budding. In the alley, blue morning glories are in bloom.

2010: Last night, long robin vespers around 8:00 finally drowned out by the screaming katydids. This morning, crows loud, raucous in the back trees at 5:00, cardinals in strong, steady song. Then quiet by 6:30. In the alley after breakfast: green windfall apples, the first burdock burs, large green berries on the panicled dogwood.

2011: First pink phlox opened overnight. Many of the stella d’oro lilies have developed new buds; they stopped blooming at the end of June, seem to be recovering now for late July and August blooms.

2012: At 5:15 a.m., cardinals and robins were in full song, nothing of the softening of birdsong that I have been expecting. Crows were up then, too, and the tree crickets were loud and steady. Eight lily plants in bloom this morning. Sparrow fledglings begging. Field crickets chirping throughout the neighborhood in the evening.

2014: Twenty-seven lilies still in bloom today, but the drifts thinning. Heavy fog this morning, patches of gossamer on the grass, webs of Early Fall. First hummingbird moth seen in several weeks working the monarda along with the bees. Brief walk at John Bryant Park, from the lower parking area up the stairs toward the campground, a simple habitat, it seems, dominated by lopseed almost all blooms complete.

2015: Twenty-nine lilies in bloom today. Jumpseed plants are budding. Blue vervain full bloom in the field across from Ellis Pond.

2016: Twenty-three lilies this morning and about the same number of blossoms. A female hummingbird at the tithonias, zinnias reaching early full, Joe Pye weed heads are violet now, just at the point of bloom.

2017: Forty-two lily blossoms, twenty-one blooming plants. The pace of Deep Summer remains steady: the lilies declining at the same rate as in years past, Joe Pye and zinnias like in 2016, jumpseed budded, spiderwort almost complete. Late in the afternoon: a newly emerged male tiger swallowtail, the first in the garden this summer. Steadily peeping robins in the honeysuckles, a different rhythm than that of fledgling guidance.

2019: Heat wave continues for the third week, heat index above 105 degrees. One hundred fifty-seven day lily blossoms, 18 ditch lilies. At the pond, burdock has started to flower. Like two years ago, a new tiger swallowtail explored the north garden. This evening, for the first time this year, katydids were calling.

2020: More heat. A third hummingbird moth seen in the bee balm. Lily count: 160 day lily, 18 ditch lily blossoms. Small, one or two- inch size pods on the milkweed. No katydids this evening. Along the road to Ellis north and Xenia south, the Queen Anne’s lace are in their prime, parsnips and hemlock browning and to seed.

Repetition often removes the distinction between immediate experience and memory. In the case of the seasons, for example, it blurs the line between one summer and the next. All summers become one summer. The observation of one flower during one year merges with those observations in the past and future. The years become one year, reflection and hope indistinguishable. Time loses its power. Change becomes layered, full of connecting radii, consciousness free.