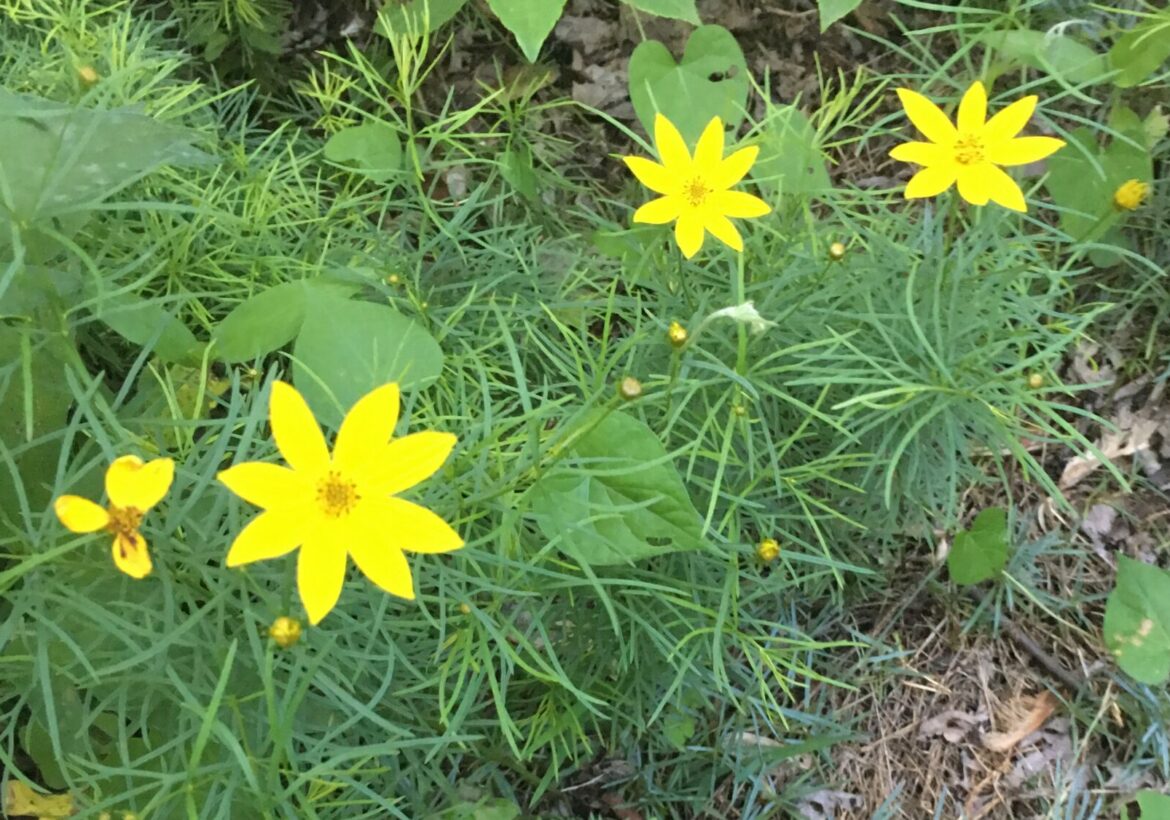 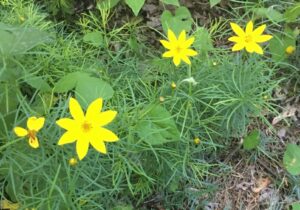 The earth is all before me. With a heart

Joyous, nor scared at its own liberty,

I look about; and should the chosen guide

Be nothing better than a wandering cloud,

I cannot miss my way.

The chances of precipitation rise to 30 percent today. Sun, however, is still the rule, with completely overcast conditions occurring just 15 percent of the time. Highs are usually in the 80s (seven days out of ten), climb to 90 fifteen percent of the time, reach only the 70s another 15 percent.

1987: To Kentucky: Orange butterfly weed common by the roadsides below Cincinnati. First corn tassels seen in southern Ohio, angelica all gone to seed. Some sycamore bark has fallen. Teasel blooming near Lexington.

1993: Home from Houston to a whole new season. The black and red raspberries are coming in now, the Asiatic lilies are in early full bloom, first yellow daylily in the yard. Mid-season hosta budding along the north wall, seen blooming other parts of town. The garden is overgrown, lettuce all gone to seed, tomatoes with fruit an inch in diameter, the second crop of radishes ready to pull, the carrot patch filled in with foliage, the rows indistinguishable. The carnations are done after just seven or eight days, and the sweet Williams have decayed, are tattered and fallen. The cosmos are waist high, some of the first flowers starting. The tall yellow yarrow is open, and the Queen Anne’s lace is taller than the rose bushes, the first head blooming. Cherries all red now, branches hanging heavy and low.

2007: First dark green midseason hosta flowers open. First violet monarda blooms – the red are in full bloom. Sticky buds noticed on the burdock in the alley. All morning, robins have been peeping something like their autumn migration call, but this is faster and more intense – still, not a whinny. More rain last night, the drought certainly at an end in Yellow Springs.

2008: The lone female grackle was back this morning, and the red-bellied woodpecker called twice. Mulberries are still coming in, Don’s cherries are holding, and more alley raspberries are ripening. White “fuzz bugs” noticed on some struggling astilbe. Heavy rains last night toppled two dahlias. In the vegetable garden, spinach to seed, but lettuce and chard are lush. The first Japanese beetles appeared on the ferns this morning, and inch-long praying mantises were in the ferns and lilies. One rose full of Japanese beetles in the afternoon. In the pond, fingerlings continue to emerge; some are now maybe half an inch, others barely visible. One red-bellied woodpecker call heard this noon, one orange fritillary seen.

2009: Gethsemani, Kentucky:  I am used to being here in the fall. Today is so hot, the humidity so high. But I begin to walk and look about in the fields before the sun gets higher and I get too tired.

A reading from Genesis at the service this morning: Abraham’s aged wife, Sarah, mocking the angels (disguised as travelers) who had promised her she would bear a son in her old age. Of course, against the odds, the child appeared.

I wander out onto rolling hills, past hay in great round bales, into patches of tall violet monarda and knapweed full of honeybees, bright orange butterfly bushes full of butterflies, white Queen Anne’s lace and yarrow, long drifts of daisy fleabane, the pathway lined with vervain and powder-blue chicory.

I ruminate about Kent Ryden’s assertion that place or landscape exists only as a projection of the mind, that the land is not only dependent on our perception but takes its nature, its characteristics from what we formulate its shapes to be. Place is structure that seems so distant but is actually inside us, constructed by us, an outcropping of our vision.

After an hour in the sun, I retreat into the dark and the shade of the forest. I accept the cool with the mosquitoes. The Deep Summer woods offers only fragments of color: a few avens, a lost fleabane, one pale wild petunia, some small yellow sorrel.

I take the foliage for granted, dismiss its dominance that shadows the path in spite of the protection it offers me in sassafras, pawpaw, locust, walnut, yellow poplar, creeper, sycamore, and in spite of the fact that it is so ephemeral and that at any moment it will start turning, become mottled, and then disappear into autumn.

I walk past the religious sculptures placed a long the walkway, every few hundred yards a Virgin Mary, a St. Francis, or other storied figure. I think about the written requests placed at their feet, consider miracles. Then at the end, I come across three angels disguised as statues. Landscape as the figment of my mind: What will these three promise me?

2010: I just noticed that Mateo’s rose of Sharon is in full bloom – then I came home to find some of ours open, too. On the privet bushes in front of the Champneys’: first small berries. When Bella and I walk to the alley at 9:30 this morning, twittering of sparrows, clucking of robins, some scrawing of the starlings. Baby sparrows being fed by parents at the feeders. Red admiral and a black swallowtail at the butterfly bush today. Corn tassels just emerging from the great tall fields on the way to the interstate.

This afternoon, my friend Don Wallis wrote: “As to the South Glen woods, my real-life home: yes, on the First Day of Summer the ticks took over — they’re thirsty for blood, skin oil, scalp juice, etc. Since I have no Bella, the dog, they travel home on my body, and yeah, I got a houseful myself. Spiders, too. Rude guests — demanding of attention. Always restless and hungry. They never sleep. Plus, I itch. Damn. It’s not right. It’s not fair. What the hell is wrong with Nature?” Of course, no one loves it more than Don.

2011: Cardinal loud at 4:24 a.m., then calling for several minutes. Robin chorus continues. At 9:00, grackles clucking, then feeding their fledgling at the feeder. Blue jay restless, red-bellied woodpecker still calling. Then sparrows all around, screaming and feeding their babies. In the alley, more grackle clucking and another baby hopping in TK’s yard. Through the afternoon, feeding and calling. Strong robin vespers near sunset, punctuated with cardinal song.

2012: Robins at about 4:20, but their chorus was relatively faint, and lasted only until a little after 5:00. A cardinal first sang at 4:29, and cardinal song lasted maybe half an hour. The last primrose flowers gone today, last of our ditch lilies (but they are still common throughout the area). Still thirty different lily plants in bloom today in the garden. Starling fledgling being fed by the pond early this afternoon, and a spicebush butterfly came by the pond, too. Some cardinal song at my walk this evening. Jeanie heard cicadas, the first so far, at dusk.

2013: Pokeweed flowering, some setting green fruit. One Osage fruit, about a third of its full size, on the sidewalk this morning after last night’s rain. Ten different lilies in bloom – but many more are budded. Saw the first Greene County wheat field being cut.

2015: Thirty-two lily plants in bloom this afternoon, my transplanting of last year producing many more blossoms at this point than in earlier summers. The lush motherwort plant at the northwest corner of the yard has finally reached the end of its flowering, its leaves even drooping. Purple coneflowers and Queen Anne’s lace in early bloom at Peggy’s and at the Women’s Park and downtown.

2016: From last night’s storm: a black walnut the size of a golf ball and an Osage twice as big came down. Forty-two lily plants in bloom this morning, 11 alone in the circle garden. The Stella d’oros have completed their season here. And I found the first Japanese beetles in the north garden. Two hackberry butterflies seen in the yard today, one great spangled fritillary yesterday.

2017: Thirty-two ditch lily blossoms, 39 day lilies, three Asiatics. Unusually cool this morning and through the day, low 50, a high of 71.

2019: Fifty ditch lilies, one Turk’s cap, two Stella d’oros this morning, and one of the tall tree lilies opened this afternoon. The primroses still offer color by the new peach tree, and the spiderwort is lush near the red cannas. Steady blue jay calls heard in the late afternoon. Two sulphur butterflies seen on my jog at Ellis.

Often I am permitted to return to a meadow

as if it were a given property of the mind

that certain bounds hold against chaos,

that is a place of first permission,

everlasting omen of what is.