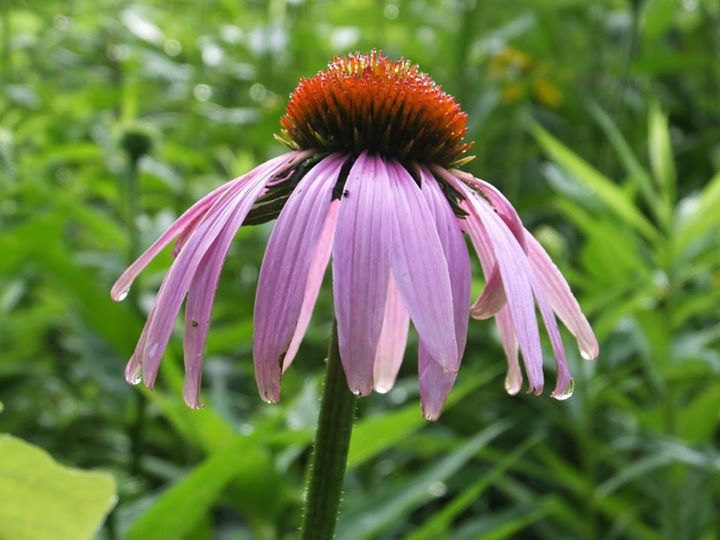 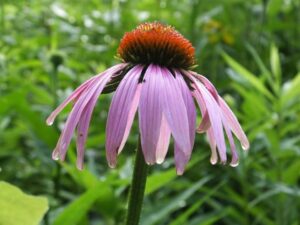 With all your harvest-store of olden joys,

And drowsy dawns, and noons when golden grain

Nods in the sun….

Chances of highs above 100 degrees today are five percent. Nineties come 15 percent of the afternoons, 80s seventy percent, and 70s just ten percent. Precipitation falls on only 15 percent of all June 25ths, making it one of the drier days of the entire year. The sun appears 95 percent of the time.

Cattails are almost fully developed. May apples are ready to harvest in the woods. Blackberries have always set fruit, even in the coldest years. Black walnuts are about half their full size, Osage fruits the size of golf balls. Ditch lilies reach full bloom, Asiatic, Oriental and standard daylilies gather momentum, pacing the monarda.

1987: Regressing in time, north to Wisconsin: multiflora roses coming back into bloom as I drove, the fields becoming brighter and greener than in Yellow Springs, shining with more gold, violet, blue.

1993: Returning to Yellow Springs from Houston, Texas, I saw parsnips going to seed through Kentucky, and nodding thistles, which had been so strong a week ago, decaying. When I got home, mallow was open in the south garden.

1997: Great mullein seen open along Brush Row Road. Potentilla in full bloom in town. Snow-on-the-mountain fading at the same rate as the poison hemlock.  Privet season is over.

2002: Driving west and north from Yellow Springs: The habitat remained relatively stable between Ohio and Iowa, but by the time we passed Iowa City, the wheat had changed from gold to a dusky blue- green. White false indigo found in late bloom near Iowa City, some pink spirea full, some finished there. Hot and dry throughout.

2003: At 4:05 this morning, the robin chorus was strong. Doves and cardinals had joined in by 4:55. Two robins seen mating across the street at 6:35. When I walked Bella, I found a small Osage fruit about an inch and a half in diameter, still covered with the fibers of its flower stage. First red monarda in the south garden today.

2004: Milkweed is in full bloom at South Glen, but there were no milkweed beetles to be found.

2007: Black walnuts in the alley were at least half size. The birds were very quiet yesterday and this morning. Grackles seem to have left, and all the frantic chatter and the feeding of young have ended. Midseason hosta are fully budded, the Frances Williams bicolor hosta is in full bloom now. In the pond, the lizard’s tail has passed its best.

2008: At the back bird feeder, a young dove and a young female grackle scrounge seeds thrown out from above by the sparrows. One large fritillary butterfly came to the garden early this afternoon, seemed to have a wingspan of at least three inches (a great spangled fritillary).

2010: The first monarch of the year seen in the north garden, sipping from the lilies. Its colors were fresh and bright, and it rollicked from flower to flower. A very young black swallowtail came to the butterfly bush after lunch, then a fritillary. Some soybeans are now almost knee high, corn still not tasseling. Jeanie heard cicadas again this morning, loud and close by. I got my first chigger bites when I mowed the lawn.

2011: To Hueston Woods west of Yellow Springs for the weekend: Inventory:  chicory, all the clovers (white, red, yellow sweet clover, white sweet clover), Rugosa roses, elderberry, yellow and orange touch-me-nots, Canadian thistles, cattails tall, enchanter’s nightshade, honewort, daisies, daisy fleabane, avens, parsnips, hemlock, Queen Anne’s lace, Deptford pinks, one cinquefoil, ditches full of common orange daylilies, and black raspberries just starting to come in. Along the back road, as we returned to Yellow Springs, we saw so many killdeer and doves and blackbirds (whereas most of the other roads were empty).

2012: Cardinals and robins heard when I got up this morning at 4:20. No birdsong this evening. Primrose and pink spirea gone. First hummingbird moth seen, and the first blueberry in the yard was ripe.

2013: Walking Bella at 8:00 p.m.: Robins and doves calling. Black mulberries falling, privets blooming, cottonwood cotton on the street. Full ditch lilies and new Asiatics, yucca throughout the walk. Saw Ed Oxley who talked about how he would sometimes see his cottonwood trees send out a cloud of cotton, then stop for a few hours, and then do it all again, “like snow falling,” he said, waving his arms. Ed also said that he’d seen a farmer cutting wheat. So the harvest is beginning in southwestern Ohio..

2014: Again, eleven different lily plants in bloom, and this morning, one deep red one, my favorite, a new Asiatic I must have purchased just before Jeanie died. The bright garden primroses along the north fence are down to just a few blossoms – while the tall sundrops (oenothera fruticosa) have opened on the other side of High Street. In the pond, lizard’s tail is at mid bloom.

2015: In the yard, many things are similar to last year – except that there are twenty-two lily plants open. This year I have my own Oenothera fruticosa and  a few that have survived the phlox beetles have put out one or two flowers apiece. Some of the common green hostas are flowering in the east wall garden. Monarda a mass of red. At the Women’s Park, milkweed, heliopsis, violet monarda and purple coneflowers  are all at various stages of early bloom. Two polygonias seen today. Blue jays talking back and forth through the evening, talking to fledglings.

2016: Forty lily plants in bloom today. Great spangled fritillary (and numerous bees) in the bee-balm. Cottonwood continuing to build up beside the street near Jill’s house. Avens and daisy fleabane full.

2017: Forty ditch lily blossoms, three Asiatics still, thirty-three day lily blossoms, no Stella d’oros, no primroses. The deer continue to take the buds off the lily plants, another half dozen last night in spite of the repellant spray.

Dignity and beauty and meaning are given to our lives when we see far enough and wide enough, when we see the forces that minister to us, and the natural order of which we form a part.