When sunset reaches its earliest time of the year, the brittle leaves of the pear trees fall. This is the time during which the second bloom of forsythia flowering ends, when witch hazel blossoms wither, and the last of the beeches, the willows, osage and oaks come down. 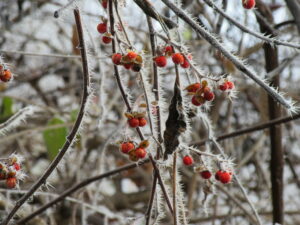 The corn and soybean harvests are usually complete all around the country, and development of winter wheat slows in the cold. New garlic shoots are firm and green, but they have stopped growing and remain at their late-autumn height. The Christmas tree harvest has begun, and the last poinsettias have come north.

Even though this is one more time of endings, it is not a time of stasis. Spruces grow fresh needles. Caraway and henbit sometimes flower in the sun, and a dandelion or a periwinkle opens in fields and lawns. Fresh chickweed, which sprouted at the end of the summer, blossoms. Catnip sometimes grows back beside thistle, moneywort, chickweed, wild geranium, leafcup, henbit and yarrow.

In greenhouses and sunrooms, tomatoes sown in July ripen in spite of cold and snow. Marigolds, zinnias, impatiens and other bedding plants saved from the cold may still be flowering. The first buds have formed on mother-of-millions. Yellow and pink hibiscus flowers open before dawn, fading and falling by three in the afternoon.

As early winter settles in across the center of the Northern Hemisphere, the colors of the newly revealed landscape catch the eye more easily. Hawthorn berries, holly berries and rose hips stand out now. Brown-barked river birches, white birches and sycamores contrast with the black trunks of oaks and elms. 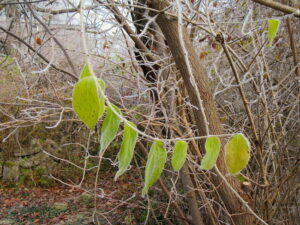 Red-twigged dogwoods shine against the snow. Raspberries keep some purple to their leaves. Coralberries still hold their magenta. Japanese honeysuckle, like the pines, spruce and juniper, is still green. All the bittersweet hulls have fallen from their vines, but many of the orange berries remain attached.

The clear springs that wander through the river bottoms are streaked with cress, ragwort and buttercup foliage, oases of summer, almost never overcome by winter. Now barberry shows off its scarlet berries better than at any other time of year. Blood-red staghorns remain on the sumacs. In the garden, hardy flowering cabbage and kale show off their rainbows under clouds or sun.

Without snow and ice, the leaves dapple the ground with brindle chromatics, bronze, cinnamon, hazel, fawn, chocolate. The champagne seed heads of the goldenrod and ironweed, the soft russet of the knotweed foliage, dead but hanging to its stubborn six-foot stalks, are set against the dove-colored sky, perfectly imaged in the gloss of the quiet river that inverts and so compounds their glory.

As daylight starts to increase after solstice, spring is waiting: new daffodil and tulip leaves lie just below the surface of the mulch, and the tips of crocus crouch in their beds. 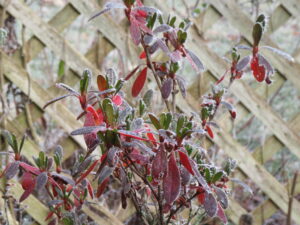 Deep in the woods, the earthstar fungus appears, shaped like a six-pointed star. White-tailed bucks in gray winter coats drop their antlers. Multiflora rose buds swell in the sun. Precocious pussy willow catkins crack in the thaws. In warmer microclimates, moss can be long and flushed.

Sometimes a fat camel cricket emerges in your kitchen at night, searching for sustenance. In the warmth of greenhouses, bedding plant seeding is fully underway, and young plants scheduled to be sold in April and May can have four to six leaves by now. On farms, expectant ewes, does and cows quietly nurture their babies to be born in early spring. In the chicken house, pullets which will    produce summer eggs are hatching.