All that I had dreamed was true, is true.
The earth is fair, more fair
Than I had known or imagined.

In the early spring of the Ohio Valley, islands of new life emerge from the waves of warmth and cold that move across the landscape. Within these islands, often separated from each other by broad expanses of chilling winds, weeks of gray skies, sometimes only narrowly divided by a night of frost, the season reveals its stunning topography.

Early spring is an archipelago of forms rising out of February’s great sea, and like ephemeral atolls, the events of this temporal, mottled continent multiply, swell, and recede to alter the face of our habitat with an inexorable beauty. The geography of early spring is fixed in shape and order but not in time. The archipelago of winter’s end is fluid, what chronologists call a “floating sequence,” a sequence the dates of which are relatively well known in relation to one another but not in relation to when exactly they will occur on the brittle Gregorian calendar.

Observation and memory, however, easily decipher the secret code of the floating sequence, uncover the fluid terrain from which fauna and flora materialize, and spread a map of promise across the seemingly uncharted expanse of winter. In Yellow Springs, early spring fills the six weeks between the middle of February and the end March. This month and a half links the deep cold with the lushness of April, and it is made up of constellations of color, motion and sound, and musterings of new sprouts and leaves, birds, insects, mammals and fishes. In the South, this season can arrive in the middle of the year’s first weeks; along the Canadian border, it comes in May. Wherever the floating sequence begins, it follows something of the order below; no matter where it takes place, the following landmarks are only fragments of a far greater ferment.

Starting with a major thaw well after solstice, the first cluster of spring’s appearance takes the form of snowdrops and aconites flowering together in the warmest microclimates beside the prophetic hellebores and Chinese witchhazels of late January. Within a few days, snow crocus and iris reticulata complete this island of time at the chilliest edge of spring. 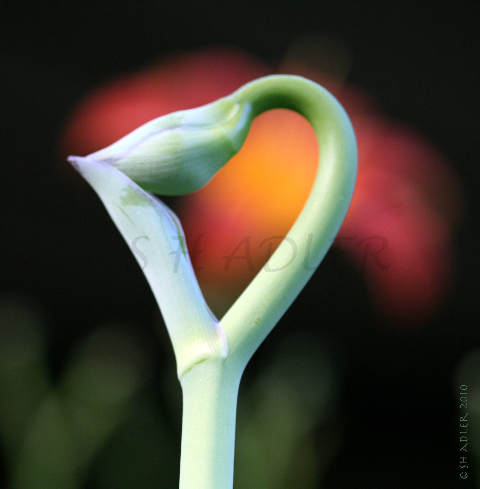 A parallel cluster rises from the swamps: the skunk cabbage blossoms at Jacoby. In alleyways and lawns, common chickweed, dandelions and henbit complement the cabbage. Above them all, red-winged blackbirds stake out different limits. Ducks and geese follow the lead of the blackbirds, marking ownership of the more favorable river sites for nesting. Migrant robins join the sizeable flocks that overwintered in the woods and cities.

Past the seasons of the snowdrops and aconites, midseason crocuses initiate more complex configurations that lead to fat pussy willows, bright blue squills, delicate yellow jonquils, then to the full-size daffodils, then to purple grape hyacinths, then to pale wood hyacinths and pushkinias.  Towering on the horizon, silver maples and the red maples and box elders prepare to fruit.

To these outcroppings come the pollen seekers: the honeybees and carpenter bees. Other creatures follow. Mosquitoes and newborn wolf spiders look for prey. The mounds of ants rise from winter’s prairie. In rivers and ponds, water striders mate. Earthworms come out of hiding, lie together in the mild night rains. It is salamander season in the slime and snake basking season in the sun. Spring peepers peep.

Then the root and insect eaters become active, joining the beavers that have been cutting trees and eating bark since January. Groundhogs dig up the hillsides. Opossums, skunks, raccoons come seek their mates and sustenance. Turkey vultures circle the roads looking for road kill. Wild turkeys start to call. The first woodcocks spiral in the woods. In the village, the tufted titmouse spirals, too.

When pussy willows are at their peak, new configurations take shape, adding multiple pathways to all the recent temporal spaces. Into the world of pussy willows come the white magnolias in town, snow trillium along the rivers, spring beauties in the woods. Across the bottomland, soft touch-me-nots sprout, coveted ramps push up their medicinal foliage to pace the stalks of daylilies, rhubarb and precocious bleeding hearts.

When pollen covers the pussy willows, then honeysuckle, mock orange, privet, wild multiflora roses, lilac, black raspberry and coralberry leaves break out from their buds, a signal for cornus mas and lungwort to flower and for mourning cloak butterflies and cabbage moths to navigate the channels of equinox. A few days later come the question-mark and tortoise-shell butterflies and then the white-spotted skippers.

In the last few days of March when the pussy willow catkins start to fall, the archipelago of early spring becomes a dense maze of islets unimaginable at the end of February. In the trees, the finches turn gold. In ponds, the toads are singing. Calves and lambs appear in the fields.  Carp are frolicking in the rivers. Young opossums come out to play. Wasps crawl from their winter crevices.

In the garden, the early tulips unfold. Star of Holland comes in beneath the bright forsythia. Buckeyes unravel. Plums bloom. And just as skunk cabbage starts to produce its foliage, the first tremendous mass of wildflowers suddenly opens all at once on the farthest and mildest border of the early spring archipelago: inflorescence of periwinkle, hepatica, violet cress, harbinger of spring, bloodroot, Dutchman’s britches, bittercress, twinleaf and Virginia bluebell leading now into the endlessly intricate paradise of April