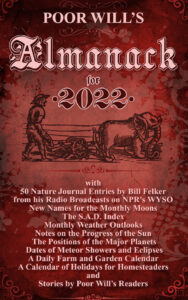 A guide to living in harmony with the Earth and the sky. Each month contains essays on what is happening in nature. That includes not only what happening in the landscape but what is going on with the sun, the planets and the moon (with new moon names, too). The S.A.D. Index allows the reader to see how the weather, the days length, the amount of cloud cover and the moon are likely to affect mood and attitude. A daily field and garden calendar complements a comprehensive list of marketing holidays for homesteaders. And reader stories by Poor Will’s readers offer the best in Americana.

Poor Will’s Almanack is divided into 15 sections, one for each month between October 2021 and December 2022. The months contain the following sections in the following order:

Position of the Sun

Phases of the Moon

Positions of the Major Planets

Daily Suggestions for Farmers and Gardeners

The Journal Entries by Bill Felker

The October 2021 and December 2021 chapters contain one personal journal essay. The remaining 12 chapters each begin with four journal entries that reflect my experiences with suburban nature.

In these essays, most of which I wrote for my column in the Yellow Springs News, The Dayton Daily News and the local NPR station, WYSO,  I look for the strata of seasonal time and try to tell something of my story with them.

It is a story about discovering home and myself. As I explored and became close to the habitat of my neighborhood, I found a wider garden entangled with the layers of my emotions and ideas. My notes took the form of a daybook from which I made an almanac with which I follow the year over and over.

Most days I write an entry about the weather or what is blooming or not blooming in the garden, what is happening to the trees or with the birds. In my daybook notes, I find that the repetition of events in nature from year to year creates a kind of radial time, a deep time that connects cycles and removes the distinction between experience and memory.

Repetition is the source of temporal layering, which is the scaffolding of deep time. With memory, repetition and layering blur the line between one summer and the next. All the years become one year.

Information on the moon, the planets, the stars, sun and shooting stars is based on Astronomical Phenomena for the Year 2021 and 2022, U.S. Government Printing Office, as well as on personal observations from along the 40th Parallel in the Northern Hemisphere.

The weather estimates in this Almanack are based on my charts of fractal weather patterns made between 1978 and 2021. Poor Will’s Almanack for 2022 integrates lunar forces with an outline of  weather systems, noting how the moon’s phase and proximity (perigee or apogee) to Earth could influence frontal behavior.

Readers of my weekly and monthly columns throughout the United States have used these estimates successfully since 1984.  For best results, readers in the East should add one to two days to specific days mentioned in the overviews.  In the West, subtract one to two days.

Major high-pressure systems cross the United States an average of once every five to six days, and approximately 80 significant highs cross the Mississippi River in a year. Fronts move more quickly in the colder months; October through March can bring up to eight waves of high pressure every 30 days. The warmer months between April and September are more likely to have six or fewer fronts; June, July and August sometimes only produce two or three systems that create stormy weather.

This regular pulse that characterizes the planet’s atmosphere was first recorded in detail by 16th century almanackers. It still forms the basis for annual predictions in oday’s commercial almanacs, and can be used by anyone who keeps a weather journal to gauge the likelihood for rain or sun, heat or cold on any given day.

Certainly, modern technology offers more precise short-range forecasts than “almanack weather” descriptions, but knowledge of repeating patterns can help to create a scaffolding with which to measure time in the larger context of the seasons.

And while climate change may increase the severity of particular weather systems, it appears, so far, that the regularity of those systems and the moon’s influence on them continue to be helpful in anticipating the approach of extreme conditions.

Note: Complete almanack weather information and guidelines are available in The Weather Book of Poor Will’s Almanack from on-line bookstores.

Current medical opinion suggests that the human brain may need a certain amount of sunlight for maximum well-being and that seasonal fluctuation of the body’s natural clock can often bring on shifts of outlook and mood.  Sometimes seasonal imbalance can be debilitating; when it is, the problem is often called S.A.D. or Seasonal Affective Disorder.

Knowledge is perhaps the best defense against S.A.D., and the S.A.D. Stress Index contributes to that knowledge by measuring the natural phenomena which are assumed to be related to S.A.D.—the day’s length, the percentage of  sunlight available, the weather, and the phase of the moon.  In order to create the Index, each of those factors was given a value from zero to 25, and then the four values were combined onto a scale of one to 100.  Interpretation is simple:  the higher the number, the greater the forces that could cause seasonal stress.

Index readings are most useful in combination with a record of your own moods.  Reference to the Index when you feel out of sorts may be a way of getting a feel for how seasonal affective disorders influence your life.

Average pollen counts are based on average counts made in the central states during the latter years of the 20thcentury. Data show general trends based on typical weather patterns and floral cycles.

The following moon names used in Poor Will’s Almanack suggest events related to seasonal change in the natural year at average elevations along the 40th Parallel. The days listed are for the new moon of each month.

May 30: The Hummingbird Moon

September 25: The  Blackbirds in the Cornfields Moon

According to a number of studies, the moon exerts less influence on ocean tides and on human and animal behavior when it comes into its 2nd and 4th quarters. Therefore, it might make more sense to perform routine maintenance on your flock or herd near the date on which the moon enters its second or fourth quarter.

On the other hand, tidal lunar influences have been proven to be greater at full moon and new moon times. You might expect more trouble with your animals, therefore, on or about new moon and full moon. Livestock care should be less eventful during the relatively stable times between frontal systems listed in each month’s weather section (but before the barometer starts to drop below 30.00).

Although successful fishing is influenced primarily by the aquatic habitat, the type of bait used and the location of the bait in the water, the times of day, month and year are also

significant. Lunar position has been shown in some studies to be a contributing factor to fish and game activity, but the approach of weather systems (high-pressure systems typically preceded by low-pressure systems) is usually a more decisive factor than the moon in influencing fish to bite and animals to feed.

Along with the moon and the weather, water temperature and other seasonal factors play a role in how fish respond to bait. One of the best ways to measure those factors is to keep a journal of conditions and of what is happening during your outings. And an almanack may be helpful in making you aware of what is going on in nature. This is especially true for hunting, since conditions in the fields or woods have a direct impact on creatures living there.

See the Peak Activity Times for Creatures section of each monthly section of the Almanack for a guide to lunar position and corresponding behavior. Then check the arrival dates of weather systems in the Weather Outlook for each month.