Containing New Names for the Monthly Moons, Weather Trends, Notes on the Progress of the Sun, the Position of the Major Planets, Dates of Meteor Showers and Eclipses, and a Calendar of Holidays for Farmers and Gardeners 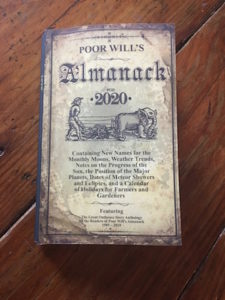 by the Readers of

In addition to weather and astronomical information, Poor Will for 2020 contains a  fine collection of sixty outhouse stories by the readers of his Almanack. Here is an introduction to that collection:

We had stopped at the roadside rest/ Because of Mother Nature’s call./I read a bit of sin and crime/Written on the outhouse wall.

My parents had kept me sheltered/From worldly ways and worse,/So imagine then my shock/ To read an obscene verse!

I loved the words and poetry;/ Memorizing was an easy endeavor./There I read the shocking words /That I will remember forever.

I worry about the youth today./ Will they have stories to recall?/For they have no chance to sit/ And read such things on an outhouse wall.

Rita Turnwald from Fort Jennings, Ohio earned first prize, ten dollars and a hand lettered certificate from Poor Will for this entry into his Almanack’s outhouse poetry contest many years ago. Rita beat out the other contestants partially because of her ingenuous praise of privy verse and partially because her creation packed a lesson.

She worried “about the youth today. Will they have stories to recall?” It’s most probable they won’t have outhouse stories to recall. Outdoor plumbing is history in most of the United States, and even graffiti seems to be losing favor, prey to social media, as well as to improved, modern cleansers and slick, synthetic, indoor tiles.

Still, outhouse poetry and prose are not dead yet.

Thirty-five years ago, the first Poor Will’s Almanack appeared as a column in The Yellow Springs News in Yellow Springs, Ohio. Toward the end of the 1980s, Poor Will began soliciting reader contributions, and “Almanack Literature” was born.

People submitted all kinds of things for the column: memory stories, narratives about birthday parties, about unusual occurrences, about falling in love, about their favorite animals…and about experiences in their outdoor bathrooms.

The 60 short tales included in this edition of the annual Poor Will are the best of those privy submissions.

There are, however, few young authors among these contributors. The submissions are, by and large, written by men and women who grew up in the first half of the 20th century. Most of the writers in this collection were in their 60s or 70s when they sent stories to the Almanack, with the most frequent correspondent, Naomi Bliss from Charlestown, Indiana, pushing 90 at the time of her submissions.

The privy tales of this generation give a gentle and benign cast to Almanack Literature. The stories which have appeared in Poor Will’s Almanack, are pure and telling impressions of a people who are good humored, shy, whimsical, disarmingly honest, forgiving and afraid of the dark and the unknown.

In this anthology are stories of falling into the dark pit, of coming of age in the privy, of bees that drive dignified ladies out into the sun, bloomers at half mast, as well as stories of finding peace and the meaning of life sitting and looking out from the primitive accommodations across the hills of northern Kentucky.

In all of those, there is the same nostalgic view of the past and a quiet lament for the end of an era. James Whitcomb Riley sang that tune in his “Passing of the Backhouse” a century ago. “I ween that old familiar smell will soothe my faded soul,” he wrote; and like Riley, today’s writers seem to find a spiritual compensation in their memories.

Their outhouses, like Riley’s, have come to stand for their youth and for a simpler age. Stymied now in material comforts and conveniences, Poor Will’s storytellers seem to yearn for anything that will give meaning to the past, or soothe their faded souls – even the smell of their own excrement! That is an odd but telling preoccupation, a kind of scatological protest against sterile, odorless modernity.

The protesters would not necessarily replace their indoor toilets, but they commemorate a loss that is common to all Americans: the gradual disappearance of the oral family culture and the objects or practices around which that intimacy was formed.

Helen Dillon said it bluntly in her third-place entry to Poor Will’s outhouse verse contest: “Like the loss of a friend, privies come to an end.” With changes in plumbing come changes in culture. The narrative tradition follows suit.