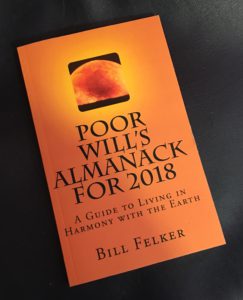 If you order two copies of Poor Will’s Almanack for 2018 at $20.00 each, you will receive a third copy at no additional charge (or in place of an extra Almanack, at your request, a copy of Bill Felker’s essay collection, Home is the Prime Meridian)

$17.00 with Book Rate Shipping (check only).If you order two copies of Poor Will’s Almanack for 2018 at $17.00 each (check transactions only), you will receive a third copy of the Almanack (or, at your request, a copy of  Bill Felker’s Home is the Prime Meridian) at no additional charge.

POOR WILL’S ALMANACK FOR 2018 offers a variety of ways with which the reader can approach the natural year:

REFLECTIONS ON THE SEASONS BY BILL FELKER include humorous essays like “Buttercup the Weather Dog,” more serious essays such as “Spring Journal on the Camino de Santiago,” and phenological descriptions like “The Hinge of Early Summer” and “Inventory in Early Autumn.”

NEW NAMES FOR THE MOONS: This year’s moons include the Frolicking Fox Moon, the Ducks-Scouting-for Nests Moon, the Termite Swarming Moon and many more. Each annual version of POOR WILL contains different Moon names that are based on an event that takes place in nature during that monthly period.

ASTRONOMICAL INFORMATION in plain English gives monthly updates about the Sun’s position, the location of major planets, the stars and shooting stars

THE S.A.D. STRESS INDEX measures the natural phenomena which are assumed to be related to Seasonal Affective Disorder: the day’s length, the average percentage of sunlight, the weather and the phase of the moon. In order to create the Index, each of those factors was given a value from zero to 25, and then the four values were combined onto a scale of one to 100. The higher the number, the greater the stress. Lunar phase and the Moon’s proximity to Earth produce the most dramatic swings in the Index. Lunar ratings are based on tidal and sociological information that suggests the Moon is most influential when it is full, second-most influential when it is new and least influential at entry to its second and fourth phases.

METEOROLOGICAL FORECASTS: The weather estimates in this Almanack are based on Bill Felker’s charts of fractal weather patterns made between 1978 and 2017. Readers of his weekly and monthly columns throughout the United States have used these estimates successfully since 1984. Poor Will’s Almanack for 2018 integrates lunar conditions with brief descriptions of expected weather systems in its “Almanack Daybook” section, suggesting how the moon’s phase and proximity to Earth could influence the character of each major shift in barometric pressure.

A CALENDAR OF FEAST DAYS for homesteaders, gardeners and farmers lists the days of the year one might expect the public to have increased interest in livestock or produce. This calendar is also useful when one is planning strategies for marketing to particular ethnic or religious groups.

THE ALMANACK DAYBOOK SECTION consists of daily gardening and farming notes, phenological information about changes in foliage, flowering and migratory activity throughout the year as well as commentary about lunar influence on predicted weather systems and seasonal stress.

READER STORIES: Readers have been contributing to POOR WILL’S ALMANACK’S weekly and monthly columns since 1985. People have submitted memory stories, outhouse tales, narratives about unusual occurrences and special animals. Each annual version of the ALMANACK features the best submissions from recent years, and the 2018 edition includes several fine outhouse tales, such as “A Terrible Outhouse Afternoon” by Willy O’Halleran and “Surprise in the Outhouse” by Aldon Cisco.